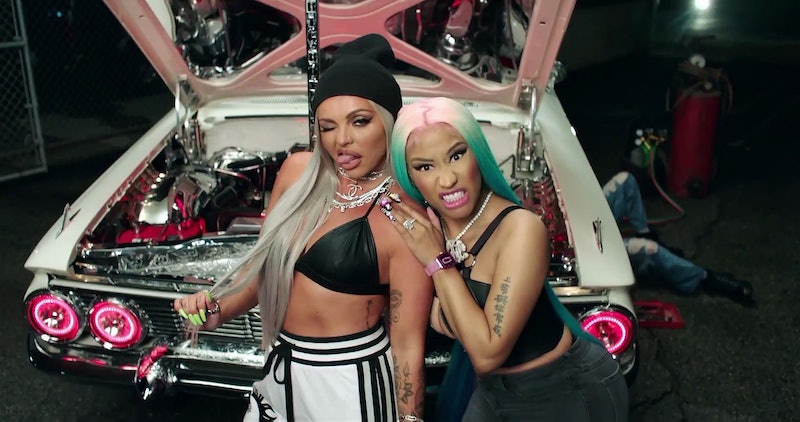 Following the release of her debut single “Boyz” on October 8, Jesy Nelson took part in an Instagram Live with her collaborator Nicki Minaj that has stirred a fair amount of controversy. Towards the end of the stream, Minaj brought up the recent blackfishing accusations against Nelson and a string of unverified messages allegedly sent by former bandmate Leigh-Anne Pinnock to an influencer.

The messages, which allegedly described Nelson as “horrible” and further accused the singer of blackfishing, prompted Minaj to called Pinnock a “jealous bozo” among other insults.

But what exactly was said during this Instagram Live, and what was the reaction? Here’s the controversy explained.

For the past few years, there has been a series of discussions surrounding Nelson and blackfishing (a phenomenon in which white people alter their appearance and behaviour to resemble those of Black or mixed-race people).

In August 2021, the issue was brought up during an interview with the Guardian, in which Nelson said, “I would never want to offend anyone, and that was really upsetting.” She added, “I wasn’t aware that’s how people felt.”

In October, Nelson gave a similar answer to Vulture and said that she had a love for Black music and Black culture. “That’s all I know; it’s what I grew up on,” she said. “I’m very aware that I’m a white British woman; I’ve never said that I wasn’t.”

In a follow-up email to Vulture, Nelson added that she would “never do intentionally do anything to make myself look racially ambiguous.”

When the “Boyz” video was released on October 8, accusations of blackfishing began to pour in once again, with viewers questioning the singer’s appearance and the aesthetic choices within the video, as well as the song’s lyrics.

Nelson and Minaj met via Instagram Live on October 11 to discuss their new collaboration and to promote “Boyz”. However, before the stream ended, Minaj decided to address the blackfishing accusations against and discuss a string of alleged messages sent by Leigh-Anne Pinnock to an influencer called nohun_. Bustle has reached out to a representative for Pinnock to ask about the alleged messages but did not hear back before the time of publication.

Minaj defended Nelson on the issue of blackfishing, stating “There’s a lot of women out here in the United States that tan, get bigger lips, get all types of s*** done to themselves. I wear straight blonde hair down to my feet when I want to, contacts… whatever. I do whatever the f*** I want. As long as you’re not hurting anybody or speaking negatively about anyone’s race or culture, you should be able to enjoy your body, your make-up, how you want to.”

Although Minaj never mentioned Pinnock by name, fans were quick to pick up on who she was referring to. Speaking in the Live, Minaj said “In terms of this situation, I’ve seen so many people utilise situations when they felt it was beneficial to them. Certain people, who might be Black and white-mixed, and now you’re attempting to be, Black this, Black that, but you may not have been doing it seven, six, five years ago, but now it’s convenient. Whatever. But what we won’t have, is putting out text messages to try and ruin someone, and to get people and influencers to talk badly about this girl. I know singers that tan a lot. It’s their f***ing business, it’s their f***ing right. It’s different when someone comes out and pretends to be Black. That’s different, from someone who goes on the beach and tans or likes how they look tanned.”

She went on to add “Take them text messages and shove it up your f**king a**, because when you do clown s**t, I got to treat you and talk to you like a clown. You don’t have to try and come out and ruin anyone. Let her enjoy this time. If you was in this woman’s group and you ain’t talking about this s**t in 10 years, and as soon as you see she got a video coming out with Nicki Minaj and Puffy, now you sending the stations for text messages and all this s**t?”

Nelson addressed the blackfishing accusations also. Despite previously saying the other members of Little Mix had not raised the issue with her, she told Minaj, “I was in a group with two women of colour for nine years and it was never brought up to me up until the last music video that I did with them.” This would have been the video for “Sweet Melody” and it seems Nelson was about to say that it was Pinnock that messaged her about it before being cut off by Minaj.

Speaking specifically about “Boyz”, Nelson said, “When I was in the video, I didn’t even have any fake tan on. I’d be in Antigua prior to that for three weeks and I’m just really lucky as a white girl that when I’m in the sun, I tan so dark.” Nelson went on to say that Pinnock used to joke about this, asking her bandmate whether she was sure that she wasn’t mixed-race “because you go darker than me in the sun.”

After the Instagram Live was finished, Minaj took to Twitter to continue the discussion. Among a series of tweets, she wrote, “JeLeigh btchs actin real messy. ~ if you know someone has been suicidal from bullying in the past, why try to get a bunch of ppl to bully them again about smthng else, on an even bigger scale? Shame on you— that’s rlly sad. You don’t know what ppl can deal with. Mental Health.”

Bustle has reached out to representatives for both Nelson and Minaj to ask if there was any further comment on events that unfolded yesterday. We did not hear back before the time of publication.

What Was The Reaction?

Following the hour-long chat, social media was flooded with commentary, with fans divided on which singer to support. While some took issue with the alleged messages sent from Pinnock to nohun_, others called out Minaj and Nelson for “mocking” Pinnock publicly.

“Jesy Nelson made an entire documentary on BBC about being kind and trolling online, but just sat and laughed as Nicki Minaj slated Leigh-Anne Pinnock to 100k viewers on a live,” TV blogger @RealityDazzle wrote. “That just not sit right with me.”

Journalist Moya Lothian-Mclean agreed, and added “I cannot stress how f***ed it is that somehow Leigh-Anne has been framed the villain in this situation ... She has said absolutely NOTHING and maintained a dignified silence in the face of her former bandmate constantly throwing s**t at her to boost her own career.”

Journalist Jason Okundaye also criticised the way “they’ve set up Leigh-Anne especially after she’s spoken so publicly about racist abuse” following another fan’s comment about her being a new mum.

Pinnock has been vocal in the past about racism directed towards her as the only Black girl in Little Mix and, in May 2021, she released a documentary discussing her experiences, called Leigh-Anne: Race, Pop, Power.