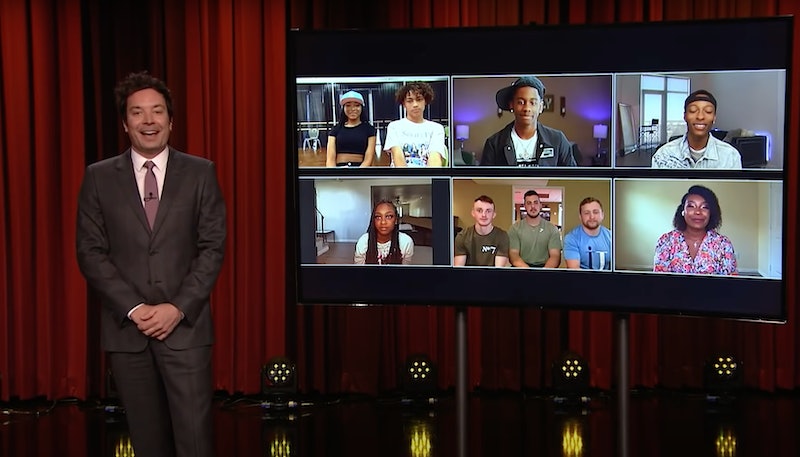 On March 26, TikToker, rising pop star, and actress-to-be Addison Rae went on The Tonight Show to chat with Jimmy Fallon and perform her debut single “Obsessed.” Her appearance also included a now-viral segment where she taught Fallon the steps to eight different viral TikTok dances: “Do It Again,” “Savage Love,” “Corvette Corvette,” “Laffy Taffy,” “Savage,” “Blinding Lights,” “Up,” and “Fergalicious.” The clip garnered a flurry of backlash from viewers, who criticized both Fallon and Rae for failing to credit the young, mainly Black TikTok creators behind each dance. Three days after the episode aired, Rae responded to the backlash and expressed interest in collaborating with the creators. On April 5, Fallon featured the TikTokers behind five of the viral dances on The Tonight Show, where they were able to share their origin stories and perform their creations.

Fallon introduced the segment by acknowledging that the creators deserved credit, though he stopped short of apologizing. “On our last show before break, we did a bit with Addison Rae where she taught me eight viral TikTok dances. Now, we recognize that the creators of those dances deserve to have their own spotlight," said the host. "So right now, some of those creators will join me to talk about how their dance went viral and perform their dance themselves.”

Rae spoke to TMZ about the Tonight Show backlash on March 29. “I think they were all credited in the original YouTube posting, but it's kinda hard to credit during the show,” she said, despite the fact that she danced in front of white signs with plenty of blank space for a creator’s handle to be added. “But they all know that I love them so much, and, I mean, I support all of them so much. And hopefully, one day, we can all meet up and dance together.”

At the time, Rae said she was speaking to the show’s producers “behind the scenes” to remedy the situation, noting that the creators “definitely deserve all the credit.” She added, “But it was so much fun. I had so much fun, and I'm very grateful and thankful. It was a great time.” She also said she “for sure” wants to work with each creator whose dance was featured. “Ever since the beginning, I've been talking to most of them and definitely want to collab with a lot of them.”

Fallon has now given the creators their time in the spotlight, though a week after delivering her comments, Rae is yet to announce plans to collaborate with the other TikTokers.

More like this
Paris Hilton Just Shared The First Photo Of Her Baby
By Sam Ramsden
Andy Cohen Apologized To Larsa Pippen After A 'RHOM' Season 5 Reunion Dust-Up
By Brad Witter
'Bachelorette' Vet Clare Crawley Unveiled 2 Special Wedding Day Accessories
By Stephanie Topacio Long
Hannah Ann Got Engaged 3 Years After 'The Bachelor' & The Proposal Was Dreamy
By Grace Wehniainen
Get Even More From Bustle — Sign Up For The Newsletter
From hair trends to relationship advice, our daily newsletter has everything you need to sound like a person who’s on TikTok, even if you aren’t.