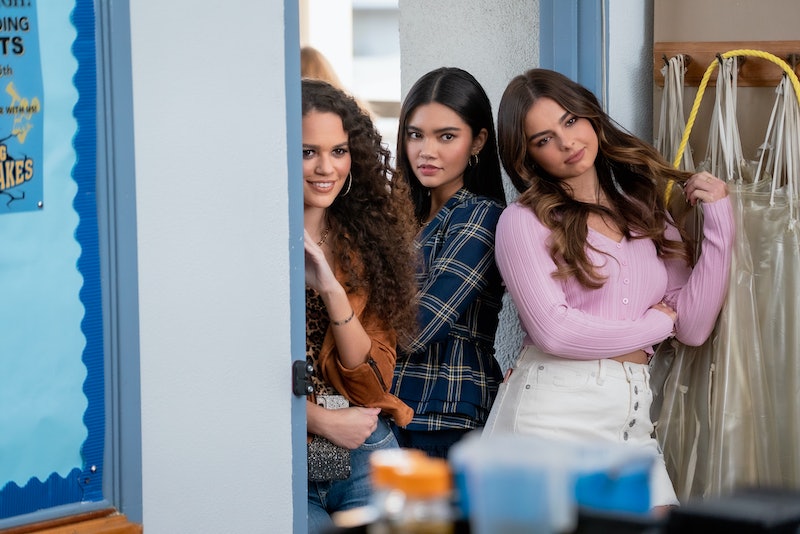 One of the most beloved teen movies of the ’90s is getting a Gen Z, gender-swapped makeover. TikTok star Addison Rae Easterling is set to star in a She’s All That remake, marking her official acting debut. Despite being new to the craft, the role is right in Addison Rae’s wheelhouse — she’ll play a popular social media influencer who is dared to make a high school nerd Prom King. As Deadline reported, Addison Rae’s He’s All That will premiere on Netflix, and coming-of-age movie whisperer Mark Waters (Mean Girls, Freaky Friday) directed the script from OG She’s All That writer R. Lee Fleming. Producers Jennifer Gibgot and Andrew Panay also returned for the remake.

He’s All That is a re-imagining of 1999’s She’s All That, which starred Rachael Leigh Cook as art-loving wallflower Laney Boggs and Freddie Prinze Jr. as popular jock Zack Siler. In this iteration, the TikToker plays Padgett Sawyer in the popular kid role, while Cobra Kai’s Tanner Buchanan plays a character akin to Cook’s in the original film. But while the movie’s plot may revolve around a transformation, Buchanan says the story is more about inner growth. "In reality, they’re both making over each other into better people, like in She’s All That,” he told People of modern updates to She’s All That. “It really holds true to the original story, but is just updated in a way that feels current … cell phones and social media are pretty integral parts of our lives now!”

Ahead, everything we know about He’s All That, including its release date and which Kardashian is making a cameo.

The He’s All That Premiere Date

According to Deadline’s sources, Netflix paid upwards of $20 million for the exclusive rights to He’s All That. On April 27, Netflix announced a slew of 2021 release dates, which included a He’s All That update. Those curious about the remake can expect it to hit the streaming platform on Aug. 27.

The Original She’s All That Cast Member Set To Return

The official He’s All That Instagram confirmed last December that Cook would appear in the remake. Alongside a photo of Rae and Cook on set, the latter’s character is described as “Padgett’s wise and caring mother.” It’s unclear whether that mother’s name rhymes with Janey.

As for whether or not Prinze Jr. will cameo in He’s All That, it’s looking unlikely. "I am not a part of it, but I have friends who are a part of it," the actor confirmed to Entertainment Tonight. Although he’s not involved in the remake, Prinze Jr. is totally supportive of its existence. "I think it's good that they're remaking it. People forget, I saw on social media somebody wrote, 'How dare they remake She's All That?' I'm like, man, it's good with me. We were a remake of a remake of a play!" Prinze Jr. said, referring to She’s All That’s loose connections to My Fair Lady and Pygmalion. "We were good with it, and we gotta be good with it, too. Every generation should have their version of art that they connect to. I hope people aren't angry about it because if you want to go see it, cool. If you don't, cool."

The He’s All That Cast

In addition to Rae, Buchanan, and Cook, one surprising reality star has also been cast in the film. Last December, Variety reported that Kourtney Kardashian would appear in He’s All That, following the pair’s highly-publicized friendship. “Studying @hesallthatmovie,” Kardashian wrote on Instagram after the news broke, posting photos of herself looking at a script. The movie’s official IG account later reposted Kardashian’s pic and unveiled her character’s identity, writing, “Introducing Jessica Miles Torres.”

The He’s All That Trailer

A brief teaser for the film, which wrapped in late December, was released as part of Netflix’s “New on Netflix” announcement on July 21. The clip shows the beginning of the set-up familiar to original She’s All That fans: Rae’s character enters into a bet to see whether she can turn a “total disaster” into Prom King, and a glimpse of Buchanan donning a dapper suit suggests her plan worked a little too well.

On Aug. 4, Netflix followed up with the full-length official trailer, complete with a remix of Sixpence None The Richer’s “Kiss Me.”

For viewers who want a closer look as they count down to Aug. 27, the cast has shared a few behind-the-scenes photos. Rae commemorated the first day of filming in mid-November 2020:

This post will be updated with additional details as more information on He’s All That becomes available.

More like this
The First Trailer For 'That '90s Show' Includes So Many Nods To The Original Series
By Jack Irvin, Alyssa Lapid and Grace Wehniainen
17 Photos Of The 'Wednesday' Cast Vs. The 1991 'Addams Family' Cast
By Grace Wehniainen
Here’s Everything Coming To & Leaving Netflix In December
By Jake Viswanath
Prince Harry Discusses The “Planting Of Stories” In Tell-All Netflix Documentary
By Jake Viswanath and El Hunt
Get Even More From Bustle — Sign Up For The Newsletter