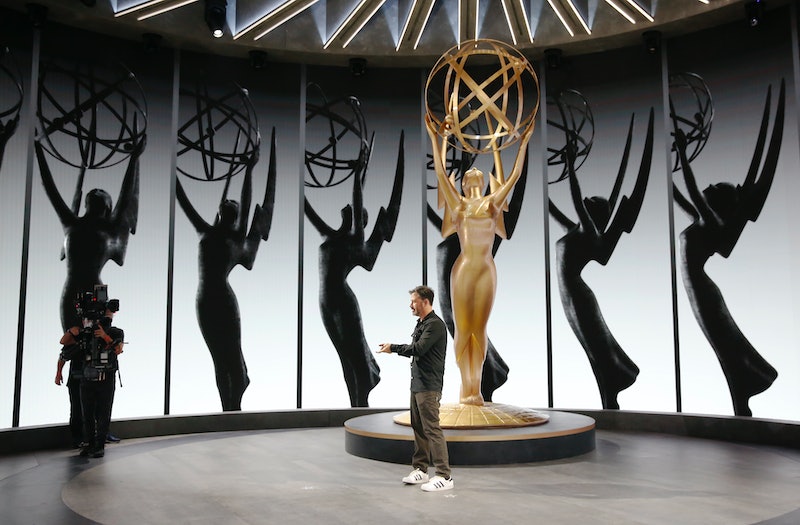 We knew that when Jimmy Kimmel opened the 2020 Emmy Awards with his monologue, there would be no live audience to welcome him onto the Staples Center stage. And yet, somehow, the screen kept cutting to the laughing mugs of the celebrities we’re used to seeing each year — glamorous people in expensive clothes like Allison Janney and Kerry Washington and, confusingly, Jimmy Kimmel?

The footage, of course, was recycled from Emmys past. When the camera finally panned to what the arena really looked like, Kimmel was all alone. “Just like prom night,” he joked. Welcome to the first major awards ceremony in the age of COVID-19 or, as Kimmel dubbed them, the Pandemmys.

Eventually, Kimmel did get some company. Nestled among the audience of cardboard cut-outs producers installed in the seats sat a lonely real live Jason Bateman. It was the beginning of the answer to what might be the night’s biggest question: What can a major awards show look like with no one there to accept the awards? If the opening monologue is any indication, there will be socially distanced celebs and a sense of lightness.

Because while the Emmys are always “frivolous and unnecessary,” as Kimmel pointed out, being able to enjoy the frivolous and unnecessary suddenly seems a profound luxury. “We need fun,” Kimmel told basically no one except those of us watching at home, sitting where we’ve been sitting for the last six months, watching the television that’s kept us informed and entertained. “Our old pal TV,” Kimmel called it with surprising earnestness. He may have dunked on Quibi, but it’s telling that he took time to celebrate small screen legend Norman Lear, whose shows have kept us company for over half a century.

Sure, the salvaged footage of ceremonies past was awkward and maybe went on a little too long, but playing to an empty room is a thankless task for any comic. Can we really blame Kimmel for taking the chance to order up his own standing ovation?

This article was originally published on Sep. 21, 2020