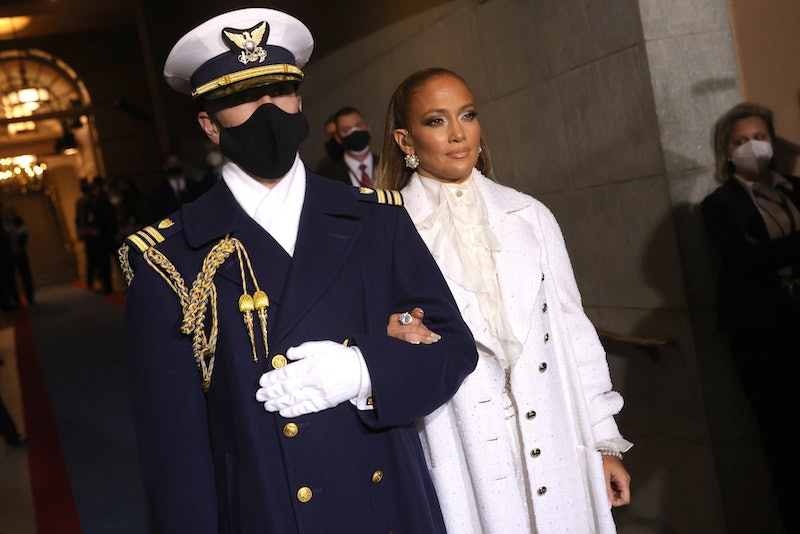 Jennifer Lopez performed a rousing rendition of "America the Beautiful" and "This Land is Your Land" at Joe Biden and Kamala Harris' inauguration on Wednesday, Jan. 20. At the U.S. Capitol, where an insurrection took place just a few weeks prior, Lopez closed out her performance with an inspiring proclamation in Spanish: "Una nacíon bajo Dios con libertad y justicia para todos."

In English, J.Lo's message translated into a phrase that Americans know well: "One nation, under God, indivisible with liberty and justice for all." The singer also made sure to infuse the performance with that signature J.Lo flare, singing "Let's get loud!" between the two medleys. (Petition to formally implement "Let's get loud" into "This Land is Your Land" and "America the Beautiful.") Lopez's mashup came after Lady Gaga kicked off the festivities with a performance of the National Anthem.

The "On the Floor" singer had been chronicling her journey to the U.S. Capitol on social media before her stirring performance. A day before the inauguration, she shared a video with some members of the National Guard stationed in Washington. "What an honor to spend a few moments with these brave men and women," she captioned an Instagram post on Tuesday. "Thank you for your service and sacrifice. I honor you today and everyday." On the morning of the inauguration, J.Lo shared an image from the steps of the Capitol.

While on The Tonight Show earlier this week, J.Lo's fiancé Alex Rodriguez opened up about his partner's pre-inauguration jitters. "It's been such a crazy year for her — so amazing, so many blessings, but to think in a span of 12 months, she's done the Super Bowl, New Year's [Eve] and now the inaugural, it's unbelievable," Rodriguez told host Jimmy Fallon. "She's most nervous about Washington, D.C. because of the responsibility."

J.Lo and Gaga's powerhouse performances were followed by Biden's swearing in and inaugural address. Country singer Garth Brooks performed a rendition of "Amazing Grace" soon after. The trio includes just a few of the A-list musicians slated to participate in Wednesday's celebration. Demi Lovato, John Legend, Justin Timberlake, and Bruce Springsteen are among the artists lined up to perform during the Celebrating America special later tonight at 8:30 p.m. EST, which will be hosted by actor Tom Hanks.