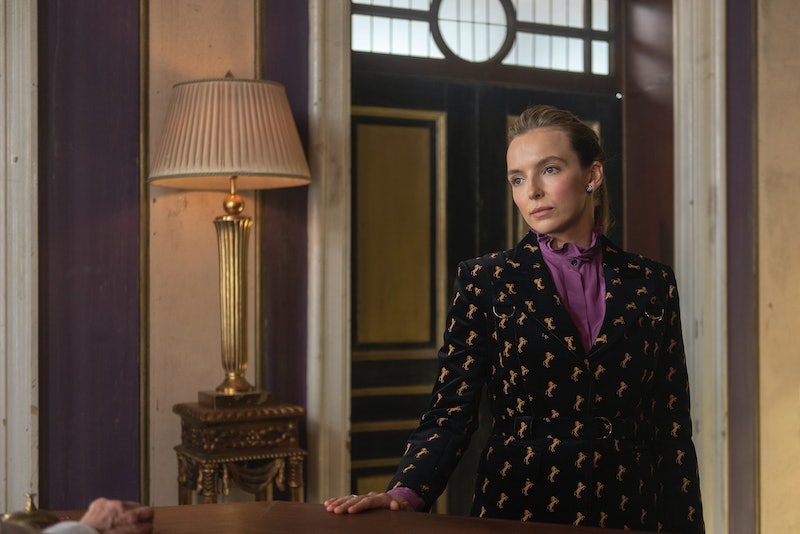 In a recent interview with Harpers Bazaar, actor Jodie Comer opened up about her time on Killing Eve ahead of its final season next year. Speaking to the magazine off the back of winning a Harpers Bazaar Women Of The Year Award, Comer opened up about playing the loveable-but-oh-so-terrifying Villanelle – including how alien it felt to dress in her character’s avant-garde wardrobe.

As Harpers explained, wearing Villanelle’s “lace Burberry maxi-dresses and printed Halpern suits” was a “change of pace” for the actor, who prefers a more casual look. “Villanelle’s style is loud and a little bit mismatched,” the actor said. “She dresses for herself, which I adore,” Comber said, but added that she’s at her happiest when she’s “comfortable.”

“I want to explore fashion but ultimately, I want to feel like myself,” Comer continued. “Villanelle would probably hate me! She has a quote in the show, ‘Comfortable is what you make people with a terminal illness.’”

Though Villanelle’s fashion sense is quite out there for most people, Comer is certainly able to pull them off. And, on the red carpet, she has appeared in a variety of gorgeous suits, mini-dresses, and poofy gowns too – just like the kind Villanelle bought in her season two Paris shopping spree.

But the actor “swears she’s a jeans-and-t-shirt kind of girl,” according to Marie Claire. Comer told the magazine last year that she is “way too lazy for [her] own good,” and definitely doesn’t “have Villanelle’s flair for fashion.”

Comer will be reprising her role as Villanelle in Killing Eve for its final season, which will premiere in 2022 – though a release date hasn’t yet been announced.

There are no plot details yet either, but after the season three finale, viewers are likely hoping for a happy ending between Eve and Villanelle. The final season will be helmed by Sex Education writer Laura Neal, with Comer telling Harpers that Neal has “really pushed the boundaries with Villanelle.”

The actor continued, “One of my only requests with season four was that I wanted Villanelle’s fire reignited, as I felt it had fizzled out a bit. There is a particular moment that’s like nothing we’ve ever done in Killing Eve.”

More like this
Rita Ora Finally Opened Up About Marrying Taika Waititi & Their "Perfect" Wedding
By Sophie McEvoy and Catharina Cheung
Con O'Neill Was Connected With Sarah Lancashire Long Before 'Happy Valley'
By El Hunt
'Bridgerton' S3 Will Show A *Very* Different Side To Kanthony
By Sam Ramsden
Twitter Is Burning As Phoebe Dynevor Reveals Daphne’s 'Bridgerton' Exit
By Sophie McEvoy
Get The Very Best Of Bustle/UK
Sign up for Bustle UK's twice-weekly newsletter, featuring the latest must-watch TV, moving personal stories, and expert advice on the hottest viral buys.