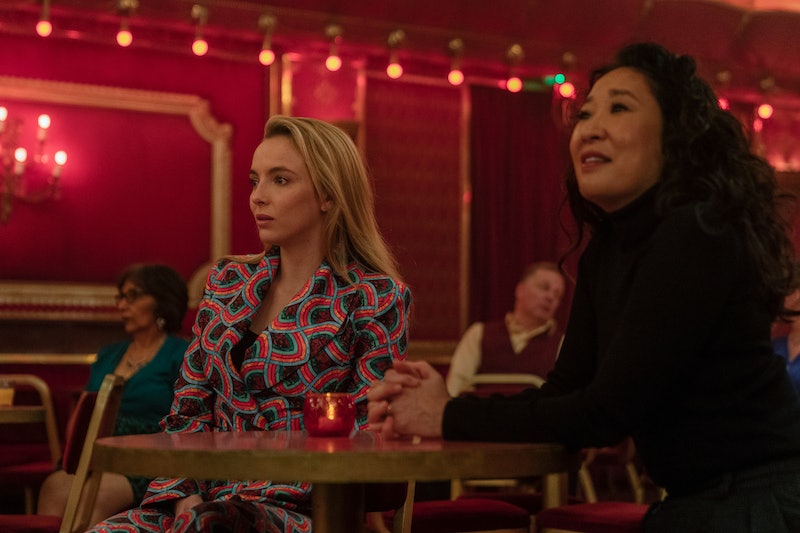 Spoilers ahead for the Season 3 finale of Killing Eve. Season 3 of Killing Eve may be over, but its central question of who killed Kenny is still unanswered. He may have been pushed off the roof by Konstantin or tumbled by accident when Konstantin confronted him. If you want to get philosophical about it, perhaps Carolyn killed Kenny in a long run of dominoes that started falling when she recruited her son into espionage. That the mystery of Kenny’s death isn't resolved is frustrating, but also revealing. The central question here was never the most important one. As it has been with every season so far, the only question of consequence is the will they or won’t they between Villanelle and Eve.

The Season 3 finale of Killing Eve ends with Villanelle and Eve staring at each other from 40 paces on Tower Bridge, as far as they can compel themselves to walk apart before turning back. Have they reached the gravitational limits of their yoked hearts, or is it simply a last look?

Until now, there have been plenty of reasons why Villanelle and Eve couldn’t work as a couple. When we meet Villanelle, she’s a murderous sociopath; her most recognizably human impulse is that she forms an overpowering crush on someone she hardly knows because she has nice hair. That’s not the case anymore. Across this season, Villanelle developed a deeper emotional sensibility and maybe even the beginnings of a conscience. She doesn’t want to kill anymore. In fact, she can’t even bring herself to finish off Dasha. When she finally suggests that she and Eve go their separate ways into the London night, it’s the safest she's ever seemed.

Neither are the would-be lovers divided by work. Villanelle has quit The Twelve, and Eve’s job... well, what is Eve’s job? She started Season 3 as a line cook and finished it as an unpaid sleuth. When she was an MI-6 agent, her mission was to end Villanelle’s murderous spree. With both women effectively retired, another barrier that prevented them being together has dissolved.

The most compelling reason for Eve to avoid Villanelle has always been what that relationship would ultimately cost her. Besides her job, Villanelle posed a threat to Eve’s normal life and Eve’s normal, loving husband. But Niko, of course, was last seen in a hospital in rural Poland, recuperating from injuries incurred at the hands of The Twelve and telling his estranged wife to “piss off.” Eve’s already paid the price she struggled to avoid. If she’s not going to take a chance on Villanelle now, what was the point of her enduring so much ruin?

Eve's stated reason for walking away in the finale’s last moments is that she doesn’t like the side of her that Villanelle brings out. “I think my monster encourages your monster,” Villanelle tells Eve, who responds honestly: “I think I wanted it to.” But Eve's had scant contact with the assassin all season and her MO hasn’t changed at all. Act recklessly first, think later. She leads danger to Niko’s doorstep without any help from Villanelle at all.

It’s what Eve says next to Villanelle — “Help me make it stop” — that it’s hard to understand. She's sacrificed so much already. Villanelle, at least as she behaves with Eve, is practically transformed, so much so that Villanelle doesn't fight Eve's request at all. Instead, she's the one who starts to walk away.

But the decision to walk away is momentary; the decision to stay away, like a couple’s decision to stay together, has to be made again and again. The episode leaves it unresolved, but it’s hard to imagine that two people who can’t endure the breadth of the Thames between them without looking back to check on each other are ready to make the commitment required for a true, lasting goodbye.

More like this
This Pre-'Love Island' Video Of Olivia & Zara Together Changes Everything
By Bustle UK
Season 2 Of 'Yellowjackets' Is Coming Sooner Than You'd Think
By Gretchen Smail and Grace Wehniainen
'Succession' Season 4 Will Be An "Absolute Banger" According To Cousin Greg
By Bustle Staff
'Ted Lasso' Season 3 Might Be Its Last
By Zosha Millman and Grace Wehniainen
Get Even More From Bustle — Sign Up For The Newsletter
From hair trends to relationship advice, our daily newsletter has everything you need to sound like a person who’s on TikTok, even if you aren’t.