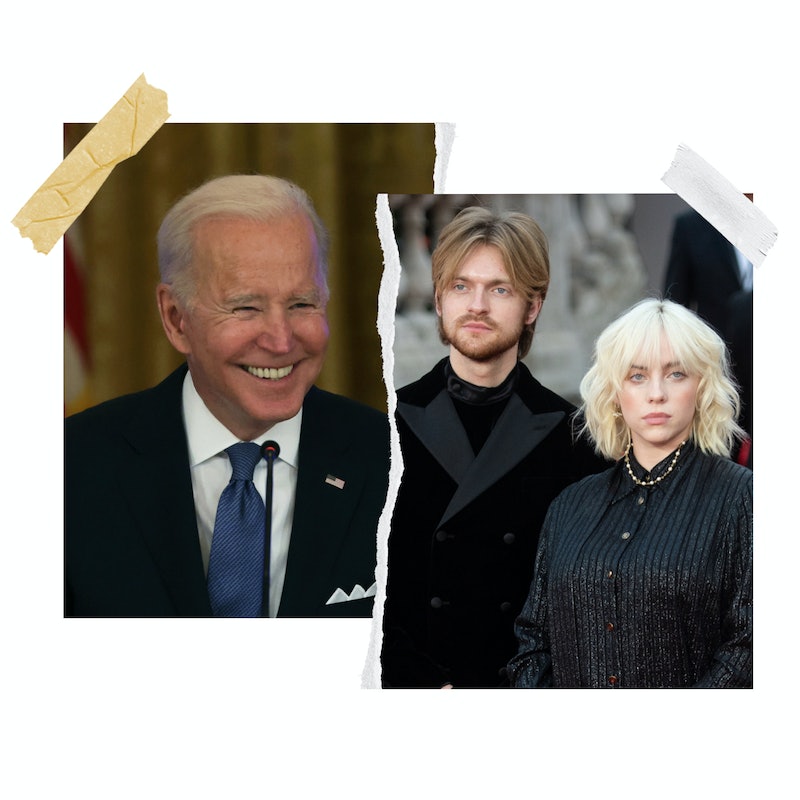 President Joe Biden and Billie Eilish may seem like an unlikely duo, but it turns out they are actually pretty good friends in real life. On Wednesday, Feb. 9, Biden invited the 20-year-old pop star and her music producer-slash-brother Finneas to the White House when he realized they were in town on the Happier Than Ever tour.

“When I heard my friends @billieeilish and @finneas were in town for a show, I knew I had to invite them over to the White House,” the commander-in-chief wrote on Instagram next to a photo of them all masked up. “Great to see you and your family — and I’m glad you got to meet Commander.” Commander is the German shepherd puppy that Biden introduced to the world in December.

A White House official confirmed the siblings’ visit to 1600 Pennsylvania Avenue to People. “Billie Eilish, Finneas and their parents Maggie and Patrick were invited to pay a visit to the White House today to meet President Biden,” they told the magazine. “Billie and Finneas were supporters during Biden’s campaign and the Biden family have been long-time fans of their music.”

The official also revealed that the family’s visit took place before the concert, which was held at the Capital One Arena. The tour kicked off on Feb. 3 in New Orleans and, in addition to Washington, D.C., it’s already made its way through Atlanta, Charlotte, and Pittsburgh. Despite only being five shows in, the “Therefore I Am” singer already made headlines when she paused to help a fan who was struggling to breathe during her concert on Feb. 5.

When Eilish noticed the fan was getting crushed in the crowd, she reportedly stopped the show, requested help from the stage crew, and offered up her inhaler. Before continuing, she took aim at rapper Travis Scott, who came under fire for performing through a deadly crowd surge at the Astroworld Festival in November. Ten people were killed at the event and hundreds more were injured. “I wait for people to be OK before I keep going,” Eilish told the crowd.

The pop star’s trek is scheduled to wrap up in Perth, Australia, in September. And since the COVID-19 pandemic is ongoing, there have unfortunately been some interruptions. Last month, the “Bad Guy” artist announced that her shows in Montreal and Toronto on February 15 and 16 were being postponed out of “an abundance of caution due to local guidelines.”

Fortunately, Eilish has every intention of making it up to her Canadian fans. “Details on rescheduled dates to be announced, and all tickets will be honoured for the new dates,” a statement on her Twitter account read. “Thank you for understanding and please stay safe.” Check out the dates for Billie Eilish’s Happier Than Ever tour here.

More like this
15 Photos Of 'The Last Of Us' Star Pedro Pascal That Cement His Zaddy Status
By Radhika Menon
Who Is Murray Bartlett Dating? 'The Last Of Us' Star Is Extremely Private
By Alyssa Lapid
Who Is Pete Davidson Dating? He & Chase Sui Wonders Got Caught Kissing
By Jake Viswanath
Cruz Beckham Teased New Music With An Adorable Nod To Mom Victoria Beckham
By Stephanie Topacio Long
Get Even More From Bustle — Sign Up For The Newsletter
From hair trends to relationship advice, our daily newsletter has everything you need to sound like a person who’s on TikTok, even if you aren’t.