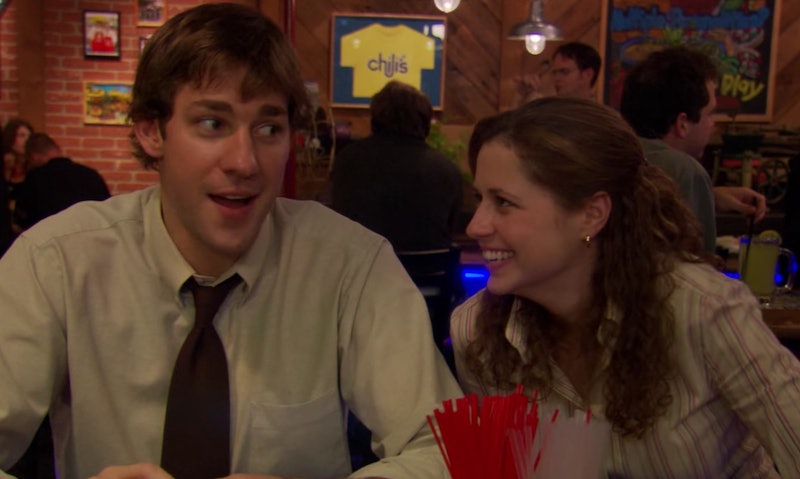 Ask any Office fan, and they'll tell you, "The Dundies" is one of the most iconic episodes in the show's 9-season run. Not only is it when Pam Beesly "feel[s] God in this Chili's tonight," it's also when she and Jim have their very first kiss. It's a drunken, semi-accidental peck, but it's still a huge milestone in their will-they-won't-they relationship. On Tuesday, John Krasinski weighed in on Jim and Pam's first Office kiss during an appearance on his former co-star Brian Baumgartner's podcast, An Oral History of The Office. And, while some of the more romantic fans might consider Jim and Pam's subsequent "Casino Night" makeout their real first kiss, he's actually glad the peck came first.

When he first read the scene, in which Pam kisses Jim, high off her win for the Whitest Sneakers Dundie Award, Krasinski revealed he thought the off-the-cuff moment was so much more rewarding than any grand romantic gesture. “That's real life, whereas a regular television show would have a big, huge kissing,” Krasinski said. “I remember reading that script and being like, man, that is so smart.”

While that pivotal first kiss moment between the ultimate will-they-or-won't-they couple could have very much been grander, Krasinski marveled at the fact that it occurred at the Dundies, of all places. “Like, rather than if it was a big kiss where I took her out back and made some huge overture, you'd be like, ‘oh good, I'm being entertained by this moment. But I don't feel anything. I'm not connected,'" he explained. The actor even admitted that, if that had happened to him IRL, he would have obsessed over that one kiss for months. “I would have stewed on that for months and been like, ‘was that a thing?’ Was she just drunk?” he said.

Jim and Pam remain one of the most beloved couples in television history, in part thanks to how realistically their relationship progressed. Unfortunately, the downside to crafting such an authentic relationship on-screen is that some fans think it's real off-screen. As Jenna Fischer, who also appeared on the episode, explained, fans are so convinced that she and Krasinski are a couple, she sometimes has trouble breaking the news to fans that it was just acting. "I don't know how to explain it because it's like telling kids there's no Santa."

It turns out Jim and Pam were the Santa Claus of The Office, not Michael Scott. Who knew?

More like this
At 28, Debra Jo Rupp Was Living A Much Different '70s Show
By Grace Wehniainen
At 28, Rosie Perez Risked Her Career To Stop Playing Stereotypes
By Gabrielle Bondi
'Abbott Elementary' Fans Probably Missed This 'Parent Trap' Easter Egg
By Sam Ramsden
Raven-Symoné Addressed Fan Pushback To Her Name's Actual Pronunciation
By Stephanie Topacio Long
Get Even More From Bustle — Sign Up For The Newsletter
From hair trends to relationship advice, our daily newsletter has everything you need to sound like a person who’s on TikTok, even if you aren’t.