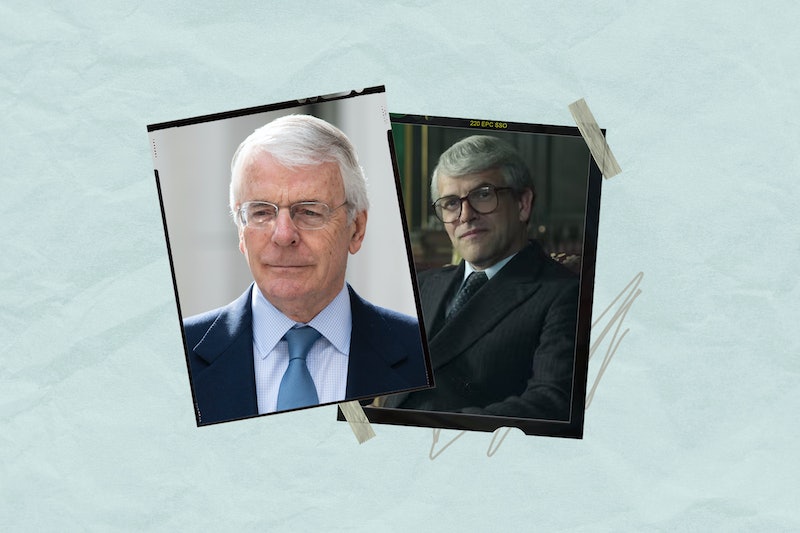 In addition to new actors playing members of the royal family in The Crown Season 5, we’ll also see fresh faces take on the roles of key politicians. Jonny Lee Miller will portray John Major, who was elected the Conservative Prime Minister in 1990. Major was the first PM to be younger than the Queen and provided his support as her ninth government leader during what was a tumultuous decade for Her Majesty.

The former prime minister shared a close relationship with the royal family during his time in Number 10. He was appointed Harry and William’s special guardian following the death of Diana, and was the only politician invited to Prince Harry and Meghan Markle’s wedding in 2018. But what does John Major think about his portrayal in The Crown?

On Oct. 15, a spokesperson for Major issued a statement following rumoured plot lines involving a plan between the former prime minister and King Charles III to make Queen Elizabeth II abdicate the throne. Clarifying “there was never any discussion” about this matter, the spokesperson added, “nor was such an improbable and improper subject ever raised by the then Prince of Wales (or Sir John).” Another plot line includes a “disparaging” conversation about the Queen between Major and wife Dame Norma. On this, the spokesperson said, “that has never been their view, never would be their view, and never will be their view.”

Described as “nothing other than damaging and malicious fiction,” Major’s spokesperson said The Crown was “a barrel-load of nonsense peddled for no other reason than to provide maximum – and entirely false – dramatic impact.” They also confirmed that Major had no involvement with the development of the series and that he’d never “been approached by [Netflix] to fact-check any script material in this or any other series.”

Netflix responded to Major’s comments per The Guardian, writing that The Crown in general “is a fictional dramatisation” and that this particular series imagines “what could have happened behind closed doors during a significant decade for the royal family — one that has already been scrutinised and well-documented by journalists, biographers, and historians.”

More like this
Twitter Is Burning As Phoebe Dynevor Reveals Daphne’s 'Bridgerton' Exit
By Sophie McEvoy
Helena Bonham Carter Doesn't Think 'The Crown' “Should Carry On"
By Sam Ramsden
Turns Out George Clooney Is A Huge Fan Of This Classic British Game Show
By El Hunt
Alan Carr's 'Changing Ends' Is A Witty Sitcom Based On His Own Life
By Darshita Goyal
Get The Very Best Of Bustle/UK
Sign up for Bustle UK's twice-weekly newsletter, featuring the latest must-watch TV, moving personal stories, and expert advice on the hottest viral buys.