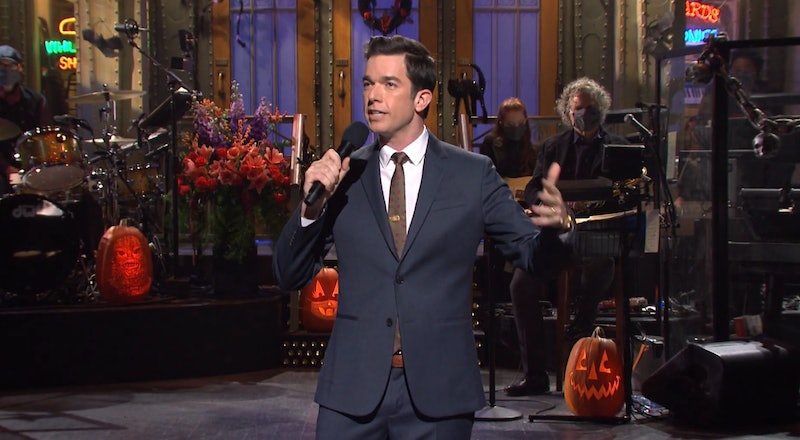 Popular opinion: 2020 has been no laughing matter. Even so, John Mulaney's SNL monologue on Oct. 31 attempted to put a comedic spin on the waking nightmare, taking on everything from New York Governor Andrew Cuomo's daily coronavirus press briefings to the upcoming presidential election. Since the fourth-time host had last fronted the NBC sketch comedy in late February, just prior to production going on hiatus amid the COVID-19 pandemic, he had plenty to catch up on, namely the shows he'd been marathoning in quarantine.

Mulaney's favorite? "An hour-long dramedy called The Daily Press Conferences of Governor Andrew Cuomo." The comedian described the so-called series as the "story of an Italian-American father, who, after being an empty-nester, finds himself quarantining with his two daughters." Hijinks ensue, of course, and he "learns a lot about being a father, and a little bit about being a governor," Mulaney cracked.

And don't test the hypothetical governor when it comes to endangering Grandma's health. Mulaney's characteristically meandering story ended with the political father threatening to break someone's neck and bury them in the Rockaways if they came in close proximity to their elderly relative. The SNL host said his biggest fear, however, is that Cuomo won't know his show is over when the pandemic ends.

Of course, it didn't take long for the subject to turn to the upcoming presidential election. Mulaney noted that he was "supposed to make an announcement" that, on Nov. 3, "there's an elderly man contest." Pending the results, he said, "we might have the same elderly man or we might have a new elderly man." And that's where the monologue took a momentary dark turn.

"But just rest assured, no matter what happens, nothing much will change in the United States," he added. "The rich will continue to prosper while the poor languish. Families will be upended by mental illness and drug addiction..."

Because Mulaney's forte is making audiences laugh, though, he soon transitioned to a funnier angle. After explaining another thing that won't change is that "Jane Lynch will continue to book lots of projects," he started telling hilarious stories about his 94-year-old Nana. And though he encouraged viewers to vote, he admitted his opinion about his grandmother casting her ballot wasn't going to be popular.

"You don't get to vote when you're 94 years old," Mulaney joked. "You don't get to order for the table when you're about to leave the restaurant." Not to worry, though; Nana got her revenge. Mulaney ended with a particularly savage memory of her burning him with, "If I wasn't your grandmother, I wouldn't know who you are," before speeding off in her car.