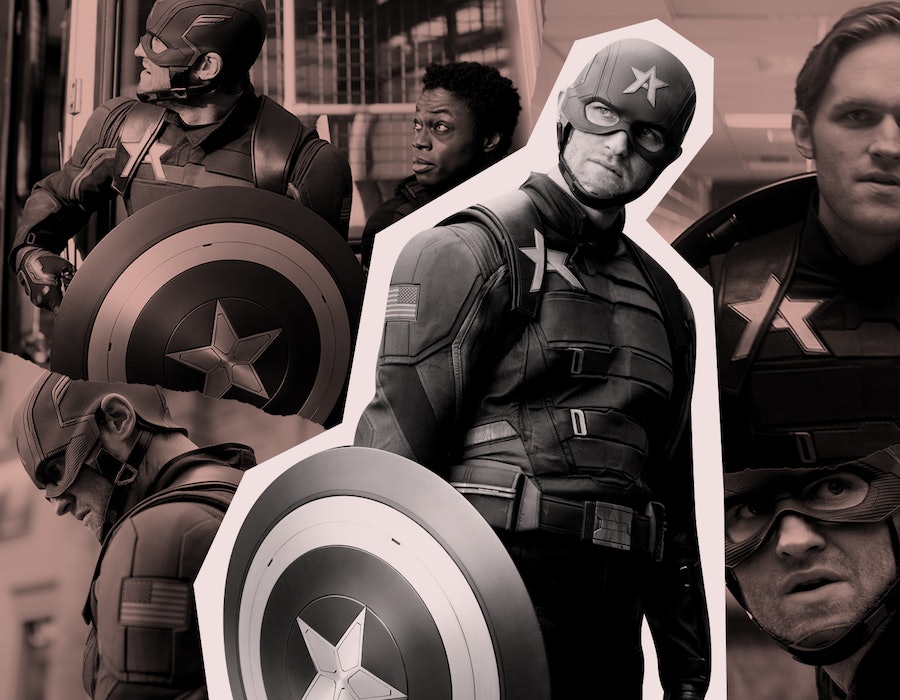 The fourth episode of the Disney+ series The Falcon and the Winter Soldier ended with what might have been the most striking image in an MCU property to date: John Walker as Captain America, having battered a man to death, lifting his iconic stars-and-stripes shield to reveal its lower half covered in blood.

The symbolism might have seemed a little overwrought or heavy handed if it wasn’t so effective. I think I literally held my breath for a full minute afterward while the credits began to roll.

The show itself pulled off a brilliant balancing act when it came to the rise — and the fall — of our new Captain America. Obviously, upon his introduction, we were all going to be biased against this blond, bland, lantern-jawed stranger. On a metaphorical level, he’s a manifestation of Sam’s self-doubts and fear. A plastic patriot. Corporate sellout Ken doll. But more importantly, on an emotional level, he wasn’t Steve Rogers. No matter who they introduced as the new Captain America, he would have been going up against an audience primed to react with some good old-fashioned “you’re not my real dad” energy.

Beneath the cowl, the terrible truth is we’re not Steve Rogers; we’re John Walker.

But then we met a man who seemed to be trying his best, a slightly bro-y but well-meaning West Point all-star with a best friend and a wife and an admirable ability to be charmingly self-effacing during expository television interviews. He’s not Captain America material, I was thinking by Episode 2, but maybe he’s not a bad guy.

I was wrong on both counts.

Steve Rogers represented an America that never actually existed, that doesn’t exist beyond Disneyland’s Main Street. As a character, he was the archetypical hero, whose principals of goodness, of friendship, and bravery, and doing what’s right even if it’s hard, made him worthy enough to bear a literal god’s mythical hammer. I wish this nation was that good, that decent and thoughtful, but any clear-eyed look at the last five years (or last 250 years) will reveal a nation wrought with systemic racism, fear of outsiders, value of wealth over people, and value of the self over the collective good.

Walker is stripped of his Captain America title, but the show itself makes something very clear: It was an issue of public relations, not morality.

Politicians and country singers in speeches and songs can dress our country up in nostalgic Captain America stars and stripes as much as they want, but beneath the cowl, the terrible truth is we’re not Steve Rogers; we’re John Walker.

John Walker did not begin as an evil man. He is someone who was raised in a system that imbued him with his values. (“I lived my life by your mandates! I dedicated my life to your mandates! I only ever did what you asked of me, what you told me to be and trained me to do, and I did it. And I did it well,” he shouts to a military court in Episode 5.)

We as a country do collectively act the way John Walker did. Drone strikes kill civilians. Our military operates on foreign soil. When someone commits a heinous crime, many states believe the appropriate response is capital punishment. To poorly paraphrase a quote from The Dark Knight that barely made sense to begin with, Steve Rogers is the Captain America we want; John Walker is the Captain America we deserve.

Even John Walker’s punishment operates on a plane of wish fulfillment.

Walker is stripped of his Captain America title after his shield-murder becomes an international incident, but the show itself makes something very clear: It was an issue of public relations, not morality. The episode itself was titled “The Whole World Is Watching,” and the scene itself includes multiple shots of civilians holding camera phones. Chillingly, the question is raised: Would Captain America have been punished for illegally murdering a foreign national on foreign soil if it hadn’t been caught on tape?

But shameful as it is to reckon with a version of a Captain America gone mad with power and personal rage, even John Walker’s punishment operates on a plane of wish fulfillment, in which a government official actually held accountable for something that was caught on camera.

Thank god we have this week’s finale to look forward to, in which we’ll get a new Captain America who will might be able to remind us that things can, and should, get better.

More like this
Anne Hathaway Shared A "Thrilling" 'Princess Diaries 3' Update
By Darshita Goyal
'Happy Valley' Recreated This Moment From S1 In Its Penultimate Episode
By Sophie McEvoy
9 Time Catherine Cawood Was An Absolute Badass In Happy Valley
By Sophie McEvoy
This Dark 'Happy Valley' Theory Is Staring You Right In The Face
By Sophie McEvoy
Get Even More From Bustle — Sign Up For The Newsletter
From hair trends to relationship advice, our daily newsletter has everything you need to sound like a person who’s on TikTok, even if you aren’t.