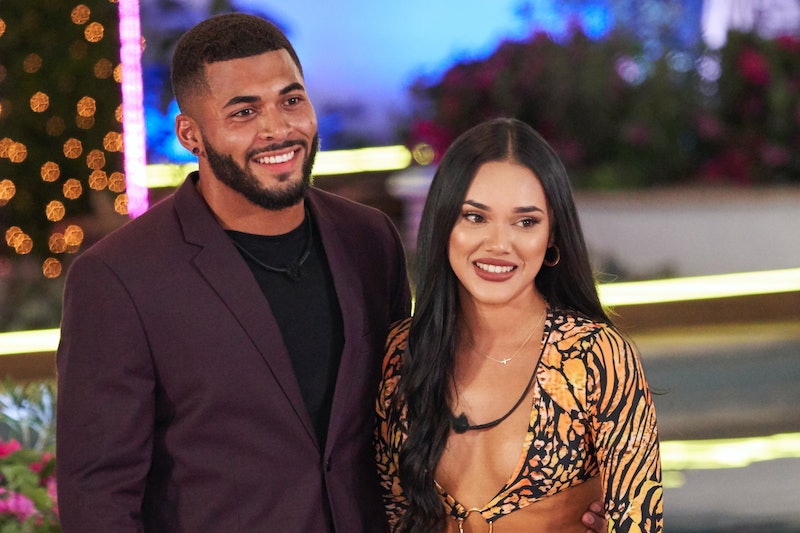 Love Island's location may have changed, but the twists and messy drama remain. Though Season 2 of the US version of the dating show is now being filmed on a Las Vegas hotel rooftop instead of an actual island, the singles still have to pair up, and the couples can still be thrown into chaos by a last-minute contestant. Near the end of the premiere episode of Love Island Season 2, Johnny Middlebrooks appears as the newest addition to the villa, and he immediately swoops in to steal Cely from Tre. Who is this newcomer, and will his initial attraction to Cely turn into something deeper? Here's what we know about Johnny so far.

Who is Johnny on Love Island Season 2?

According to Johnny's Love Island bio, he's a 22-year-old student from Chesapeake, Virginia. He's a track and field star at the University of Mount Olive, where he's also studying business management, per his LinkedIn.

He's close with his family

It seems that Johnny has a strong relationship with at least one of his family members. In an Aug. 17 Instagram post, Johnny's sister Olivia announced that she was taking over his account while he's away filming.

"Hiiiii everyone!!! BIG NEWS. This is Johnnys sister, Olivia, and I’ll be taking over his Instagram account for the next couple weeks," Olivia wrote. "Could not be more excited for him and I know all of you probably feel the same way. Keep updated on this account and turn on post notifications to see what he’s up to throughout the duration of the show and when the time comes to see how you can vote vote vote!"

In his intro video, Johnny also mentions that growing up with a sister made him attuned to her "guy troubles," and "knowing the way I want my sister to be treated" has taught him how he should treat a woman.

Johnny is a hopeless romantic

Johnny dislikes when people assume that just because he's an athlete, he's also a player. He's a romantic, and states in his bio that he went on Love Island to find a serious relationship. (The track record of long lasting relationships that result from reality TV shows isn't great, but it's good to be optimistic!)

"Dating for me has felt like paying rent for a one-room apartment with bad furniture and no electricity (i.e. temporary)," he wrote. "I want to be paying a mortgage on a mansion with a long driveway, a pool in the backyard, and cars in the garage (i.e. permanent)."

He hopes that one of the women on Love Island will recognize his good traits: his "ability to listen, compromise, forgive, understand, and love."

When he's not sprinting up and down the track field, Johnny noted that he loves photography and modeling. You can see this all over Johnny's Instagram, which is filled with gym selfies and candid city adventure shots.

So early into his time in the villa, it's not yet clear. He definitely surprised Tre by choosing Cely, and he admitted in his intro video that he's been "known to steal a girl here and there." It just happens, he says, because "girls love to confide in me... I know how to treat a woman. If you're slipping up, I'm going to swoop in."

This is undoubtedly going to stir up drama, but will it also lead to love? Johnny is confident that women will be won over by what he has to offer, though. "I like to think I'm rare," he said in his video. "You can't just find a Johnny anywhere."

More like this
Love Island’s Latest Winter Season Finally Has A US Release Date
By Grace Wehniainen
'Love Island' Has Added Yet Another Bombshell To The Villa
By Bustle UK
This Pre-'Love Island' Video Of Olivia & Zara Together Changes Everything
By Bustle UK
Every Season Of 'Love Island' Ranked Best To Worst
By Alice Broster, Frances Stewart and Sophie McEvoy
Get Even More From Bustle — Sign Up For The Newsletter
From hair trends to relationship advice, our daily newsletter has everything you need to sound like a person who’s on TikTok, even if you aren’t.