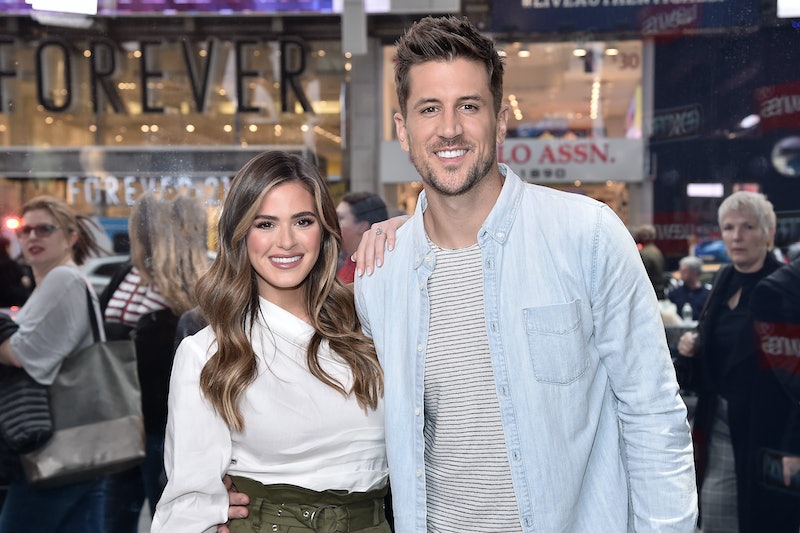 They may have to wait longer than anticipated for their dream wedding, but JoJo Fletcher says she and Jordan Rodgers will get married "no matter what" while sharing plans for the big day with fellow former Bachelorette Rachel Lindsay. JoJo and Jordan — who got engaged on the 2016 season of the reality show — originally planned to tie the knot in June 2020, but were forced to postpone their wedding due to the ongoing coronavirus pandemic.

Now that their new wedding day is finally approaching, JoJo revealed that they couldn't be more excited to walk down the aisle. "I got reminded today that our new wedding day is actually six months away, and that came as a shock to me because I couldn't believe that it's six months away we're getting married," she told Lindsay during an appearance on Extra. "Our new day is May of next year, and who knows what the state of our country and this world will look like, and I'm hoping at that point we are able to celebrate."

While JoJo was being realistic about the possibility that she and Jordan may have to postpone their big wedding once again, she made it clear that they will get married as soon as possible. "I think that Jordan and I have decided, like, if it's not going to work out to have this huge, extravagant wedding that we really have dreamed up, we'll still do it on our own, together," she said. "We've been engaged — it will be five years by our new wedding day. If we have to push it another year — six years, crazy — we will get married no matter what!"

Despite getting engaged over four years ago, JoJo and Jordan weren't in a rush to get married right away because they wanted to make sure that their relationship was solid before they tied the knot. The couple documented their post-show journey on their YouTube series, Engaged with JoJo & Jordan, and the former NFL player re-proposed in August 2019 so that they could share that moment privately.

"3 years ago we got engaged in a way that some, if not all, would say is crazy and totally unconventional. & They were right. It was. But it was also very real," she wrote on Instagram at the time. But as special as their onscreen proposal was, the one Jordan planned meant even more. "The show brought us together and set us up for a truly amazing proposal the first time around, but this time was all YOU. And that means everything and more to me," she added. "I can't wait to marry you!"

Despite her desire to marry Jordan after so many years together, JoJo told Entertainment Tonight in June that they wanted to make sure that they could celebrate with their family as safely as possible. "We would never sacrifice that day to just rush and get it done. So, if it can't happen the way we want it to happen, we'll do it when we can," she said. Jordan echoed those sentiments with a joke: "It's been four years, so what's another year?"

Around the same time, the couple commemorated their original wedding date on Instagram. "Happy 'What would have been Wedding Day' to us!" JoJo wrote alongside a photo of her fiancé kissing her on the cheek. "As you guys know, we have spent the last 11 months planning the wedding of our dreams but given the circumstances of 2020, we had to make the difficult decision to postpone our special day. Even though I don't get to marry you todayyyyy [Jordan], I know it will be all more worth the wait. ⁣⁣2021, we realllyyy can't wait for you."