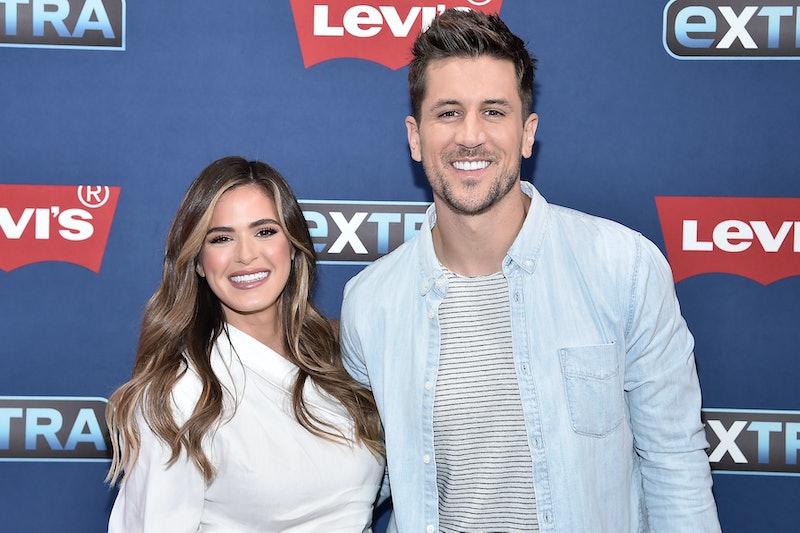 It's been four years sine JoJo Fletcher and Jordan Rodgers got engaged on national television, but they might have to wait a little bit longer to finally tie the knot. While chatting with Chris Harrison during an Instagram Live "Double Date" on March 24, Bachelorette stars JoJo and Jordan said they might postpone their wedding due to concerns about the novel coronavirus. While the couple are keeping most of the details about their big day under wraps, JoJo did reveal that they're hoping to get married "this summer," but they might have to figure out another plan.

Despite all of the events being postponed and canceled in order to prevent the possible spread of COVID-19, JoJo said she wasn't worried about having to push her own wedding until her wedding planner called her earlier that day. "I was like ... 'We're just going to wait until the last minute to see if we need to reschedule,'" the Listen To Your Heart judge recalled, explaining she thought the summer date would leave them in the clear. "And she said to us, 'Totally hear you, but the problem with that is that your venue now is starting to book up through up until 2021.'"

As a result, JoJo and Jordan are considering putting off their big day in order to keep themselves and their loved ones safe. "We had a good conversation today about how to deal with it," she explained. "We would never sacrifice that day to just rush and get it done. So, if it can't happen the way we want it to happen, we'll do it when we can."

"We don't want people to be worried about traveling around it, so if there is that, then we'll look at possibly rescheduling to next year even though that’s not what we want to do," Jordan told Harrison. While they don't want to put it off for an entire year, unfortunately, JoJo explained that they can't wait until fall because of her fiancé's sports commentating career, so the only option might be to wait even longer.

Despite popping the question back in 2016 on the Bachelorette finale, Jordan re-proposed to JoJo in August 2019 with a brand new ring. "The show brought us together and set us up for a truly amazing proposal the first time around, but this time was all YOU. And that means everything and more to me," JoJo wrote to Jordan on Instagram. "I can’t wait to marry you! Thank you for loving me so purely and protecting my heart in a way I always used to pray for."

In an Instagram post of his own, Jordan wrote that while their first engagement was meaningful, as they began to plan their wedding, he realized that he wanted a chance to propose once more. "I always wanted to re-propose, with no cameras, no producers, no drama...just us," he explained, later adding, "And so the greatest adventure in life begins (again)...with the my best friend. Let’s get F’ing married already."

Bachelor Nation may have to wait a while longer to see JoJo and Jordan finally tie the knot, but at least the couple will return to TV soon. JoJo and Jordan are returning to the franchise to judge The Bachelor's newest spinoff, Listen to Your Heart.