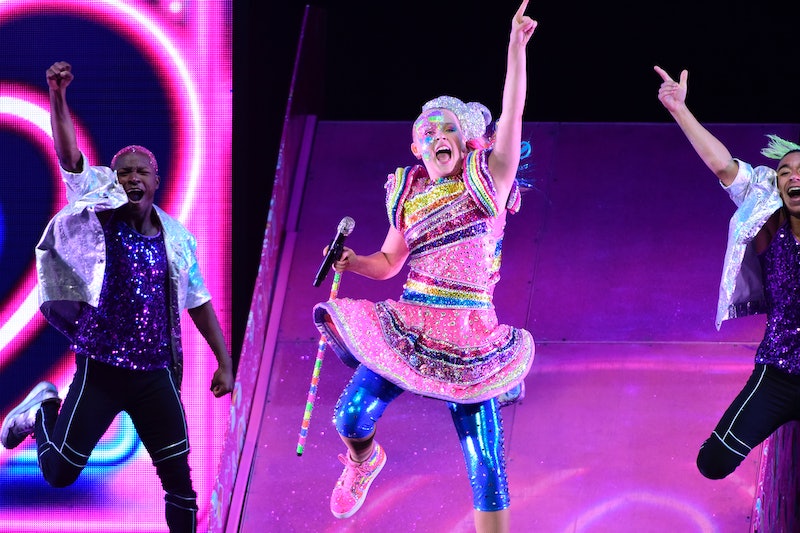 Someday soon your flight across the country might include a layover at JoJo Siwa Airport — that is if tens of thousands of the 17-year-old star’s superfans have their way. A petition featured on Change.org is aiming to switch one historic name for another on the front of one of the biggest air hubs serving Washington, D.C. Yes, the goal is to swap former president Ronald Reagan’s name for the name of one of the world’s biggest teen stars at Ronald Reagan Washington National Airport.

The petition, which now has more than 24,000 signatures, launched three weeks ago. Petition creator Dylan Long kept his reasoning short and simple: “Why on earth is there an airport named after this war criminal?” In less than a month, his mission is within striking distance of its 25,000-signature goal. Should the petition hit that mark, it will become one of the top-signed options on the site, according to Change.org.

Hundreds of signees have left comments giving insight into why they lent their name to the petition, and most of them are having fun with their messages. Nicholas Hannan commented, “Ronald Regan [sic] rigged the economy for the rich and screwed over everyone else. JoJo Siwa was on Dance Mom’s [sic] and I like her better,” closing out his two cents with, “Plus she’s gay.” Encouraged by her girlfriend, Siwa came out in January and later clarified, “Technically I would say that I am pansexual” in April. Roric McCorristin was honest with their lack of info, claiming “I don’t know who JoJo Siwa is, but I know she didn’t fire 11,000 striking air traffic controllers.”

While she may not be a politician, Siwa has already made a name for herself as a star on YouTube, with her albums and singles, and via a number of Nickelodeon TV shows and Lifetime’s Dance Moms. Already beloved by millions of fans the world over, the teen sensation grabbed headlines and earned raucous applause when she publicly came out early in 2021.

Additionally, on May 12, Siwa announced that she and her mother/manager (or “momager”) will co-star in the upcoming reality program The Siwa Dance Pop Revolution, which is headed to NBC’s Peacock streaming platform. The show sees the two looking for the next big music group, with Siwa herself serving as a choreographer and mentor.

The choice to substitute Siwa for Reagan surely wasn’t a coincidence, as the two have wildly different track records when it comes to the LGBTQ community. While the teen star is seen as a brave role model for many young people, the late former president largely ignored the emerging AIDS crisis during his time in office, allowing tens of thousands of Americans, many of whom identified as LGBTQ, to die without so much as acknowledging their suffering or attempting to help.