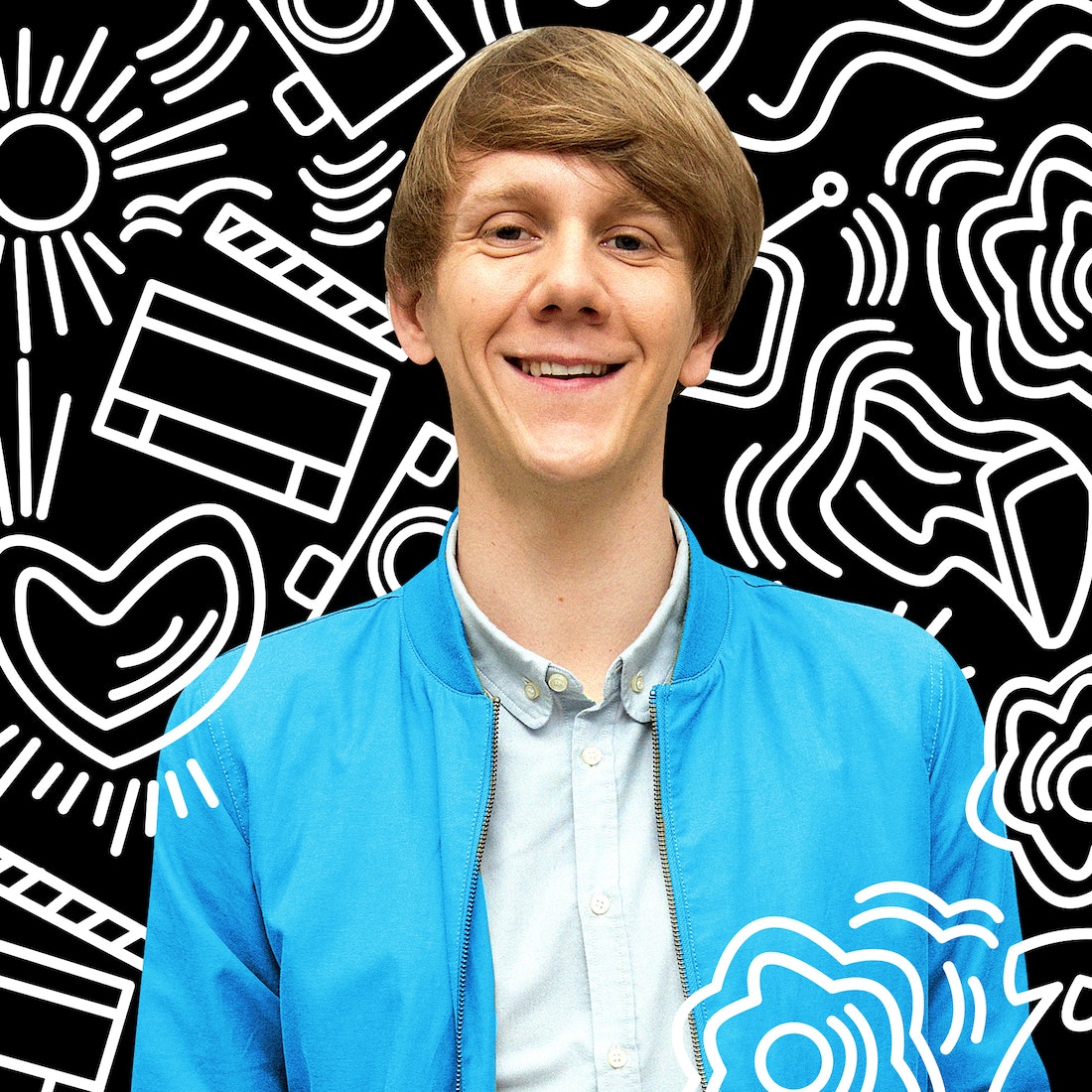 “I have to warn you, I’m so terrible at these Pride questions. I’ve never done one of these interviews and not finished with the journalist a bit mad at me,” comedian Josh Thomas tells Bustle while sitting on a house boat in Mildura, Australia, just one day after the Season 2 finale of his series Everything’s Gonna Be Okay. “I’m just really bad at talking about being gay for some reason, which is weird because it’s all I’ve done for the last 15 years, and it’s Pride Month! Everyone wants you to be so proud or whatever, but I’m just gay. I don’t think about it that much.”

His witty, heartfelt series — which 34-year-old Thomas created, wrote, produced, and starred in — tells the story of a gay entomologist named Nicholas, who becomes the guardian of his two half-sisters after the death of his father, the eldest of which is on the autism spectrum. Since its release in 2020, the show has been lauded for its realistic, thoughtful approach to unique family dynamics, neurodiverse characters, and sexuality.

On this June day, he’s found himself in a state of lockdown limbo: After renting the house boat, the region of Victoria he was staying in was put under lockdown due to the coronavirus pandemic, and then, his home city of Melbourne imposed its own restrictions. Thomas has been making the best out of limbo by fishing for carp, making trips to the grocery store, and reflecting on Everything’s Gonna Be Okay. Thomas admits that the decision to create a TV show starring neurodiverse, queer characters comes from a desire to make content that he “would want to watch” on screen.

“It is thrilling that [the show] gets played in all kinds of places where gay people wouldn’t otherwise get the chance to hang out with other gay people,” he says. “And not just in rural areas, but all over the world; it plays in countries where it’s illegal to be gay. It gets pirated in countries where it’s illegal to have gay content on TV. So that’s nice.”

The show also parallels Thomas’ own life. In April, he posted a note on Instagram to share that he is an autistic person. “I’ve decided to share this with everyone because the range of autistic people and characters we see in the media is very slim, when the autism spectrum is huge and varied,” he wrote. “So here I am: another version of an autistic person for people to see.”

For Thomas, coming out as autistic felt “similar” to his experience coming out as gay. “There’s the same, familiar feeling of this burden on the person of coming out to explain it to the other people, which is annoying,” he reveals. “You tell people and they have all these questions and then you have to do all of this work for them to help them understand. That felt really familiar.” It also came with a subset of worries, especially when it came to whether or not he would be accepted. “I just got this feeling of being the new kid at school. Or that you’re not gay enough, or this time I felt like maybe I wasn’t autistic enough,” he says. “But otherwise, both times coming out was great. You say it and then everyone’s nice and then you get to live a more authentic life. It’s way better.”

His personal advice for overcoming those doubts? “Oh, I just thought about it and then I ignored it,” he cheekily explains. “All the fears I had before I came out, they were overshadowed by the fact that I needed to tell people I was gay otherwise no boys would know that I was available. And that was more important than my fears of how it would affect my career or my homophobic aunties. You just accept that those things are scary and then set them aside. It’s good to be yourself.”

16-year-old me was so stupid. At the time I was dating girls. I dated a bunch of girls before I came out and I liked it. As far as being gay, [the 16-year-old me] was working it out, it’s fine. I wish I was nicer in high school; I was bullied sometimes, and I would bully people as a reaction. It took me the whole of high school to work out that it’s so much better to be sweet to people or just ignore them. There’s no reason to try to pull someone down even if they’re being a monster to you. It’s better to just move on and find something positive to do with your time.

As far as being gay goes, I do regret not having sex with a boy when I was 16. I feel like that would’ve been really fun. If I was a 16-year-old now, I’d say, “Go have sex with a boy and be fun.” I didn’t have sex with a boy until I was 19. I was having sex with girls and that was fun too. “Have more fun. Be sweet to people. And suck more d*ck while you’re young.” That’s just the advice I’d give myself, not necessarily the advice I'm giving 16-year-old readers! They should be doing whatever they think is responsible and good.

A lot of people wish that they could’ve had a whirlwind romance when they were young. Is that what you’re describing?

Yes! The intensity of teenage romance! I always experienced that with girls and it would’ve been fun to do with a boy, but you can never do it. Maybe when my boyfriend comes home I’ll just be very dramatic.

When I look to the future, I always want to be doing what I’m doing right now. When I was 25, I was going to all of these parties, staying up until 6 a.m., doing these drugs, and thought, “I don’t want to ever feel like I’m too old to do this.” But now I’m 34 — I don’t need to see the sunrise. Every year I come home from a party half an hour earlier. I think maybe in 16 years I’ll be on a weird farm with really dirty hands — turn my back on show business and live off the land. It’s not what I want to do, it just feels like the energy I’m spiraling toward. I feel like I’ll cut off all of my relationships and just be that guy that lives in the woods and just sort of chops wood and eats roadkill.

What is your proudest moment as a member of the LGBTQ+ community?

Once I took home seven boys from the same party. It was like this big, gay party that was right next to my house. There were three couples and they had all kind of hooked up, so we were like, “Hey, we’ve got ourselves a squad let’s go.” And then I said, “My house is next door.” So that I guess is one of them. Getting to tell a wide range of queer stories that connect with people in different countries who wouldn’t otherwise get to hang out with gay people is another ... mostly the seven guys thing.

I lived in Los Angeles and the Los Angeles LGBT Center have done a lot of good stuff for people. They gave me a PEP once; they were really nice about that. Appreciated that.

I don’t really care about famous people. I look to my friends. [My publicist] Courtenay just messaged me, she’s a lesbian, and she’s got three kids that she raises — I don’t know how she does that. My friend Simon, he’s fun. My friends that go to brunch and get drunk with me inspire me.

I’m on this boat, aren’t I? We got here a week after Mildura Pride, so I don’t know what happened, but I missed it. My Pride Month is me trying to catch carp, doing two more interviews, and then I’m out of tinned corn so I’ll go up to the grocery store. I guess people in America are celebrating Pride Month for real and going to real parties now that they’re vaccinated. I’m not going to be able to do that. It’s going to be me and the carp.