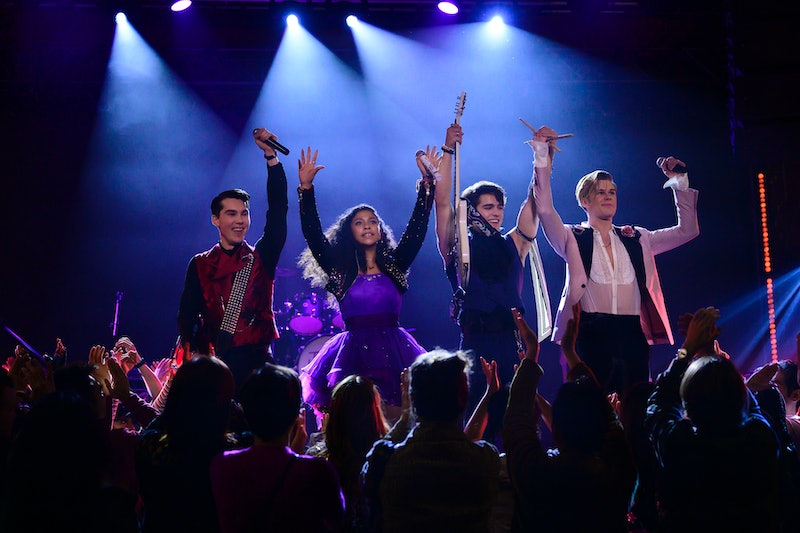 Spoilers ahead for the Julie and the Phantoms Season 1 finale. Julie was convinced that she would lose her ghostly band mates in one way or another on Julie and the Phantoms, but the Season 1 ending gave her an entirely different outcome. After Reggie, Luke, and Alex were marked by the evil ghost Caleb Covington, they had to join his band or be blasted into nothingness by his powerful electrical jolts. Or, they could figure out why they became ghosts in the first place and try to solve that and cross over to the other side. Both scenarios involved breaking up the Julie and the Phantoms band.

In the end, the boys decided to cross over. They thought that since they died right before performing at the Orpheum, playing that show must be their unfinished business. So, helped by Willie, they secured an opening night gig at the theater and played their hearts out. But after the show, they didn't cross over. They just pretended to so that Julie would feel better. In reality, they mustered their strength to teleport home to her garage and laid on the ground, waiting for Caleb to banish them into nothingness for ignoring his calls. That's when Julie found them and everything changed. Let's break it down.

Why Didn't Reggie, Luke, and Alex Cross Over?

When Julie finds the boys dying slowly in her garage, she begs them to join Caleb's band so they can survive. But Luke tells her that music isn't worth making without her. She starts to cry and hugs him and... then he starts to glow? Julie can also feel him, even though previously they couldn't touch because he's a ghost. He says he feels stronger, and Julie encourages Reggie and Alex to join the hug so they can be healed too. The group hug makes them all glow and peels Caleb's evil ghost mark off of them. Is it Julie's tears and love that saved them? Could be. After all, they seem to be connected through her mother, who died at the start of the series. Maybe her mom sent the band to Julie and helped heal them through her.

If Julie and the Phantoms returns for a second season, executive producer Kenny Ortega promises to clear up what happened. "That gets answered very early on in the next season, so I'll get socked if I spoiled that," he told Digital Spy. "It was meant to leave you in some suspense and hopefully some intrigue – hopeful that something magical is occurring, and that it's not the end for these three characters."

It's possible they did actually cross over — just to the living world instead. That could be why Julie can feel them now.

What Happened To Nick?

Caleb isn't happy that the band rejected his offer, so he's going to new lengths to get close to Julie and her phantoms. At the end of the season, he possesses Nick, who is hopelessly in love with Julie. She doesn't know that Caleb has infiltrated her friend, so Julie will likely let Nick get dangerously close to her and her bandmates.

The big question here, though, is what happened to the real Nick when his body was possessed? Because this is a show aimed at a younger audience, it seems unlikely that Caleb killed him. But whenever Caleb chooses to leave Nick's body, Nick may have some side effects from playing host to an evil ghost.

What Does Caleb Want?

Caleb used his powers to allow his ghost band to be seen by humans — but only at his nightclub. Reggie, Alex, and Luke can be seen whenever they perform with Julie, and they don't need Caleb's help to do it. Caleb wants to harness that power for his own evildoing. And since he couldn't convince the boys to join his band, it seems like he's now going to try to take them down from the inside, posing as one of Julie's friends.

What's Billy Going To Do?

Billy was the only surviving member of the Sunset Curve band, and he stole all of their music and passed it off as his own after their deaths. At the end of the season, he saw the viral video of Julie performing with his dead bandmates, and he seemed totally shook. But when he went to their Orpheum appearance, he didn't do anything. He just seemed taken aback. It seems doubtful that he'll be an antagonist in Season 2. If anything, he might actually try to apologize for throwing his bandmates under the bus. But they never got their revenge and they might still want it, according to what executive producers David Hoge and Dan Cross told TV Line. "If we are lucky enough to get a second season, Bobby, aka Trevor, has some skeletons he needs to deal with – and some ticked off ghosts," they teased.

However, if Bobby's daughter Carrie discovers the truth, she'll almost certainly use it to try to take her arch-nemesis Julie down.

Julie and the Phantoms left several cliffhangers heading into a potential second season, which makes its odds of a renewal a little better. Everyone is going to be talking and theorizing about these big moments, and that buzz could translate into Netflix granting the show more episodes. Fans need answers!