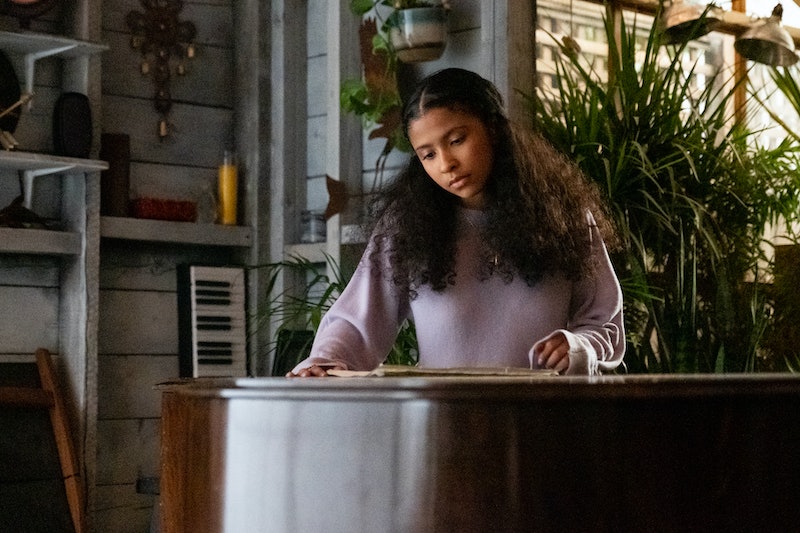 Spoilers ahead for Julie and the Phantoms Season 1. It takes Julie a long time to realize that the three ghosts who show up in her garage on Julie and the Phantoms. might be connected to her mom, but it's pretty obvious from the very beginning. There was almost no other reason to introduce Rose if she wasn't Julie's mom.

Alex, Reggie, and Luke met Rose at the Orpheum the night that they died in 1995. Then, they returned 25 years later to help Julie get her love for music back after her own mother (presumably Rose!) died. One day out of the blue, the three show up in Julie's garage — which is where they used to practice. As Julie grows closer to them, she rediscovers her love for singing and songwriting — a gift she used to share with her mom. Late in the series, Julie discovers a band T-shirt for Sunset Curve in her mother's things. She begins to suspect that she and the boys were possibly connected in the '90s, and that her mom may have sent Alex, Reggie, and Luke to Julie to help her. But her mother may be even more connected to Sunset Curve than Julie knows.

In the first episode, which takes place when all the boys are still alive in 1995, the band is rehearsing at the Orpheum. Afterward, Bobby hits on Rose, a young woman working in the club. He tells his bandmates to go get hot dogs without him while he talks to her. Those hot dogs are what ultimately kill Alex, Reggie, and Luke, because they get food poising.

In the present timeline, Bobby has aged normally and continued his music goals. He changed his name to Trevor Wilson and used the songs written by Sunset Curve to jumpstart his own career (without crediting his dead bandmates). Julie tells the ghosts that she grew up listening to Bobby's music with her mom. So here's my theory: Julie's mom was Rose. The band gave Rose a Sunset Curve T-shirt in 1995, and that could be the same one that Julie finds in her mother's things years later. Rose also mentions that she's "been in a couple of bands" herself. We know that Julie's mom had musical talent and wrote her own songs, so she has that in common with Rose. Additionally, if Rose hit things off with Bobby that night, she might have gone on to date him. Maybe that's why she used to play his songs for Julie, because they were close. It's worth noting that we never learn Julie's mom's name, so it could very well be Rose. She and Julie certainly look alike.

It's also super weird that Julie's family just happens to own the garage where Sunset Curve used to play. If Bobby continued using that space to practice in after his friends died, Rose (aka Julie's mom) would have known about it. Maybe she eventually bought the place because it was special to her. Maybe Bobby gifted it to her. Either way, there are too many coincidences that point to Julie's mom being Rose. And Julie should piece it together soon enough.