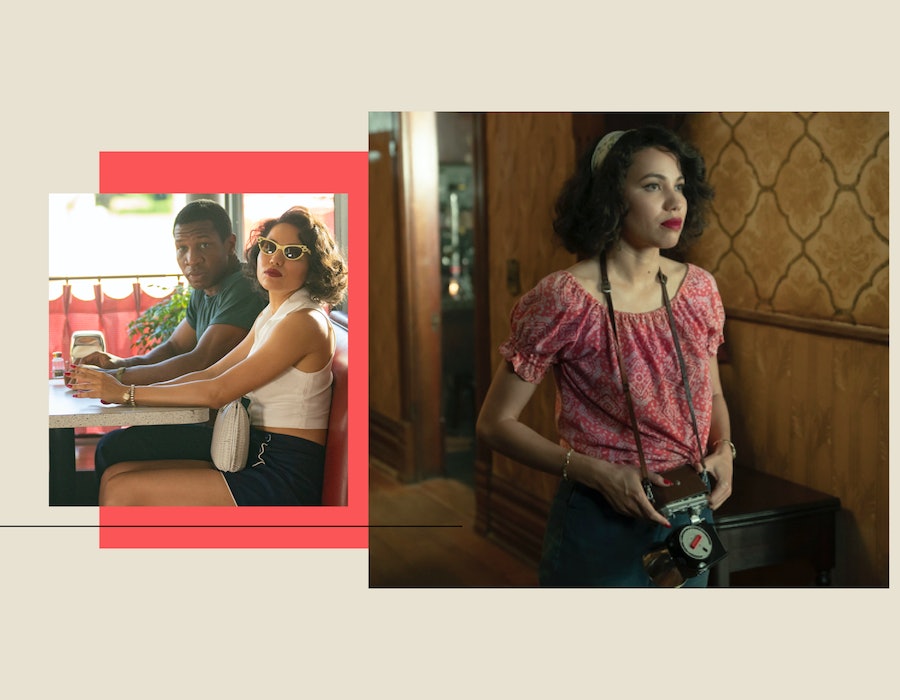 Jurnee Smollett feels a kinship with her Lovecraft Country character Leti Lewis so strong, she likens it to a sort of "blood memory" passed down through generations. "She's so familiar to me," Smollett says. "She is my grandmother, and she is my mother."

Though Smollett never met her grandmother, she grew up hearing stories about her: a beauty queen who became the first Black winner of Texas' Miss Galveston pageant, only to end up cleaning the houses of white folks to support her four kids as a single mom. But even though her white clients "mistreated her, neglected her, abused her, and underpaid her," Smollett's grandmother would still go to work every day with pristine makeup, done-up hair, and an ironed dress. "She wouldn't let them rob her of her dignity," Smollett says. "Her spirit was indomitable, and that was her rebellion: 'I let go of the things I can't control and I will control that which I can.'"

It's this same resolve that courses through Leti, a Black woman determined to live boldly even within the confines of a systemically racist and sexist country. A freewheeling photographer in Jim Crow-era America, she's spent her life blowing in and out of town chasing artistic ventures. But after reconnecting with her old friend Atticus "Tic" Freeman (Jonathan Majors) and surviving the terrors of racist police, a creepy cult, and literal blood-thirsty monsters on a road trip to find his missing father, Leti finds herself back in Chicago, wanting to create a more permanent space for herself in a world so hellbent on trying to erase her.

Episode 3 of the HBO series opens with Leti sitting numbly at George's funeral, her own death — reversed by Samuel Braithwaite's magic — weighing heavy on her mind. As she stares at a woman seemingly possessed by the Holy Spirit during the mass, she "yearns to feel that alive, yearns to feel that free," Smollett explains. She purchases a large mansion in an all-white neighborhood thinking it will give her that opportunity, but instead she's besieged by terrors of every variety. When she moves in, her white neighbors tie bricks to car horns. When she throws a party, they put a flaming cross on her lawn. And when she discovers the previous owner experimented on and murdered eight Black people in her basement, it's his ghost that attempts to kill her, too.

Being able to explore these real and supernatural horrors simultaneously is what attracted Smollett to Lovecraft Country. She'd ruled out the horror genre for a long time because she rarely saw projects that examine what horror means for someone who isn't a straight, cisgender white man. "There were so many things I just didn't want to do, that I was bored with, honestly," Smollett says. Leti represented something new and invigorating: a chance to grapple with the specific ways that life can be horrifying for a Black woman.

Smollett has similarly avoided roles that portray Black women as one-dimensional, which is why she says she doesn't have a resume that's "50 pages long." It's been hard for her to find characters like Leti, who is courageous without falling into the stereotypical Strong Black Woman trope — who is allowed to exist as a contradictory and fully realized human being. Though Leti is buoyant, she's also flawed and selfish; she's a wanderer, and yet she's constantly looking for a home where she can belong; and while she picks up a camera "because she just so wants to see her people and to be seen," she's constantly fighting a "nagging feeling of erasure." She also subverts the way Black women are often over-sexualized: after a spontaneous bathroom quickie with Tic, she eventually admits that she was a virgin, and she's left feeling a little embarrassed about being so impulsive.

"It does a disservice to us as Black women to portray our strengths without also allowing space for us to be vulnerable, and to be weak, and to be flawed, and to do questionable things," Smollett says. This is mirrored by the show at large, which explores the experience of being Black in America in all of its paradoxical trauma and joy. Leti dances at a house party, laughs with friends, and gets intimate with Tic in between moments of ruthless racism and police brutality. But while scenes of happiness often turn to ones of pain, that's the "truth of how life actually is," Smollett says. "People listen to music in their car and then something out of nowhere happens. You're cracking a joke and then a cop pulls up."

That means Lovecraft Country showcases "our joy, our house parties, our block parties, our pursuit of love, sex, and humor" alongside the frustration, heartbreak, and inhumanity of living in an unequal society. It's a multifaceted approach that illustrates life is just as messy and complicated as Leti is, and as Smollett says, "You cannot fully understand the tragedy if you don't experience the joy."