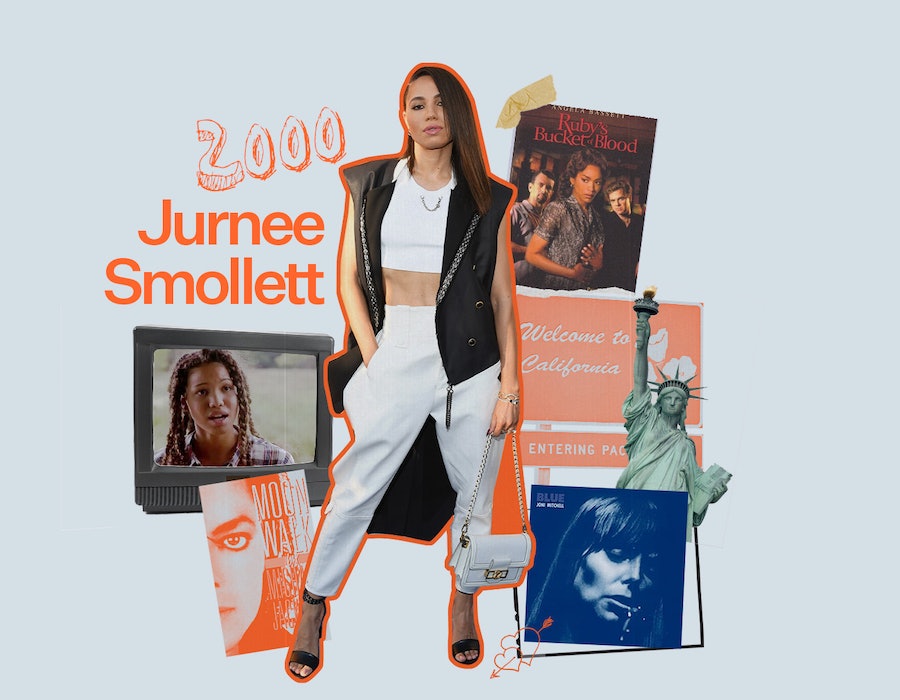 In 2000, a 14-year-old Jurnee Smollett was already a seasoned professional. Growing up in a showbiz family meant she’d started acting early, and already had a decade’s worth of roles under her belt in sitcoms like Full House and films like Eve’s Bayou. Now, like many tween stars before her, it was time to branch out to music — so she signed a record deal with Capitol Records.

“My mom had this idea where she wanted my album to be produced by only female producers, and so I met with Missy Elliott, I met with Lauryn Hill, and had all these plans to work with them, and it never happened,” Smollett tells Bustle of her lost music career. She only ever recorded one song — a single written by Diane Warren — but in the end, Smollett says she’s glad her career stalled before it could take off, even if she doesn’t quite remember how it all went down. All she remembers is that her mom, ever in her corner, asked that she be released from her contract after the executive that signed her left the company — they didn’t trust anyone else to stay true to Smollett’s vision. “They wanted me to do the pop, Britney Spears type of stuff,” she says. “I love that music. I danced to it all the time, but it just wasn’t me.”

So Smollett stuck to acting — a career she’s maintained ever since, appearing in the likes of Birds of Prey, which earned her character, Black Canary, an upcoming spinoff; HBO’s Emmy-winning, genre-bending Lovecraft Country; and, most recently, Netflix’s thriller Lou. But even as she found continued success in Hollywood, at 14, Smollett’s life off-screen was far from glamorous. “I was struggling with so much,” the 36-year-old actor says. Her acne didn’t help: Smollett remembers “random dermatologists walking up to me and being like, ‘Oh, honey. I can help you with this.’” She tried everything, from lemons to olive oil, but she couldn’t get her skin to calm down. When it came to style, she had more control over her image, but looking back, Smollett wasn’t quite the fashionista she thought she was. “When I look at pictures, I'm like, ‘Oh, Jurnee. Oh, oh, oh. You were massively failing at this.’”

Smollett was homeschooled, and her family was her whole world. There was her mom, who urged her and her five siblings to get involved in social justice work and offered “very, very advanced parenting.” (Sex Ed was particularly on point in the Smollett household: The actor recalls her mother talking about sex all the time, which “took the mystery out of it... I think she gave us a lot of information, so we didn't find things out from other kids or other peers trying to try things on you.”) There was her Chow Chow, Judy — named after Judy Garland — and the family’s “several” cats. And there were the aforementioned five siblings, who did their part to pick her up; she remembers her brother Jojo Smollett trying to convince her that she was beautiful, that no one noticed her pimples. Just like her mom, they were always in her corner.

Below, Smollett reflects on living through the 2000 election, the books she kept in her purse, and the song she listened to on repeat.

How did you feel about acting at 14? Were you ever like, “I wish I was working less,” or did you just want your hands in everything?

I think I've always loved what I did, so I definitely wanted to be working. The film that I did [that year], Ruby's Bucket of Blood, it was a small film for Showtime. Working with Angela Bassett, I learned so much, and I remember Courtney B. Vance being on the set. That was my first time meeting him. It was wild that I had to wait 18-plus years before being able to work with him personally on Lovecraft Country. He played Uncle George.

But I remember that script. That was probably the first project my mom just completely trusted me when I said I wanted to do it. She didn't even read the script for it. Whoopi Goldberg was the producer on it, and so I met Whoopi Goldberg on set, and she gave me all this amazing advice about work and studying films. She gave me a trick that I actually still do. She told me to write down, keep a list of the films that I've seen, and take notes on them. I actually still do that.

What was it like being in an early stage of your career and working with so many legends?

Look, Malcolm X and What's Love Got To Do With It, they were some of my favorite films growing up. Angela Bassett's career was definitely an inspiration to me, but I wouldn't classify my experience working with her or these legends in general as intimidation. It was more so, for me, I had this real level of curiosity about them. I just wanted to be in the same space and see how the magic was made.

Then also, there was a really beautiful exchange, because by being amongst the greats, when they give you that stamp of approval of like, “Oh yeah, that was solid,” it gives you a level of confidence. And they'll also be truthful when it's not solid. You learn from that just as much.

You were already working for a social justice organization at 14. What did that work look like at this time?

I was working with this organization called Artists for New South Africa. We were doing different fundraisers during that time, actually. I became a board member of that organization once I turned 18, but I was technically their youngest volunteer member. This was 2000? Oh my gosh. That's when the election was stolen.

We were doing a lot of voter rights and voter protection and registering people to vote, and even though I couldn't vote, I was still going around trying to register people, being like, “Look, I can't vote, I need you to vote for me,” type of thing.

I remember actually wrapping Ruby's Bucket of Blood and then watching that election go down. I remember watching the results come in, and my oldest brother, Jojo, just being glued to the TV — all of us were, but him specifically. And just being utterly dumbfounded and feeling like, "Whoa, the Supreme Court definitely stole this election from Al Gore, and Al Gore should have won." It was one of my earliest impressions of the Supreme Court and just how unjust it can be — as we are seeing in 2022.... Honestly, that was probably the first election in my lifetime in which I felt like, “Wait, the system is f*cking broken.”

I feel like something that makes you such a compelling actor is how you're able to channel this really glorious, righteous anger about things that are messed up in the world. People who as adults wouldn't say they're angry people, at 14 were angry or angsty people. What was your emotional register like then?

Oh, I was struggling. I was struggling with acne and a lot of hormonal issues with my body changing and just dealing with puberty and all the body image issues that young adolescents deal with. Things change, and you're like, "This grows faster and it's not what I thought it was." It's all those things that were happening to me.

I had a real connection to certain musical artists at the time. I would listen to the Beatles' “Real Love” on repeat at night and go to sleep to it. I was heavily into the Joni Mitchell Blue album and would reread Michael Jackson's Moonwalker autobiography dozens of times. This is the strange person that I was. I remember there were two books — it was a poetry book by Tupac and Michael Jackson's autobiography — that I would literally keep in my purse.

Also, my parents had kind of taught me how to take care of the bills and write, so I was constantly on the phone with bill collectors because we weren't doing the greatest financially. It was a lot.

Were you finding a community of people your age who could understand what you were going through?

No, not at all. I was taking martial arts classes and trying to get my anger out, in that sense. I was actually excelling in the TaeKwonDo. She was kicking ass.

I think navigating adolescence, navigating adulthood, womanhood is very challenging. Even with all the books written about it, there's still no manual on how to do it.

And I imagine that doing that while building a career in Hollywood adds another level of complication.

Yeah, it's my life. It's the only thing I do. Everyone has their own complications. I do believe that God gives you something to work with and something to work on. I don't really sit around being like, "Oh, woe is me." I get paid to do what I love. Come on.

More like this
Michelle Williams Laughs Often About Motherhood Thanks To 'The Fabelmans'
By Marina Watts
Elizabeth Debicki On Her Approach To The Most Debated Scene From 'The Crown'
By Grace Wehniainen
Marcus Mumford, Open Book
By Ilana Kaplan
At 28, Prue Leith Was In A Secret Affair & Sharing Apple Pie With Stoned Neighbors
By Grace Wehniainen
Get Even More From Bustle — Sign Up For The Newsletter