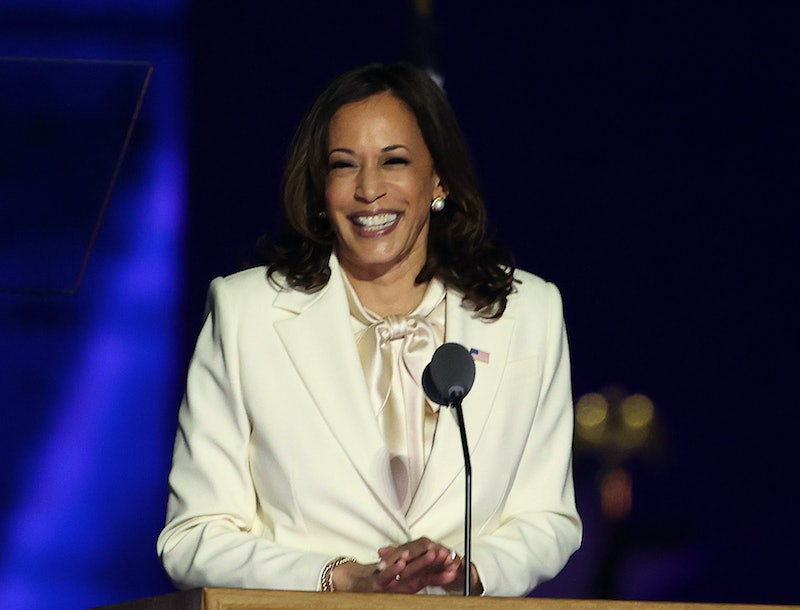 After Kamala Harris' Vogue cover leaked online on Saturday, Jan. 9, it caused a stir on Twitter for all the wrong reasons. Many people felt that the February 2021 cover did the vice president-elect a disservice. Some criticized the photo's lighting, pointing out how magazines often fail people of color, and others described it as "disrespectful" and "far, far below" the magazine's usual standards. Following the backlash, the publication announced on Tuesday, Jan. 19, that it would release a limited-edition cover of Harris in formal attire.

"In celebration of this historic moment, we will be publishing a limited number of special edition #InaugurationDay issues, featuring Vice President-elect @kamalaharris," Vogue wrote on Instagram alongside a photo of the incoming VP in a powder blue suit. However, the magazine failed to acknowledge the controversy surrounding the cover and Editor-in-Chief Anna Wintour's statement from Jan. 12, in which she responded to the criticism.

"Obviously we have heard and understood the reaction to the print cover and I just want to reiterate that it was absolutely not our intention to, in any way, diminish the importance of the vice president-elect's incredible victory," Wintour said in a statement issued to The New York Times podcast Sway. "We want nothing but to celebrate Vice President-elect Harris' amazing victory and the important moment this is in America's history, and particularly for women of color all over the world."

On the original cover, the VP-to-be is standing against a pink and green backdrop — a nod to her Howard University sorority, Alpha Kappa Alpha — wearing cropped pants, a blazer, and Chucks, a look she's been known to wear well. Unfortunately, it wasn't the image her team had chosen. "This is not the cover that the Vice President-elect's team expected,” journalist Yashar Ali tweeted after the image first leaked, adding that another picture was "mutually agreed upon," and that the cover was supposed to feature Harris in the blue suit.

On Sunday, Jan. 10, hours after the social media uproar, Vogue officially unveiled not one but two covers: the one that had inspired so much criticism, and the one of Harris in the suit.

At that point, it was reportedly too late for the magazine to make a full change. "I'm told this cover on the left will be the digital cover," Ali tweeted on Sunday, "but the much maligned cover on the right has already gone to print and will be the cover available for sale and sent to subscribers."

In Wintour's statement, she added that there was "no formal agreement" in terms of which cover would be used, but maintained that the editorial team felt that the less formal image "reflected the moment that we were living in" — citing the accessibility and authenticity of Harris in Chucks.

While the second cover received a much warmer reception, that didn't erase the initial criticism. As Twitter users were quick to point out, magazines need to do better when it comes to photographing and featuring people of color. Many called out Vogue’s history and leadership in particular.

The feature itself highlighted Harris' groundbreaking career, both before and after being elected the first Black, South Asian, and female vice president. Acknowledging the "great responsibility that comes with being a first," she reiterated her desire to "make sure [she's] not the last." So although the first Vogue cover featuring a female vice president wasn't the one people wanted, it will, at least, not be the last.

More like this
Confusion Reigns After Kanye Changes His Instagram Profile Pic To Kris Jenner
By Jake Viswanath
The Try Guys Cheating Scandal, Explained
By Grace Wehniainen
Kourtney Kardashian Claps Back At Pregnancy Speculation On Instagram
By Jake Viswanath
Here’s Everything You Need To Know About Operation London Bridge
By Bustle UK
Get Even More From Bustle — Sign Up For The Newsletter