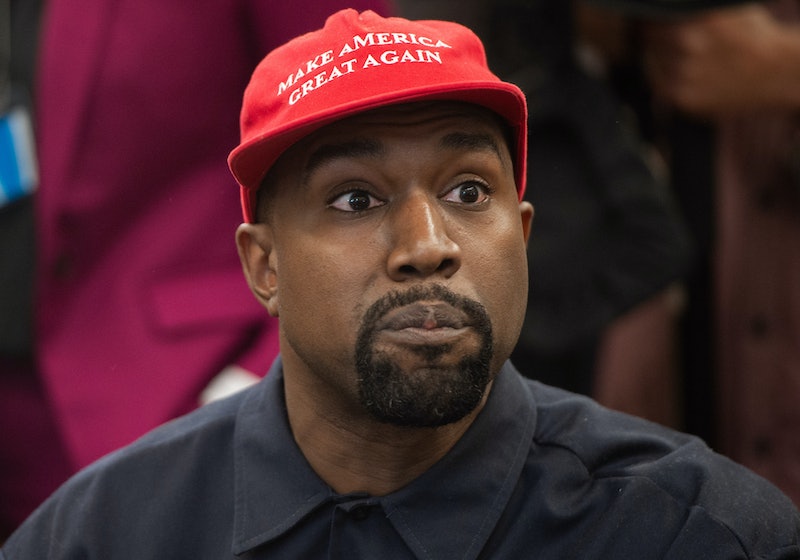 Kim Kardashian's hopes of becoming the next First Lady have been dashed. Kanye West has reportedly dropped out of the 2020 presidential race, after he initially announced that he was running for the office on the Fourth of July. Steve Kramer, who runs a firm that helps presidential hopefuls get on official state ballots and had reportedly been hired for West's campaign, told New York Magazine's Intelligencer that West was "out" of the running on Tuesday, July 14. Bustle has reached out to West's representatives for confirmation, but did not receive an immediate response.

Kramer claimed he was tasked with getting West on the ballot in Florida and South Carolina as a third party candidate running against Joe Biden and Donald Trump, efforts which have now apparently ended. In Florida, 132,781 valid signatures from registered voters were required before July 15 in order to ensure that West would end up on the state's 2020 ballot. That deadline passes today.

Kramer claimed that his team "had overwhelming support to get him on the ballot" and that West had both paid and volunteer teams working in Florida to get signatures before exiting the race. If he has indeed dropped out, then West's presidential campaign would have lasted less than two weeks. Though it's entirely possible that West will decide to revive his campaign before election day comes along.

Kramer told the outlet that the staff was, of course, sad to be out of a job, and were "disappointed" because they were genuinely excited about what the rapper's campaign represented. According to West's recent controversial interview with Forbes, his presidential platform included plans to run the U.S. like the fictional nation of Wakanda from Black Panther and a strong anti-abortion stance. To that end, West even repeated a debunked conspiracy theory that Planned Parenthood clinics were "placed inside cities by white supremacists to do the Devil’s work.”

West's election prospects were not hopeful from the beginning. By the Fourth of July, when he announced plans to run, West had not filed as an independent candidate with the Federal Election Committee and missed the deadline to do so in several key states, including New York, Texas, and now, Florida. And thanks to each state's differing rules on write-in votes, his chances of winning solely as a write-in candidate on Election Day were slim to none.

Regardless of the chaotic situation, Kramer has no hard feelings against the rapper. "I have nothing good or bad to say about Kanye," he said. "Running for president has to be one of the hardest things for someone to actually contemplate at that level," he added, noting that every first-time presidential candidate faces unexpected obstacles. Apparently, even expert momager Kris Jenner couldn't help him out for this one.

More like this
Everything You Need To Know About Kanye's Post-Kardashian Dating Life
By Bustle Editors
Taylor Lautner Thought Taylor Swift's 2009 VMAs Interruption Was A "Skit"
By Alyssa Lapid
Matt Hancock’s TikTok Is The Most Matt Hancock Thing Ever
By Sam Ramsden
North West Will Make Her Acting Debut Alongside Mom Kim Kardashian
By Radhika Menon
Get Even More From Bustle — Sign Up For The Newsletter
From hair trends to relationship advice, our daily newsletter has everything you need to sound like a person who’s on TikTok, even if you aren’t.