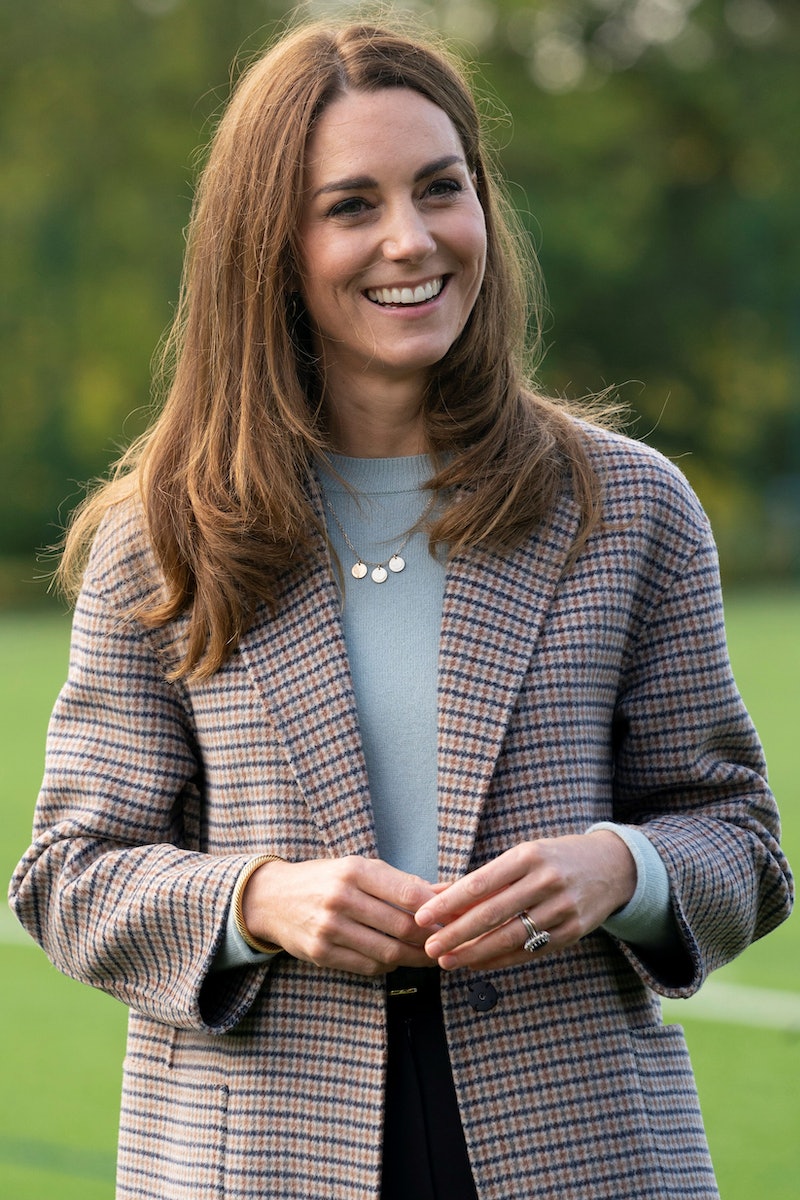 The Duchess of Cambridge did her first-ever podcast interview in February, and it turns out Prince William encouraged Kate Middleton to be very open during her conversation about motherhood. Happy Mum, Happy Baby host Giovanna Fletcher discussed the interview on the reality show I'm a Celebrity... Get Me Out of Here, and she revealed that the Duke of Cambridge had encouraged his wife not worry about censoring herself.

"He was briefing her and he said, 'Just talk. Don’t worry about saying anything you shouldn’t or exposing too much,'" Fletcher said, per People.

While the duke also assured her that they could still "change it in the edit" if need be, according to Fletcher, Middleton did indeed get candid about her parenthood journey. The chat, which premiered in mid-February, offered a new look at the Duchess of Cambridge's experience with pregnancy. Middleton revealed she dealt with hyperemesis gravidarum, or extreme morning sickness, during all three of her pregnancies and that she tried "hypnobirthing" methods for all her deliveries. She also spoke to Fletcher about the fear she felt during Prince George's first photo call, the "mom guilt" she experiences being away from kids to do royal duties, and more.

The interview clearly went well. Fletcher said that the two were originally scheduled for a 45-minute chat but ended up talking for so long that the two were "drinking cold tea" by the end. The podcast host even described interviewing the duchess as a highlight of her career and said that "in true mum fashion, we were nattering so much." Middleton won her over to the point that Fletcher added, "I might have fallen in love. A girl crush."

The Duchess of Cambridge recorded the interview as part of her "5 Big Questions on the Under Fives" initiative, which surveyed parents, carers, and teachers about early childhood development concerns. Fletcher's comments about the Happy Mum, Happy Baby appearance follow the results of the report being released by the Royal Foundation in November. On Nov. 27, Middleton posted a message thanking "families, parents, and carers" on Twitter, stating, "What you do takes hard, work, commitment, and vision."

The survey, which also focused on COVID-19's impact on parents, was published amid a larger effort to support pandemic relief. As another part of it, the Duke and Duchess of Cambridge embarked on a Royal Train Tour to support frontline workers on Sunday, with stops across England, Scotland, and Wales on the itinerary. The Kensington Royal Instagram posted about the train tour on Saturday, revealing the couple would support the "inspiring work of individuals and organizations that have gone above and beyond to support communities during this incredibly challenging year for the nation."