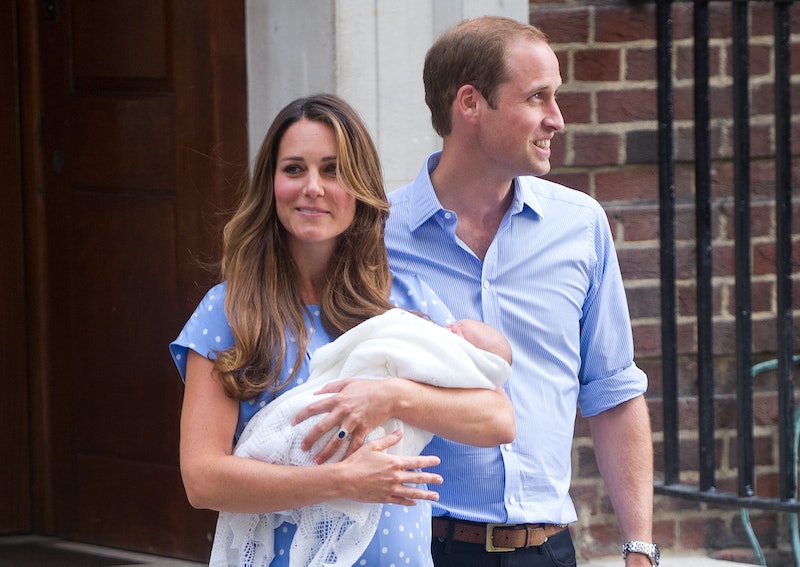 Prince George is already 6 years old, but royal watchers everywhere still remember the moment that he was introduced to the world by his parents, on the steps of St. Mary's Hospital in London. But while speaking about that moment in a new interview, Kate, Duchess of Cambridge revealed Prince George's debut in 2013 was "terrifying," but that she and Prince William, Duke of Cambridge felt they should share the big moment with the "supportive" public.

The couple's eldest child was born on July 22, 2013, and just one day later, Kate posed for photos holding the newborn in front of the Lido Wing, where she had just given birth. "[It was] slightly terrifying, slightly terrifying, I’m not going to lie," Kate admitted to author Giovanna Fletcher on the Feb. 15 episode of the Happy Mum, Happy Baby podcast.

Despite the overwhelming presence of the photographers, both Kate and William felt that it was "important" to do a photo call in order to show her gratitude for everyone's support over the previous nine months. "Both William and I were really conscious that this was something that everyone was excited about and, you know, we’re hugely grateful for the support that the public had shown us," she said. "For us to be able to share that joy and appreciation with the public, I felt was really important."

"But equally it was coupled with a newborn baby, and inexperienced parents, and the uncertainty of what that held, so there were all sorts of mixed emotions," she continued. In the end, the only thing Kate was concerned about in the moment was getting home with her newborn son so that they could relax and bond.

"I was keen to get home because, for me, being in hospital, I had all the memories of being in hospital because of being sick, so it wasn’t a place I wanted to hang around in," Kate explained, referring to the fact that she suffered from hyperemesis gravidarum, or extreme morning sickness. (Kate also battled HG during her two subsequent pregnancies, with Princess Charlotte and Prince Louis.) "So, I was really desperate to get home and get back to normality."

The duchess has opened up quite a bit about the struggles of motherhood over the past year, as part of her advocacy for early childhood development and her "5 Big Questions" survey, which aims to start a conversation that will "bring about lasting, generational change" for children in the United Kingdom. At a recent event a children's centre in Cardiff, Wales, Kate spoke about feeling isolated in the months following George's birth, as William was working with the Royal Air Force and the couple were living away from their families in London.

"It was the first year and I'd just had George [and] William was still working with Search and Rescue," she recalled, according to Hello magazine. "We came up here and I had a tiny, tiny baby ... It was so isolated, so cut off. I didn’t have any family around and he was doing night shifts."

While Kate's experience of motherhood might be dramatically different from most people's, by sharing the lows along with the highs, she's letting women everywhere know that they're not alone.

More like this
Kate Middleton Wore The Ultimate '90s Power Suit
By Sam Ramsden
Prince Harry Incorrectly Recites Christina Aguilera’s “Genie In A Bottle” Lyrics
By Jake Viswanath
18 Photos Of Jennifer Lopez’s Mansion You Can Now Buy For $42.5 Million
By Alyssa Lapid
The 12 Most Controversial & Unexpected Grammy Moments Ever
By Jake Viswanath
Get Even More From Bustle — Sign Up For The Newsletter
From hair trends to relationship advice, our daily newsletter has everything you need to sound like a person who’s on TikTok, even if you aren’t.