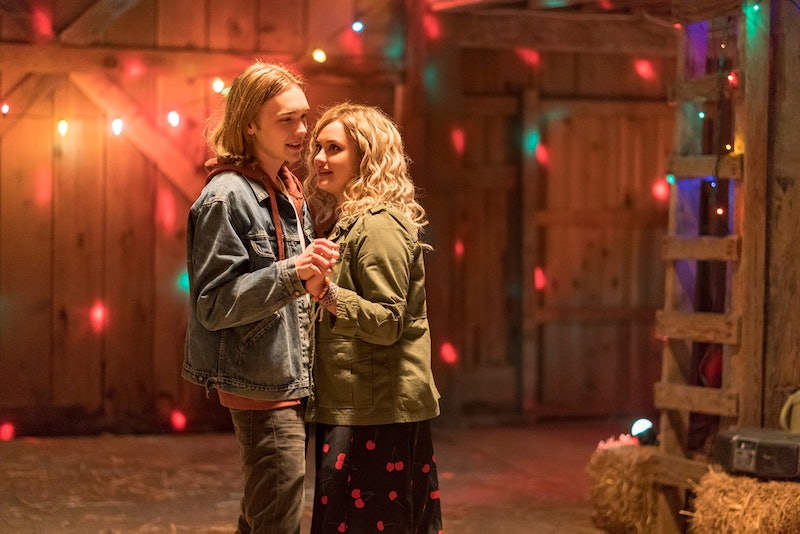 Adapted from Aaron Starmer's 2016 novel, Spontaneous focuses on a high school grappling with a different kind of pandemic — one that results in dozens of teens spontaneously exploding. Yes, exploding. And for Mara Carlyle (played by Katherine Langford) this chaotic disaster comes just as she meets Dylan (Charlie Plummer), the boy of her dreams. So here's how to watch Spontaneous in the UK, as this dark comedy already being compared to '80s cult classic Heathers.

Debuting theatrically in the States on October 2 (and streaming services on October 6), sadly there's still no concrete release date for UK viewers. Bustle has reached out to Paramount and production company Awesomeness TV for more info, but have yet to receive a reply.

Like Heathers, Spontaneous provides a spin on the classic coming of age trope with blood and gore. But that's not to say it hasn't got heart as the Hollywood Reporter notes, with the film becoming an "improbably moving portrait of loss and the sort of despair" teens often experience in its second half.

Spontaneous has also taken on a whole new meaning in the current climate, having been filmed two years prior to the pandemic. "When we shot this, it was complete satire with a little existential undertone," Langford previously tells Bustle. "It just felt so far removed. Now obviously it hits a lot closer to home." Director Brian Duffield agrees, saying that it gives audiences the opportunity to relate to a "scenario that's not entirely dissimilar from what the movie is," he recently told entertainment site LRM.

"I feel like a lot of the message is the stuff that we all are kind of collectively talking about [...] that you can't control the hand you're dealt. But to the best of your ability, you can control how you proceed from getting dealt a really crappy hand," whether that's a global pandemic or one that involves spontaneous explosion.