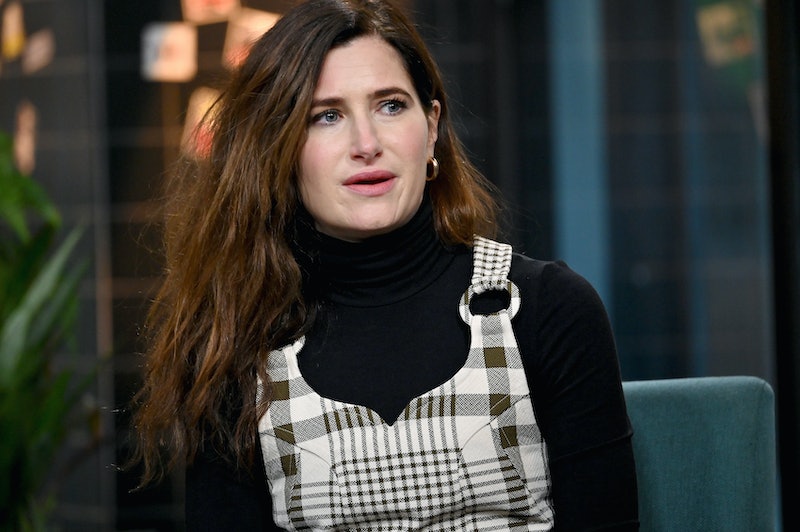 Beware of WandaVision spoilers ahead if you haven't watched Episode 7. A tune about a powerful witch named Agatha could end up being the catchiest song of the year — unless Rihanna finally releases new music. During a March 3 appearance on Late Night With Seth Meyers, Kathryn Hahn reacted to the success of her WandaVision anthem "Agatha All Along," which topped the iTunes soundtrack chart and landed at No. 5 on the all-genre chart. Fans first heard "Agatha All Along" on Disney+ during WandaVision's seventh episode on Feb. 19, at which time it became an instant viral sensation on social media, before Marvel officially released the song on music streaming platforms on Feb. 23. By the end of the week, "Agatha All Along" was No. 1 on iTunes.

Understandably, she's more shocked about its success than anyone. "I don’t understand it, it’s amazing,” she told Meyers. "Seth, what’s happening? I was like, 'What? Are you kidding me?'" However, because she doesn't have social media, Hahn found out the news while she was "outside scooping dog crap, scooping cat crap." For context, Hahn's 11-year-old daughter persuaded her family to foster kittens during the COVID-19 pandemic. "I will never hear my dryer without litter rattling around in it, but it’s been really, really sweet," she said.

The Bad Moms actor gave a shoutout to Robert Lopez and Kristen-Anderson Lopez, the Oscar-winning songwriting couple who penned all of the Disney+ show's wacky jingles and theme songs as well as "Let It Go" from Frozen and "Remember Me" from Coco. "It's totally, totally bonkers, but it's also a testament to the Lopezes, who just wrote that crazy, awesome, delicious, 47-second [song] … I mean, the whole thing’s so bonkers," she said.

The now-smash hit soundtracks the significant reveal that Hahn's character Agnes, the nosy but charming neighbor of Wanda (Elizabeth Olsen), is a secret witch named Agatha Harkness, a powerful force in the Marvel universe, and a theory that had actually been speculated among Marvel fans. And as expected, her introduction jingle is a campy, fantastical delight. "Who’s been messing up everything? / It’s been Agatha all along," Hahn sings on the track. "Who’s been pulling every evil string? / It’s been Agatha all along."

At the end of the interview, Hahn teased the highly anticipated finale of WandaVision, which premieres on March 5, saying that she thinks everyone's minds "are going to be blown" by the ending. "I think everyone's going to be very satisfied."