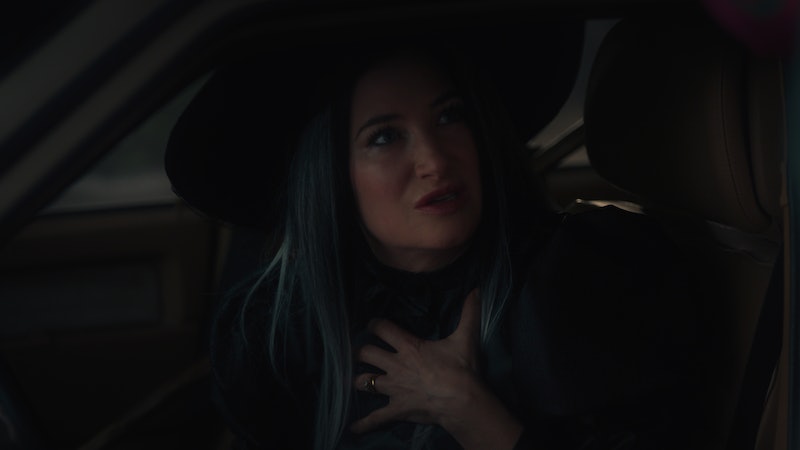 Spoilers ahead for WandaVision Episode 7, "Breaking the Fourth Wall." After weeks of speculation, WandaVision has finally confirmed that Wanda's "nosy neighbor" Agnes is indeed the powerful witch Agatha Harkness, and she's been manipulating Wanda from the beginning. Though it's not yet clear what role Agatha played in Wanda's creation of Westview's sitcom bubble, it's more than apparent that she's been scheming towards some unknown end.

For those unfamiliar with Agatha's role in the Marvel comics, she was first introduced in the Fantastic Four series as the governess of Franklin Richards, the son of Reed Richards/Mister Fantastic and Susan Storm/Invisible Woman. She was soon revealed to be a powerful witch who, in some versions of her origin story, actually survived the Salem witch trials, eventually becoming the leader of a coven of witches in New Salem, Colorado. But Agatha is best known for the comics storylines in which she became a sort of mentor to Wanda, teaching her how to control her powers.

The relationship between the two wasn't always smooth — especially in regards to Wanda's children. In the comics, Agatha (well, her ghost) is the one who helps Wanda learn how to use her magic to create her sons, Billy and Tommy. But after they discover Wanda accidentally created her twins from fragments of the demon Mephisto, the boys are reabsorbed back into Mephisto's soul. In an attempt to shield Wanda from the trauma and pain of losing her children, Agatha wipes her memory of the twins' existence. However, when Wanda is reminded that she once had two children during the Avengers Disassembled/House of M comics storyline, she confronts Agatha and (maybe) kills her before having a mental breakdown and creating an alternate reality so she can be with Billy and Tommy again.

All of that begs the question: what's Agatha Harkness's end goal on WandaVision? The "Agatha All Along" song sequence at the end of the Feb. 19 episode revealed that she was responsible for all sorts of chaos and mayhem in the town, including bringing the "fake" Quicksilver to Westview and killing Billy and Tommy's dog. What's not clear is why. But whatever Agatha's master plan is, Wanda's sons seem key to executing it.

When Wanda enters Agnes/Agatha's house, she notices that Tommy and Billy are missing and wanders down into the basement, where she finds an eerie old chamber with gnarled old tree branches covering the walls and a glowing magical book sitting on a table. The boys are nowhere in sight. One fan theory is that Agatha's plan was hinted at during the "Yo-Magic" commercial from the previous episode, where an animated boy is drained of all of his life and dies — suggesting that perhaps Agatha plans to drain Billy and Tommy of their newly acquired superpowers.

Another theory is that Agatha is planning to open the multiverse. Though this episode revealed that she's been manipulating Pietro, suggesting he could be just an evil imposter meant to distract Wanda and not the real Quicksilver from the X-Men Universe, fans believe there's an Easter egg in the "Nexus" anti-depressant commercial that indicates otherwise. In the comics, the Nexus of All Realities is an interdimensional portal where all of the Marvel universes (and alternate universes) intersect — allowing people to travel between realities. It's already been confirmed that Wanda will be making an appearance in the upcoming movie Doctor Strange in the Multiverse of Madness, which suggests that WandaVision is setting the stage for that film. It also reaffirms the possibility that the presence of this version of Quicksilver in WandaVision is more than just a cute nod to the X-Men universe, but actually marks the beginning of the multiverse — and that Agatha could be integral to the next phase of the MCU.

In the comics, Agatha Harkness is not always a villain. But WandaVision appears to be setting her up as an antagonist to Wanda, suggesting that Agatha's motivations within the MCU are a bit more sinister. Or, as some fans have been speculating, this change in Agatha's demeanor could be a hint that she's being manipulated by another, more evil source — potentially the demon Mephisto, or perhaps a reality-manipulating big bad named Nightmare. In a recent interview, Paul Bettany (the actor who plays Vision) confirmed that there's still a big cameo yet to come in WandaVision from an actor who Bettany has "longed to work with all of [his] life." If there's another character reveal coming before the end of the series, it's not a stretch to speculate that it could be another Marvel villain — and knowing WandaVision, it's sure to be a big one.

More like this
This New Comedy Is The Perfect Combination Of 'Jane The Virgin' & 'New Girl'
By Darshita Goyal
Who Is Tatiana Maslany Dating? The 'She-Hulk' Star Is Married To 'A Locke & Key' Actor
By Radhika Menon
Netflix Reveals First Look At Wednesday In The 'Addams Family' Spinoff Series
By Bustle Editors
'Better Call Saul’s Co-Creator Explained Jimmy & Kim’s “Happy Ending” In The Finale
By Brad Witter
Get Even More From Bustle — Sign Up For The Newsletter