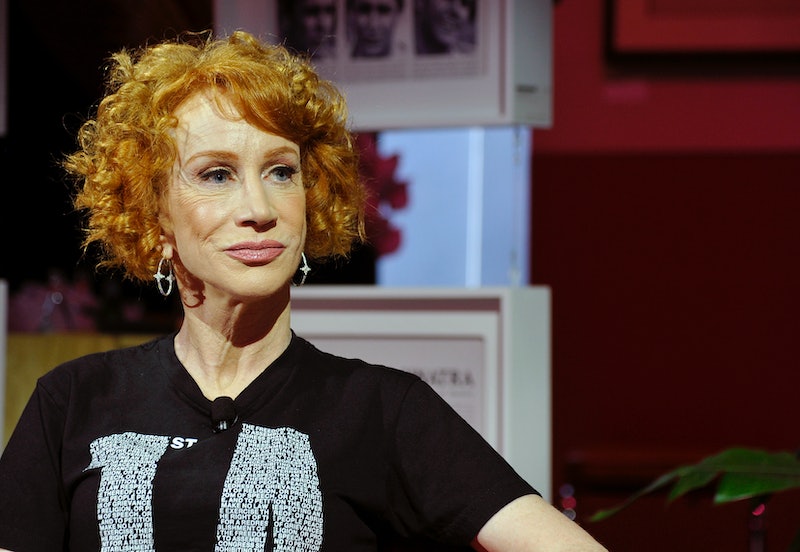 Years after Kathy Griffin shaved her head in solidarity with her sister, who died of cancer in September 2017, the 60-year-old comedian is now battling a form of the disease herself. Griffin just revealed that she has been diagnosed with stage one lung cancer in a letter posted to her Twitter and Instagram accounts on Aug. 2. “I’ve got to tell you guys something,” she began her note. “I have cancer.”

Griffin explained that she has lung cancer, despite never smoking in her life, and needs surgery. She also shared that her doctors were feeling hopeful about her recovery. “I'm about to go into surgery to have half of my left lung removed,” Griffin wrote. “Yes, I have lung cancer even though I’ve never smoked! The doctors are very optimistic as it is stage one and contained to my left lung. Hopefully no chemo or radiation after this and I should have normal function with my breathing.”

Griffin opened up further about her diagnosis in an interview with ABC News, explaining that she’s had a large mass on her left lung for the past several years, which never grew or showed any signs of cancer until recently. “I was definitely in shock,” she said about finding out the news. “I’m still a little bit in shock. Not denial, but ... once a day, I’ll just turn to like nobody next to me and go, ‘Can you believe this sh*t? Is this a bitch or what?’ It’s stage 1. It’s nowhere else in my body. So I need to focus on that.”

Griffin still has her signature sense of humor about the situation, and even her doctors are trying to impress her with their (lack of) comedic skills. “I’m about to lose half my lung, and by the way, can I tell you something? When you’re a comic, the doctors all wanna be funny,” she said. “I love when they try material on me, like it hasn’t been happening to me for 40 freaking years. He’s like, ‘Well, you know, the lung is actually a couple of balloons. And so we basically just deflate the lower balloon — remove it. It’s kinda like taking out a used condom. You can use that.’ And I’m, like, ‘OK. Why don’t you do the surgery and I'll do the jokes.’”

Griffin ended her note by encouraging her followers to keep up with their medical checkups and get vaccinated against COVID-19, saying her prognosis would be much worse if it weren’t for the vaccines. “Of course I am fully vaccinated for COVID,” she wrote. “The consequences for being unvaccinated would have been even more serious. Please stay up to date on your medical check ups. It’ll save your life.”

The news comes after a tumultuous period for the TV star, who was embroiled in controversy after a 2017 photoshoot that saw her posing with a bloodied mask that resembled Donald Trump’s likeness. The subsequent aftermath, including show cancelations and criticism from former peers like Anderson Cooper, caused Griffin to fall into a period of depression. In the new interview, she revealed that she developed an addiction to painkillers and attempted suicide at one point. “The irony is not lost on me that, a little over a year ago, all I wanted to do was die,” she told ABC. “And now, all I wanna do is live.”

More like this
The Black Lotus Staff Has "Had Enough" In The 'White Lotus' Spoof From 'SNL'
By Brad Witter
Kim Kardashian Gives “Bucket List Dream” Lecture At Harvard
By Alyssa Lapid
New Details About Jeremy Renner's Snowplow Accident Reveal The Actor's Intentions
By Sam Ramsden
Michael B. Jordan Tackled His "Public Breakup" With Lori Harvey On 'SNL'
By Brad Witter
Get Even More From Bustle — Sign Up For The Newsletter
From hair trends to relationship advice, our daily newsletter has everything you need to sound like a person who’s on TikTok, even if you aren’t.