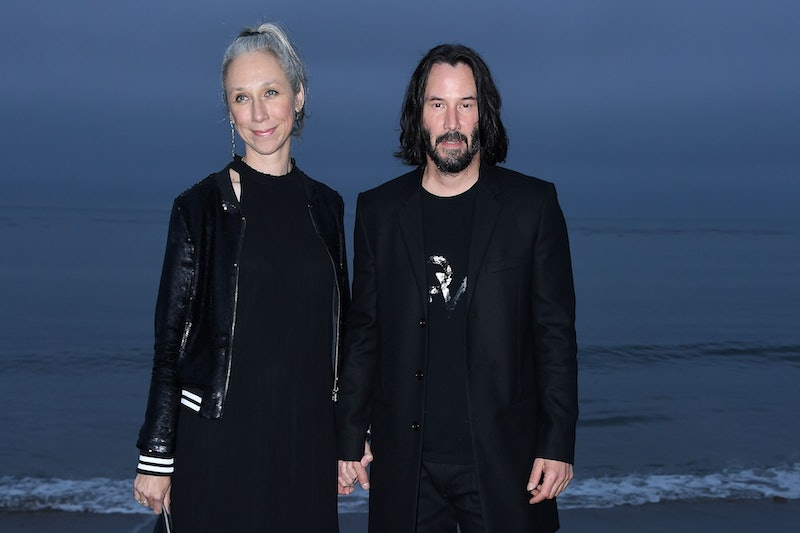 One of Hollywood’s nicest men and the internet’s perennial boyfriend has finally found his match (in real life). After years of speculation about his love life, Keanu Reeves has been dating Alexandra Grant for over three years now (at least publicly) — but it wasn’t love at first sight. In fact, they were creative partners first before becoming romantic partners over time.

The Matrix Resurrections star has apparently been friends with Grant, an artist based in Los Angeles, for over a decade, after meeting at a dinner party in 2009. They started working together about two years later, but it took them over eight years to finally become romantic. They only made their public debut as a couple in May 2019, which was reportedly a year or so after they started dating. Over two years after making their romance known to the public, Reeves and Grant appear to be going strong — even if they don’t let the public into their relationship much.

Prior to Grant, Reeves kept his dating life very quiet, and for good reason. In 1999, he dated actor Jennifer Syme, who became pregnant with their first child. Sadly, their daughter, Ava, was stillborn at eight months, and Syme later died in a car crash in April 2001. He also might technically be married to his Bram Stoker’s Dracula co-star Winona Ryder, but they were never romantically involved. The world has been waiting for Reeves to find happiness (especially in light of the Sad Keanu meme), and thanks to Grant, it looks like that’s happened.

Reeves and Grant were introduced to each other at a dinner party in 2009, according to Us Weekly. Sounds like someone had matchmaking on the brain. While their connection wasn’t romantic at first sight, they apparently hit it off, as they began a fruitful professional relationship afterward.

In 2011, Reeves and Grant worked on the actor’s first poetry book, Ode to Happiness, for which Grant created the illustrations. The book’s publisher describes it as a “grown-up’s picture book” and “a charming reminder not to take oneself too seriously.”

2015: They Create A Second Book Together

Four years after making their literary debut, Reeves and Grant collaborated once again on their 2015 book, Shadows. This time around, it was Grant in the driver’s seat, pivoting from her usual medium of painting to photography and using the actor as her subject, having him depict various shadows at her whim. Reeves also contributed poetic descriptions for each of Grant’s 54 photos, earning him a co-author credit.

2017: They Found A Publishing Company

Two years after their second book, Reeves and Grant cemented their creative partnership by founding a publishing company, X Artists’ Books. Since it was established in 2017, the company has primarily published coffee table books focused on the arts, including Blondell Cummings: Dance as Moving Pictures. “XAB is a small publisher of thoughtful, high-quality, artist-centered books that fit within and between genres,” their official website states. “Our books are works of art; portals to imagined worlds; treasured companions; the fabric of a community.”

2018(ish): Keanu And Alexandra Get Romantic

The timing on when Reeves and Grant went from collaborators to romantic partners is a little blurry. However, in February 2020, Grant’s friend, actor Jennifer Tilly, recalled that the artist revealed her relationship with Reeves “about a year and a half ago,” which means they likely started dating sometime in 2018 — or perhaps even earlier. “I remember a couple years ago, about a year and a half ago, [Grant] said, ‘Keanu Reeves is my boyfriend,’ and I’m like, ‘Wait. What? What? What?’” Tilly told Page Six. And the fact that it was Reeves wasn’t the reason she was surprised. “She was so cool I thought she was a lesbian,” Tilly said.

But in 2018, the couple still gave no indication that they were actually a couple. That August, the duo spoke about their creative projects to The New York Times for a profile that described Grant solely as Reeves’ “business partner.” According to the outlet, they make most business decisions for X Artists’ Books together, including finding art to spotlight on their own as they never accept submissions or use art agents. “Part of the genesis of X Artists’ Books was that these projects might become a performance or an exhibition,” Grant said.

In May 2019, Reeves and Grant attended the MOCA Benefit together in Los Angeles. However, no one suspected that they were an item just yet. Even the next month, when the couple posed together at the Saint Laurent Men’s SS20 show in Malibu while holding hands, most fans and reporters still didn’t catch on to the fact that they were romantically involved.

In November 2019, Reeves and Grant firmly confirmed their relationship by walking the red carpet together at the LACMA Art Film Gala and holding hands once again. They weren’t shy about sharing loving glances at each other, and finally, the public got the hint. Us Weekly then reported that the couple had “been dating for years,” and a source told People that he was happier than ever with the artist. “Keanu wants to openly share his life with her,” the source said. “He is extremely happy and grateful to have Alex in his life.”

2020: Alexandra Opens Up About Keanu

In March 2020, Grant opened up about her relationship with Reeves for the first time in an interview with British Vogue, saying it had been a whirlwind when the public finally found out about their romance. “I think every single person I knew called me in the first week of November, and that’s fascinating,” she said. “But the question I’ve been asking in all of this is: ‘What is the opportunity for good?’”

However, when asked how she feels about marriage, Grant kept coy. “Over a glass of wine… I would love to tell you,” she said. “Love at every level is deeply important to my identity. How’s that for dodging the question? I do not believe that isolation is the way. There is a period of isolation that I do as a painter, but I deeply value the experience of being in relationships.”

More like this
Remember When Benedict Cumberbatch Announced His Engagement In A Newspaper Ad?
By Hugh McIntyre
The 1st Photo Of Priyanka & Nick's' Baby Comes After 100 Days In The Hospital
By Jake Viswanath and Hugh McIntyre
Jason Oppenheim Broke Down In Tears Over His Chrishell Breakup On The 'Selling Sunset' Reunion
By Bustle Editors
Lisa Marie Presley Reviewed Baz Luhrmann’s ‘Elvis’ Movie On Twitter
By Grace Wehniainen
Get Even More From Bustle — Sign Up For The Newsletter