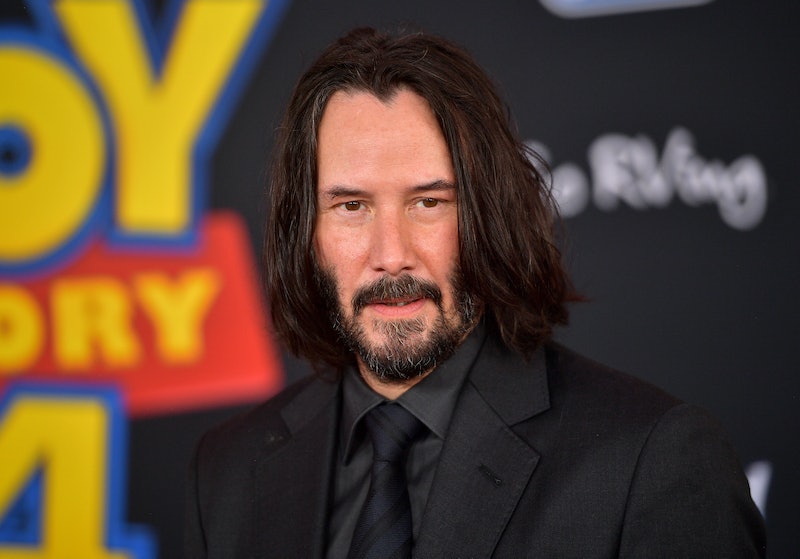 Keanu Reeves is the internet's reigning boyfriend thanks to his "nicest guy in Hollywood" status and his roles in John Wick 3, Always Be My Maybe, and Toy Story 4. But he could have added superhero (or villain) to his impressive résumé long ago since Marvel has asked Reeves to be in the MCU multiple times. In an interview with ComicBook.com, Marvel Studios President Kevin Feige noted that Reeves has been a bit of a white whale for the MCU. But Feige is hopeful, along with the MCU fandom, that they'll be able to find the right role and right time for Reeves one day.

During the London press junket for Spider-Man: Far From Home, ComicBook.com asked Feige specifically if the MCU in the future would cast the unexpectedly buzziest actor of 2019 — Keanu Reeves. "We talk to him for almost every film we make," Feige reportedly said with a laugh. "I don't know when, if, or ever he'll join the MCU, but we very much want to figure out the right way to do it."

Feige said the situation with Reeves is not unlike what happened with Jake Gyllenhaal. He said they approached the Brokeback Mountain star "multiple times" before the role of Mysterio in Spider-Man: Far from Home ended up working out. So with that elusive A-lister now a part of the Marvel universe, Feige noted how he hopes a similar situation will happen with Reeves. And fans have been into this combo too, even before Feige's statement to ComicBook.com.

It's easy to understand why the MCU is so desperate to get Reeves involved. Although the Keanussance is relatively new, Reeves has been starring in action movies his entire career. From Point Break to Speed to The Matrix to DC's Constantine and up to John Wick and even his character Duke Caboom in Toy Story, Reeves is no stranger to action-adventure and fight sequences. He's also not averse to franchises. Sure, he wisely didn't reprise his role of Jack Traven for Speed 2 (sorry, Sandra), but he has been involved in sequels since all the way back to Bill & Ted.

Now whether Reeves has the same passion and conviction to make a collaboration with the MCU work isn't as clear. But ScreenRant did report, as Murphy's Law Podcast host Charles Murphy tweeted, that Reeves was set to star in Captain Marvel. Murphy tweeted that conflicts with John Wick 3 meant that Reeves had to turn down the role of Yon-Rogg and Jude Law replaced him. More recently, MCU Cosmic reported that Reeves is being looked at for a role in The Eternals alongside Angelina Jolie and Richard Madden.

Even if Reeves doesn't sign on for The Eternals, there will be plenty of Marvel movies to come in the MCU's Phase 4 following Avengers: Endgame and Spider-Man: Far from Home. So fans on Twitter have already started coming up with ideas about which comic characters Reeves could play in future movies. Top contenders include Adam Warlock, Namor the Sub-Mariner, and Silver Surfer (which would bring Reeves back to his Point Break days). But really, it seems like any role Reeves took, people would be stoked.

With the Marvel comics, the MCU has plenty of material to work with. And with his Asian heritage, Reeves could add some much-needed diversity. So as Phase 4 of the MCU continues to roll out, fans have every reason to have faith that Reeves will be a part of this next Marvel era. And if not, well — there's always John Wick 4.