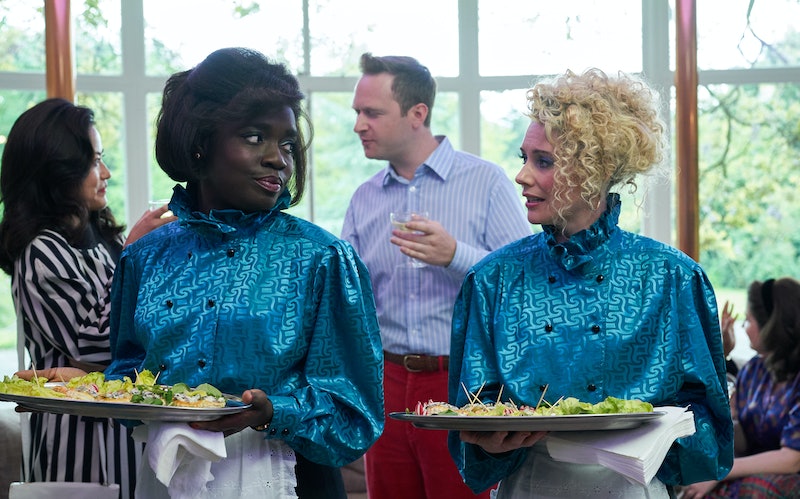 Some serious laughs and a dash of emotional turmoil await fans when In The Long Run returns for series three on July 23. With a near-fatal culinary disaster and some Poirot-style investigating to save the estate, the series is more warm and welcoming than ever, but there are significant changes on the horizon for its characters. Ahead of series three arriving on screen, I spoke to two of the show's stars, Madeline Appiah and Kellie Shirley, about the importance of seeing a West African family represented on TV and what viewers can expect from series three.

Created and written by Idris Elba, In The Long Run first aired in March 2018. The actor also plays the show's lead: Walter. Appiah stars opposite him as Agnes — Walter’s long-suffering wife and the estate matriarch. Nothing goes down on the Eastbridge Estate without going through her kitchen first.

Having appeared in a number of theatre productions during her career (including stints at the National Theatre with shows like Macbeth and Romeo & Juliet), the TV role was something totally new for Appiah. It sees her step away from 'classical' characters and embody someone with warmth, strength, strong mothering instincts, and a wicked sense of humour. Appiah describes Agnes as "awesome" and says she's grateful "someone like her exists." The start of series three brings trouble to her door in the form her mother-in-law who arrives on a visit from Sierra Leone and wastes no time sharing her opinions on how the Easmon family could be doing things differently.

Agnes wouldn’t get far without her onscreen best friend Kirsty (played by Shirley) who, in series three, is leaning on her nearest and dearest in the estate for help with a new business venture. Kirsty's trying her hand at culinary creations she believes will make her rich. But, of course, things don’t work out exactly how she plans.

Shirley will be very familiar to Eastenders fans, having played Carly Wicks in the soap for six years. The actor also appeared as the lead in Riot and Kick and was recently selected to be part of the BAFTA Elevate programme, which supports working class talent and underrepresented groups on screen.

In the Long Run has been celebrated for its feel-good energy, but for also tackling important topics including casual racism and the threat of gentrification, which sadly feel as relevant today as they did in the 1980s. In fact, Appiah and Shirley say this is one of the reasons they love being a part of In The Long Run so much. Here's what else they had to say about the show:

Alice Broster: What does it mean to you to be part of In The Long Run?

Kellie Shirley: It’s like no other series on TV. For starters it has a Black family at the helm which is unusual. It has loads of warmth, it’s really funny, and the most fun I’ve ever had on set.

Madeline Appiah: I have to echo that, I’m so proud of our show and when I grew up I didn’t experience seeing a West African family on our main screens. I love the richness and authenticity that Sky has embraced. It’s really got that nostalgic vibe of the '80s when you knew your neighbours and we talk about hard hitting topics but through comedy.

AB: What’s to come for your characters and how do you feel about returning?

MA: Agnes is awesome. I’ve never played a character like her. She’s up to all sorts, trying to save her community, raise her child through the ‘80s, and maintain her friendships which get really tested. She’s finding her identity and then has to welcome her mother-in-law to stay. She’s also got her hands full investigating, Agatha Christie style.

KS: Kirsty embodies working class aspiration for the '80s. Buying your own property was like a golden carrot dangled in front of people at that time and Kirsty really goes for it with a catering business to achieve that. She ends up creating some pretty wild dishes. I had loads of fun with the cooking. My sex life is also explored with Bagpipes [played by Bill Bailey]. How do you have a long term marriage and still find the fruitiness? He’s not that interested which kills her inside.

AB: The series touches on class and racial politics in the '80s. Do you think it depicts the reality of what life was like on estates at that time?

KS: It’s loosely based on Idris' life and he’s the real deal so he wouldn’t have it any other way than to have that level of authenticity. It’s like stepping back in time with the clothes and the music. It’s what my childhood felt like. They’ve been so careful about details. When you're watching a show it’s so obvious that as soon as you see or hear something that’s a little off it takes you out the story. We were filming in Peckham Market and everyone had their camera phones out and were filming. It took so many retakes to get it right and get them out of the shot. It was funny until we’d done it 15 times and it’d completely lost all humour.

MA: I’ve been a fan of Idris' for a long time. I’ve watched his career and he does everything he wants to do and so well. I used to work in a health spa in Mayfair with a friend who was a massive Idris fan. We were in our twenties and she had a phone case with his face on which I’d try to tell her wasn’t OK. She came into work one day flustered and said she’d seen him. She couldn’t get close enough to speak to him. So I said, “OK, let's pray that I can work with him one day then you will get to meet him. We said “amen” and then I got the audition to do the short film, King For A Term, which was a precursor for In The Long Run. I remember wondering how I was going to tell her. When we started filming season one I invited her on set. She said “hello” and kept it really cool and then walked around the corner into my dressing room and screamed.

I drove home that day and got quite emotional to think I prayed I’d work with him and it was something I really desired and now I’m playing opposite him.

AB: Community is central in the show, but developers start looking around the estate in series three. Gentrification is still a massive issue in many cities, do you think the series represents that?

MA: Absolutely. In the '80s people weren’t aware of the effect it’d have and Agnes is quite taken in by the idea that the estate will be done up but she’s not aware that that’s code for knocking everything down and pushing the locals out.

I grew in South West London and you can see that happening. Houses are being knocked down and people are having to be rehoused and communities are changing. You see it in Stratford at the moment. Where are the locals going? It’s criminal. Your work is there but you can’t afford to live. It’s horrible when it’s done slyly because suddenly you’ve got no choice or say.

It’s like the lockdown during the pandemic has heightened our senses to all the things that might have passed you by otherwise. Look at the social justice outcry, it’s incredible. And as disheartening and horrific as the things that are happening are, we’re having conversations on a grand scale.

KS: Even though the series is set in 1986 you can look at society today and say “this is happening now.” Take the gentrification and the racism, it’s all there.

AB: And Kellie, you were recently selected to be part of the BAFTA Elevate programme. How important do you think schemes like that are?

KS: BAFTA is looking to shake things up in the industry. I’m a woman in her late thirties, who is a mum, from a working class background and I've faced challenges in my career. In The Long Run is the first show I’ve ever been on where there are other people from working class backgrounds. It’s such a mish mash of people. I’d never worked with a Black cameraman before, I’ve only ever worked with two female directors and I’ve been in the industry for 21 years. BAFTA have been brilliant mentoring and to be on a roundtable with Stephen Graham and Shane Meadows has been amazing. I feel very lucky.

If you want to see Kellie Shirley and Madeline Appiah back in action for season three of In The Long Run tune into Sky One on July 23 at 10 p.m.