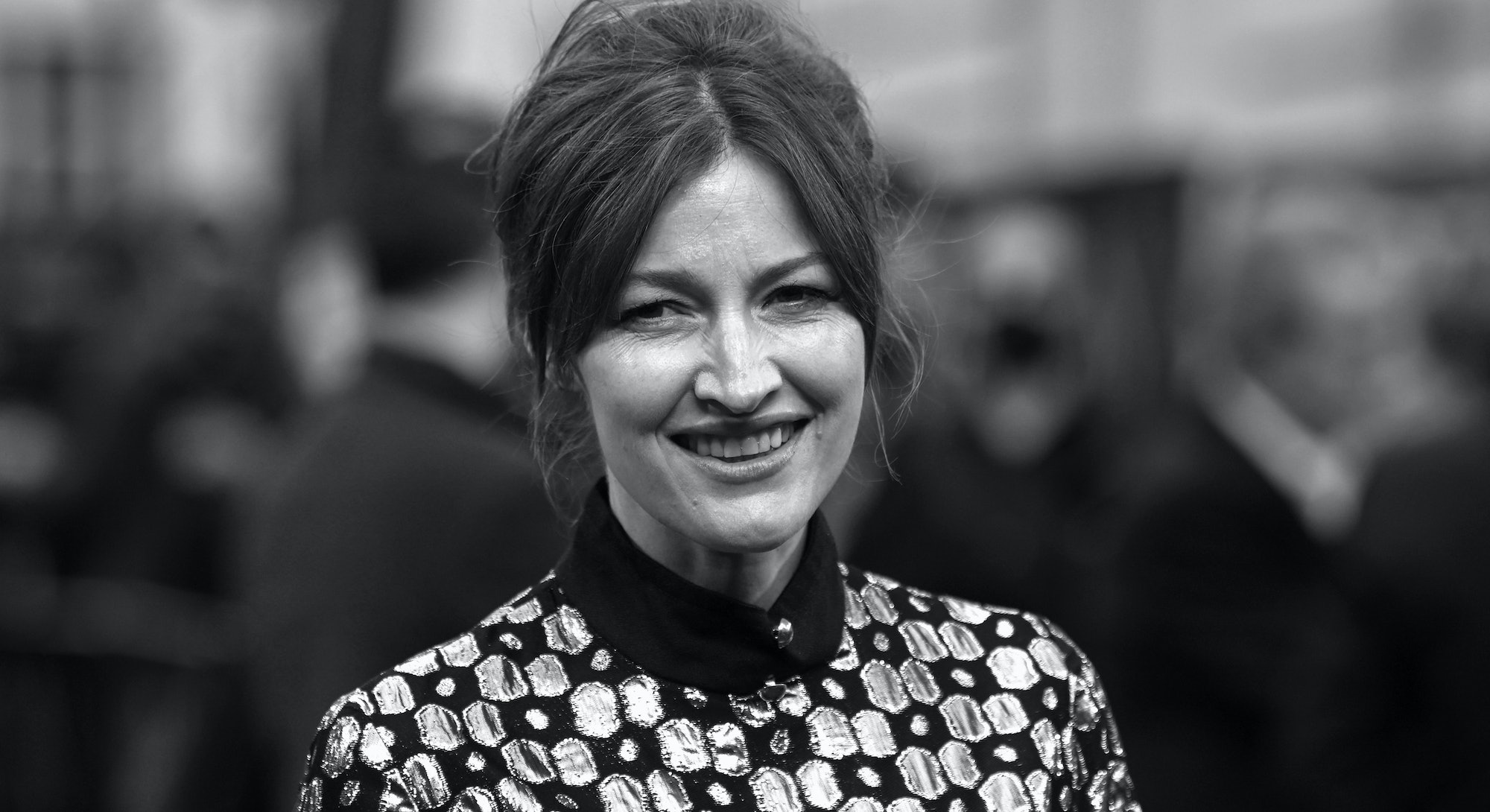 “Everybody seems to be in love with Jean. It’s a bit embarrassing, really,” Kelly Macdonald says with a laugh. The Scottish actor, who got her big break in the 1996 cult classic Trainspotting, is telling me about her lead role in wartime drama Operation Mincemeat. Based on a gripping true story — or “bonkers,” as Macdonald puts it — the film focuses on the mission of a small but mighty MI5 task force led by Ewen Montagu, portrayed by Colin Firth, and Charles Cholmondeley, played by Matthew Macfadyen (yes, Succession’s Tom). Macdonald delivers a captivating performance as MI5 clerk Jean Leslie, who plays an integral role in the government-sanctioned mission, alongside respected administrative leader Hester Leggett [Penelope Wilton].

As the film details, the group pulled off a cunning deception, hoodwinked dictator Adolf Hitler and, in turn, successfully disguised the Allied invasion of Sicily in 1943. They did this by taking the corpse of a homeless person and creating a uniformed alias for him: one Captain William Martin, known as Bill. Ahead of making sure the corpse was discovered by the right people, they planted forged letters on Bill from high-ranking officers relaying false information of the Allied forces’ battle plans. In an effort to make Bill a believable figure, the task force brought him to life (so to speak) by giving him a love interest: Pam. They positioned love letters from Pam with the corpse, and a picture, too. The woman in the picture was, in fact, Jean. In the film’s dramatisation of events, Jean puts herself forward to take an active role in the task force. But while tales of Bill and Pam’s love are being concocted, young widow Jean is also attracting attention, with both Ewen and Charles developing feelings for her.

“You can see why,” Macdonald muses. “Jean’s an independent woman of a certain age. She’s unmarried and has a career, and she’s put herself in the position of being part of their group.” The chemistry between Ewen and Jean is a focal point of the film, and the real-life kinship between Firth and Macdonald made it that much easier to portray. The duo are long-time friends, and acted alongside each other in the 2005 family film Nanny McPhee. In fact, it was Firth who first made Macdonald aware of Operation Mincemeat, having mentioned his involvement in the project during one of their lunches. Weeks later, Macdonald secured the female lead for herself. Of their on-screen reunion, she tells me: “Colin’s like family. We had the greatest time.” Macdonald had also worked with Macfadyen before, as the pair played husband and wife in the 2012 blockbuster Anna Karenina. “It was really nice going in and knowing them both,” the actor admits. “Colin and Matthew, the two Mr. Darcys, hadn’t met each other beforehand, but they’re really good friends now. It was lovely watching their relationship begin.”

Much like the film’s male protagonists, Macdonald was intrigued by Jean, and found her zest for life particularly inspiring. “During the war, nobody knew what was going to happen tomorrow, so people were living for the day. Even though it was a dark time, there was a great nightlife and dancing. People wanted that escape,” Macdonald remarks. “It was a bit like the pandemic. People couldn’t go anywhere, yet they just wanted to be somewhere else.”

As is the nature of their top secret mission, Jean and her co-workers aren’t heralded for their life-saving efforts. They’re more than happy to let their work speak for itself. This is something Macdonald, who retreats from the public eye in her native Glasgow, can relate to. “Fame is a funny old thing,” she says pensively. “I got very excited coming to London to do the press, but when it comes to the red carpets and stuff, I get a bit… I suddenly realise what I’m here for.”

How then, I wonder, did she deal with the immense spotlight that came with her starring turn in Line of Duty. “Badly,” Macdonald tells me, bluntly. “It was a very strange time for me because I’d never been so exposed. I had to stop going online.” The actor took on the lead guest role in the show’s sixth series, portraying the conflicted DCI Jo Davidson. The fact the show aired during lockdown in 2021 only added to the intensity of the experience.

“Everyone was so invested. The show is owned by the viewers. It was overwhelming,” the actor remarks. Although this came as a surprise to Macdonald, her co-star Adrian Dunbar, who portrays beloved AC-12 gaffer Ted Hastings, had tried to warn her of the intense scrutiny that comes with being part of the revered series: “He said, ‘Are you ready for this?’ And I thought I was, I thought I understood.” When the series aired, Dunbar made sure to check in on Macdonald: “He text me saying, ‘Now do you see what I mean?’” Pondering on the mark the show — and the attention that came with it — has left on her, Macdonald is unsure if she has fully processed that “odd” time in her life. “I’m going to need years. I need to look back at it from a distance,” she admits. “I find it hard to know how I feel about it all.”

Everyone was so invested in Line of Duty. The show is owned by the viewers. It was overwhelming.

As it happens, Macdonald has since filmed a guest spot in another show with a large following; she makes a cameo in Ten Percent, the hotly-anticipated British reboot of Netflix’s hit French series Call My Agent!. Much like its predecessor, the show follows the antics of a talent agency with a bevy of big name actors as clients. Macdonald leads the way in the series premiere, with the likes of Helena Bonham Carter, Emma Corrin, David Oyelowo, and Phoebe Dynevor making cameo appearances in later episodes. When she was first approached about the project, Macdonald didn’t hesitate to get involved. Thanks to a recommendation from her Operation Mincemeat co-star Penelope Wilton, the Scottish actor had watched the series during lockdown, and thought it was “incredible.” She was, however, a little apprehensive about taking part in a reboot of a show that’s so popular. “Everyone just loves the French one so much. It’s a lot to live up to,” she admits.

Interestingly, Macdonald didn’t feel the pressure of playing herself on camera until her first day on set. “I was doing the Lorraine Kelly show [for the storyline], and we were filming it in between segments of her actual programme. It felt like I was really doing the show,” the actor recalls. “It was only then that I actually started to worry about playing me, and how to do it.

In the first episode of the French series, celebrated Belgian actress Cécile de France makes a cameo appearance. We follow her story as she is told that she’s lost out on a major film role due to executives fearing she is too old to play the part. Upon hearing that her agent has lied to her about this, Cecile fires him. In the British version of the show, where Macdonald is the actress who misses out on a role over her age, things go a step further. When confronting her agent in a café, Macdonald pours a green juice over his head. Not a challenging stunt scene by any means, but it did end up being a little hazardous for the actor. “I’m wearing my own clothes [in that scene], so I got smoothie on my trainers, which is a bit annoying,” she tells me, sounding both amused and irked by the memory.

In Ten Percent, Macdonald is encouraged — by a talent agent, no less — to undergo cosmetic surgery in an effort to appear more youthful. Thankfully, the actor hasn’t been subjected to such treatment in her real life, but she has faced challenges of her own within the industry. “You can get a bit pigeon-holed in ‘mother’ roles, and people seem endlessly obsessed with making things about missing children,” she notes. And Macdonald is only too aware of the conversations surrounding female actors and their age. In fact, she’s made some changes of her own, albeit they’re a little less drastic than what’s suggested to her on-screen counterpart. “I’m in my 40s, so you do start to think about it [ageing]. I’ve started buying a slightly more expensive face cream,” Macdonald laughs. “And I wash my face at night now, so that’s new.”

A luxurious face cream and a nightly splash of water? Now that’s a beauty routine we can get on board with.