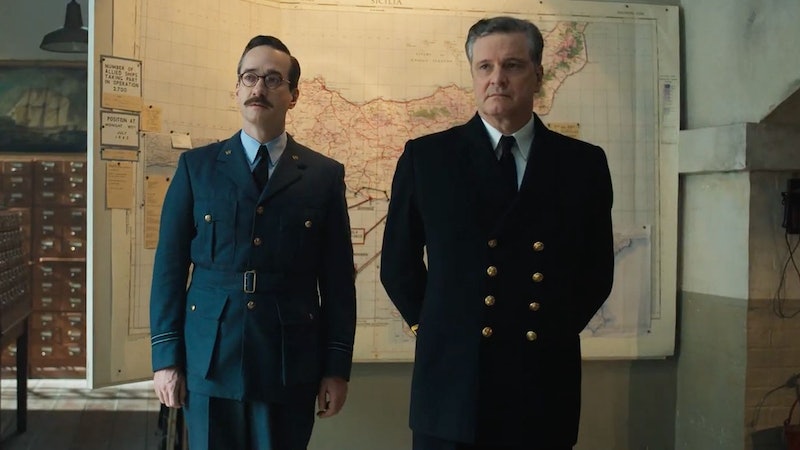 Operation Mincemeat will undoubtedly have viewers gripped from its opening scene. With an all-star cast led by Colin Firth, Kelly Macdonald, and Succession actor Matthew Macfadyen (yes, Tom), the film is based on the real-life story of how the MI5 successfully duped Hitler and, in the process, saved thousands of lives. Find out the full story, below.

Ewen Montagu (Firth) and Charles Cholmondeley (Macfadyen) led a small but mighty team in planning the mother of all ruses. Under the authorisation of Prime Minister Winston Churchill, the MI5 members set up a cunning deception in order to dupe dictator Adolf Hitler and successfully disguise the Allied invasion of Sicily in 1943. Having spent months agonising over how to do this, they decided to take the corpse of a homeless person — one Glyndwr Michael — and transform him into the fictitious Captain William Martin. Or Bill, as he became known among the MI5 team. Sounds unbelievable, but it very much happened.

With the help of a morgue, they kept the body in an acceptable condition as they came up with their plan. They created an entire identity for Bill — and even gave him a love interest, Pam. Having dressed the corpse in a Captain’s uniform, they planted letters on him from Pam, alongside a picture, too. The image of “Pam” was actually MI5 clerk Jean Leslie (portrayed by Kelly Macdonald in the film).

As well as the love notes, they planted fake letters from high-ranking officers, relaying false information that Allied forces were set to invade Sardinia and Greece. Once the correct forged documents were planted on the corpse’s person and attached briefcase, MI5 transported “Bill” (via van and submarine) to the waters of Southern Spain. They despatched the body in the sea and, as planned, it washed up on the Huelva shoreline, only to be found by local fishermen.

Thanks to certain corrupt officers, the documents of the letters were read, and the information was relayed back to Hitler’s camp. As such, Britain was able to pull off the Allied invasion of Sicily with great success and minimal casualties, as Hitler’s attention was directed elsewhere.

More like this
Everything To Know About 'The Undeclared War' Season 2
By Rachel Mantock
Yes, You Can Stream Machine Gun Kelly’s Life In Pink In The UK
By Rachel Mantock
Twitter Descends Into Chaos Over Boris Johnson’s Resignation
By Sophie McEvoy
Twitter's Reaction To The Great No.10 Exodus Is Comedy Gold
By Rachel Mantock
Get The Very Best Of Bustle/UK