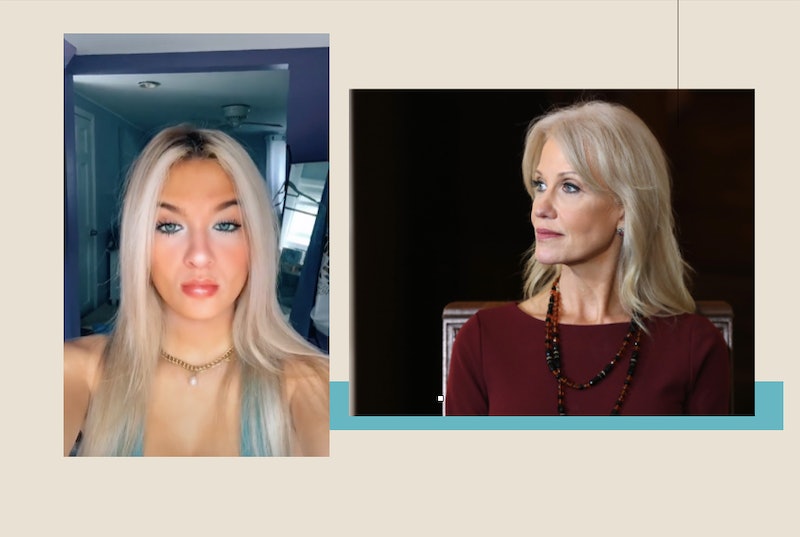 As Kellyanne Conway steps down from her position at the White House, her 15-year-old daughter Claudia Conway announced plans to emancipate herself from her parents in a series of tweets posted on Sunday, Aug. 23, alleging "years of childhood trauma and abuse." Hours after her declaration, Kellyanne announced that she would be leaving her post as Donald Trump's senior adviser at the end of August. And her husband and Claudia's father, George Conway, also announced that he was leaving his job at the Lincoln Project. Bustle attempted to reach out to both George and Kellyanne Conway, but did not receive an immediate response.

Kellyanne Conway's family has made headlines in recent months for publicly opposing her political views and criticizing Trump's performance as president, something her boss has not taken lightly. In December 2019, George co-founded the Lincoln Project, a conservative political action committee which aims to prevent Trump's reelection and has endorsed Democratic presidential candidate Joe Biden. Claudia, meanwhile, has spoken out about her "leftist" views on social media, publicly supporting the Black Lives Matter movement, and even asking liberal Rep. Alexandria Ocacio-Cortez, a common source of contention for many Republican politicians, to adopt her.

Now, it seems that Claudia's public opposition to her mom's boss has come to a head as she seeks to emancipate herself. And even she seemed shocked at her parents' respective resignations, judging by reaction videos she posted to her TikTok account. Here's everything you need to know about what went down.

Claudia first gained notoriety in April on TikTok, where she posts videos bashing Trump and criticizing his policies. She's also shared a few clips proving that she really is Kellyanne Conway's daughter. She also constantly pokes fun at how much she differs politically from her parents, describing herself as a “radical agnostic liberal/leftist." Claudia often reposts her political tweets to TikTok as well, including one where she called Trump a "f*cking idiot" for wanting to reopen schools during the coronavirus pandemic.

In July, Claudia claimed on Twitter that her parents made her delete all of her social media accounts, including her TikTok, as reported by The Cut. "Apparently, i don’t have a platform!" she wrote at the time. "It’s fake! Love you all so much. Keep fighting." However, just five days later, she was back on social media with a vengeance, promoting "Claudia Conway is a bad bitch" masks and publicly challenging her mother's politics on Twitter.

However, despite dismissing her mother's politics, Claudia tweeted on July 31 that she didn't want her followers to "send hate to my mother," adding, "I am not inciting hate or violence."

On Sunday, Claudia shared that she was "devastated" that her mother was speaking at the Republican National Convention this week in support of Trump, who is seeking reelection in November. She followed up the tweet by announcing that she was "officially pushing" to emancipate herself. "Buckle up because this is probably going to be public one way or another, unfortunately," she wrote. "Welcome to my life."

However, despite her very public opposition to her mom's boss and her political viewpoints, she insisted that her mother's job is not the reason why she is seeking emancipation. She attributed her decision to "years of childhood trauma and abuse," though she didn't disclose any specific allegations.

It seems that this is something Claudia has been considering for at least a few weeks. She previously hinted at taking legal action on Aug. 6, when she asked her followers to help her find "pro bono lawyers."

Claudia has not specifically stated how her parents have allegedly abused her or caused her trauma. However, in a TikTok video posted on Aug. 6, she claimed that her mother had her arrested for making "false allegations."

In a TikTok live video that has since been deleted from her account, she reportedly claimed that Conway had her arrested on fake assault charges, according to the Daily Mail and a Twitter user who reported on the live video. However, it's unclear whether the alleged arrest actually occurred, and her parents have not commented on the claims.

These claims also differ immensely from Claudia's previous public statements about her parents. In an interview with Insider published on June 30, she called her mother "her best friend" and a "badass" despite their political differences. "I love my parents," she said. "They are the most generous, most well-educated people I have ever met. I look up to them and want nothing but success and good fortune for them. They are my parents and that trumps all — no pun intended."

What Have Her Parents Said?

Neither Kellyanne nor George has publicly commented on Claudia's social media habits. When Kellyanne announced her decision to exit the White House, she attributed it to needing to focus on her family — without mentioning the emancipation claims. “Our four children are teens and ‘tweens starting a new academic year, in middle school and high school, remotely from home for at least a few months,” Conway wrote in a statement. “For now, and for my beloved children, it will be less drama, more mama.” George said he was leaving the Lincoln Project to "focus on family matters," but did not comment on Claudia specifically.

Despite not addressing Claudia's social media activity, George asked reporters on Twitter in July to stop contacting his daughter, saying that he and his wife "do *not* consent to any communications between you and any of our minor children." According to the Cut, Claudia retaliated against her father in a series of tweets that have since been deleted, telling him, “you’re just mad i’m finally getting my voice heard. sorry your marriage failed." She then continued to tweet against Trump, seemingly unbothered by the incident.

After Kellyanne announced that she would be leaving the White House, things were relatively quiet on Claudia’s TikTok — until Trump tested positive for coronavirus on Oct. 1. Reporters have since speculated that Trump and many of his staff members contracted the virus during an event for Supreme Court nominee Amy Coney Barrett, including Kellyanne, who confirmed that she also tested positive on Oct. 3 — but only after Claudia told the world about her mother’s diagnosis on TikTok.

Claudia initially posted that her mother was showing symptoms around the house, before confirming that Kellyanne had COVID-19 in another video, shared on Oct. 3, and expressing her rage toward Trump for not taking the pandemic more seriously. The next day, she revealed that she had also tested positive for coronavirus, and, in a TikTok comment, she accused her mother of initially lying about her test results, claiming that Kellyanne told her family that she tested negative. The former White House employee refuted these claims in another, since-deleted TikTok, insisting that she had taken three tests, and the first came back negative, with subsequent tests coming back positive.

Claudia also speculated about Trump’s condition after it was reported that Trump was doing well enough to be discharged from Walter Reed Hospital and head back to the White House on Oct. 5. According to Claudia's TikTok comments, however, the President was doing "badly" and "they are doing what they can to stabilize him."

Later that night, the teenager's livestream on TikTok raised concern when she began to speak in pig latin, suggesting she didn’t feel comfortable talking to the public about something while in her own home. However, she repeatedly told followers that she was OK and not in any immediate danger.

After her daughter began to go viral, Kellyanne responded to the speculation surrounding her family on Twitter late Monday night. “My daughter, Claudia, is beautiful & brilliant,” she wrote. “She has access to top doctors & health care & lives comfortably. Like all of you, she speculates on social media. Yet she’s 15. You are adults. We have COVID, but it’s clear who’s really sick.”

More like this
Kim Kardashian Remembers Her Last Words To Death Row Victim Brandon Bernard
By Jake Viswanath
Cardi B Explains To David Letterman Why She Uses Her Star Power For Politics
By Jake Viswanath
What Is Barack Obama’s Net Worth? He Makes *Way* More Now As An Ex-President
By Hugh McIntyre
President Zelensky Spoke Out On Ukraine's Chances Of Hosting Eurovision Next Year
By Sam Ramsden
Get Even More From Bustle — Sign Up For The Newsletter