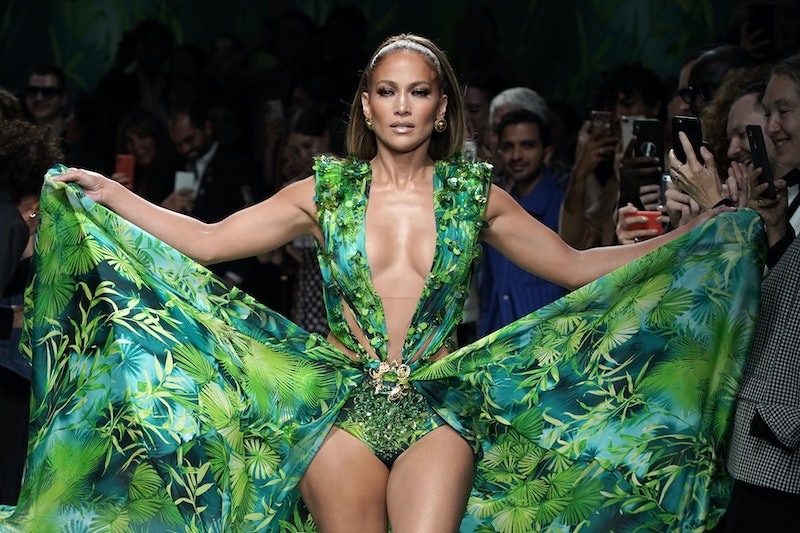 Imitation may be the highest form of flattery, but RuPaul’s Drag Race Season 14 contestant Kerri Colby’s “Night of 1,000 J. Los” challenge costume was the real deal. Nearly 20 years after Lopez’s iconic green silk chiffon Versace jungle dress at the 2000 Grammys quite literally spawned the creation of Google Images, the singer wore the remixed version to close out the fashion house’s September 2019 Milan runway show. The latter then reappeared on the Friday, Jan. 28 Drag Race episode when Kerri sashayed down the runway.

“It is the same dress, so it was a feature moment that was a very limited quantity made for Versace that year. I happened to be able to get my hands on the same exact garment,” Kerri shared during Entertainment Weekly’s Quick Drag Twitter Spaces after the episode aired. “Honey, you just gotta make sure you get the right type of friends so when these crazy moments come around, you’ve got to hit them up!”

Crediting “a few fabulous friends” with access to an exclusive fashion archive, Kerri added that she had to keep her sartorial secret weapon under wraps. Since her contact is “basically like family,” she knew she was “asking for death,” but didn’t have to sign “any crazy contracts” or “sell [her] soul” to borrow the dress. “I definitely had to return it as soon as I got back,” the Texas native added. “That was literally my lifeline.”

Indeed, Kerri’s poor performance in the challenge’s acting component landed her in the bottom two, forcing her to face off against against Alyssa Hunter in a lip sync battle to Lopez’s 2001 hit, “Play.” In the end, the flowing Versace gown gave her just enough to werk with to put her over the top, and Ru ultimately sent Alyssa packing.

And it appears Lopez — who also appeared virtually during the episode to wish the 13 queens luck in the challenge — gave Kerri her stamp of approval, too. After the episode, the “Love Don’t Cost a Thing” singer shared a video of Kerri’s runway walk on Twitter, adding three green heart emojis.

Only time will tell if the dress will provide the same launchpad that it did for Lopez. “In terms of my career, this dress really marked a moment in time,” she told Vogue after walking in the Versace show. “If you don’t know my music and you don’t know my movies, people know about that moment and that dress — that was it.”

Donning Versace’s sleek creation decades later hit a different note, however. As Lopez shared with Vanity Fair in February 2020, “The second time I wore it and walked out there, it was such an empowering thing. Twenty years had gone by, and I think for women, knowing you can put on a dress 20 years later—it resonated. It was like, ‘Yes, you know, life is not over at 20!’”