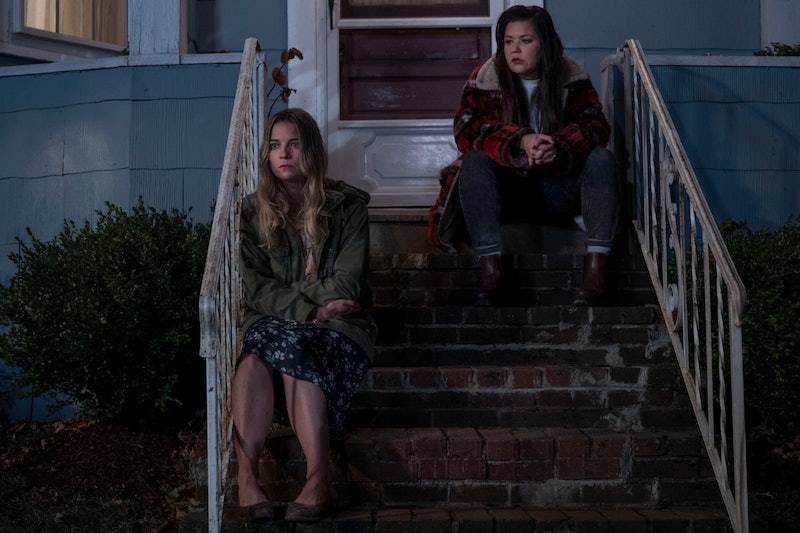 Towards the end of the premiere episode of AMC’s new comedy Kevin Can F**k Himself, Allison (Annie Murphy) sits on the stoop of the starter home that’s doomed to become her forever home and tries to convince her neighbor Patty — or maybe herself — that the situation isn’t as pitiful as it looks. “I know it doesn’t seem like it, but I know how to work Kevin,” Allison says of her husband, who’s inside funneling beer. “Wake the hell up,” Patty (Mary Hollis Inboden) tells her, unwilling to indulge the fantasy. The conversation is an inciting one: this isn’t another show about a sitcom marriage. It’s about centering the sitcom wife.

It’s hard to discuss Kevin Can F**k Himself without first talking about how it’s constructed. The series isn’t so much a genre parody as a genre collage. The scenes that feature Kevin unfold in a brightly lit, multi-cam format as recognizable as any on television. Kevin needs no introduction or backstory — he is the dolt husband from King of Queens and Kevin Can Wait and exists all the way back to The Honeymooners — while Allison is an embellished version of the traditional sitcom wife: naggier, more sublimated. But Kevin Can F**k Himself also gives Allison something other sitcom wives aren’t afforded: scenes between the ones she shares with her husband. These are washed out, grim, and filmed single-cam. She has no friends, no hope. That is, until she strikes up a conversation with Patty, similarly alienated by her sidekick role as “one of the boys.”

Understanding Allison and Patty’s relationship is what helped “crack the show open” for series creator Valerie Armstrong. “It's actually a story about two women. It's not a story about a toxic marriage. It's about how two women can get each other out of toxic situations,” Armstrong tells Bustle. Though she was inspired to reexamine sitcom wives after listening to actresses lament these one-dimensional roles, the concept for Kevin Can F**k Himself soon evolved from a gimmick into a metaphor. In the laugh track, we see the benefit of the doubt always afforded to men like Kevin, and the way the sitcom “regenerates every week” — the same format, the same gags, neatly resolved each time — calls back to the old adage about how men never change. Patty and Allison are victims of the genre. “They were always pitted against each other and never knew it,” Armstrong says.

Armstrong grew up on sitcoms just like these — she could tell you the time of day based on which rerun was playing — so Kevin Can F**k Himself is less a take down of the form than an exploration of its gaps. What if the scene doesn’t end for the sitcom wife when the kitchen door swings shut? What if there are no commercial breaks from being the wet blanket? What is the existential tax when a woman is reduced to the obliging wife or just one of the guys?

“That is the point of the show to me,” says Armstrong, who differentiates Kevin Can F**k Himself’s perspective from the more hackneyed criticism that sitcom marriages often seem improbable. “Everybody would see the billboard of Kevin James and whomever his newest wife was on a sitcom. They say, ‘Really? Her with him? That doesn't make any sense.’” For once, Armstrong “wanted to say, yeah, she's with him. This is everything in her past, in her personality, in her makeup that made this happen. That's why she stayed.”

Ultimately, Armstrong wants to make viewers feel like Patty does when she finally tells Allison to wake up: tired of laughing at a version of the same joke told by a version of the same man at the expense of the same wife. “The true dream reaction of watching this show is a woman seeing Allison and then sort of looking around [at her own life] and being like, Do I have to be here?”