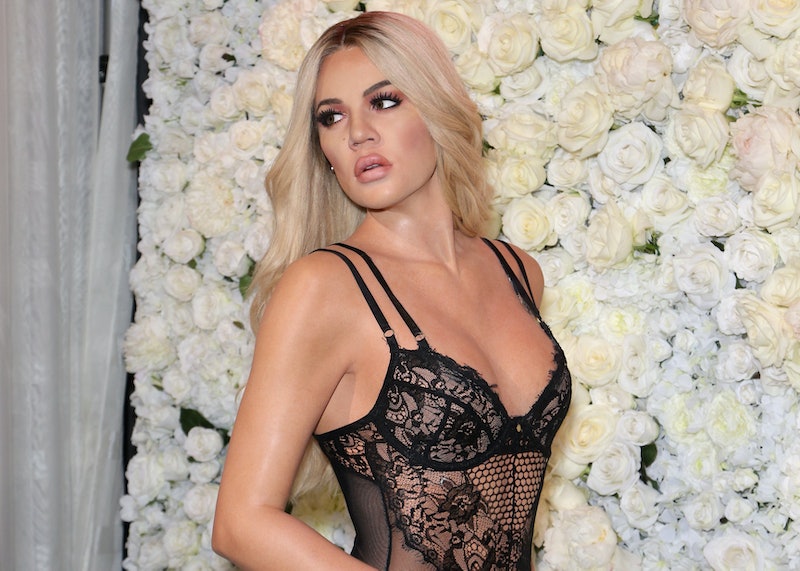 The Kardashian family is no stranger to pregnancy rumors, especially when reports about their romantic lives are at an all-time high (which is nearly always). But one of the sisters has some solid evidence that dispels any speculation. When one of Khloé Kardashian's Twitter followers theorized that she would announce she's expecting another child sometime soon, the reality star clapped back at the false assumption in the most fabulous way.

It all started on Monday, Nov. 2, when Kardashian posted pictures of her family's Halloween costumes on social media. The Good American founder dressed up as Cleopatra, showing off her abs in a glamorous metallic gold costume, while her rumored on-again boyfriend Tristan Thompson was Mark Antony, the Roman general who had a scandalous love affair with Cleopatra in 42 B.C. According to Kardashian's Instagram, their two-year-old daughter True was transformed into a "royal highness."

In the comments, one of Kardashian's followers guessed that the star would have some big news to announce in the near future. "Still convinced @khloekardashian is going to tell us in a couple months that she's pregnant," the fan tweeted. Needless to say, Kardashian had a quick response to that assumption, pointing to her costume pictures as a denial. "Well my abs say otherwise babe," she quipped.

Of course, this isn't the first time Kardashian has had to dispel pregnancy rumors. Back in May, fans speculated that she was expecting baby No. 2 with Thompson after she began posting throwback photos and recent pictures where she was sporting oversized clothes. The theory sparked a lot of backlash among fans given Thompson's alleged cheating scandal with Jordyn Woods. Ultimately, Kardashian felt compelled to both shut down the rumors and call out hurtful responses from critics on Twitter.

"I am disgusted by so many things I am seeing," she wrote. "SMH people swear they know everything about me. Including my uterus. Sick." In a separate tweet, she made it clear that if she did decide to have another baby with Thompson, it's her business and hers only. "The nasty things you're saying about me over A RUMOR!" she added. "I have seen so many hurtful/despicable stories and tweets about me over a false story. And if it were true.... it's MY LIFE, NOT YOURS." So while her abs prove that she's not currently expecting, perhaps now is a good time for fans to stop with needless speculation.

More like this
Khloé Kardashian Writes Touching Instagram Tribute To Tristan Thompson’s Mother
By Alyssa Lapid
This Pre-'Love Island' Video Of Olivia & Zara Together Changes Everything
By Bustle UK
Twitter Can’t Make Up Its Mind About Ekin-Su’s 'Dancing On Ice' Skate-Off
By Sophie McEvoy
Twitter Is Saying The Same Thing About Ekin-Su’s 'Dancing On Ice' Debut
By Sophie McEvoy
Get Even More From Bustle — Sign Up For The Newsletter
From hair trends to relationship advice, our daily newsletter has everything you need to sound like a person who’s on TikTok, even if you aren’t.