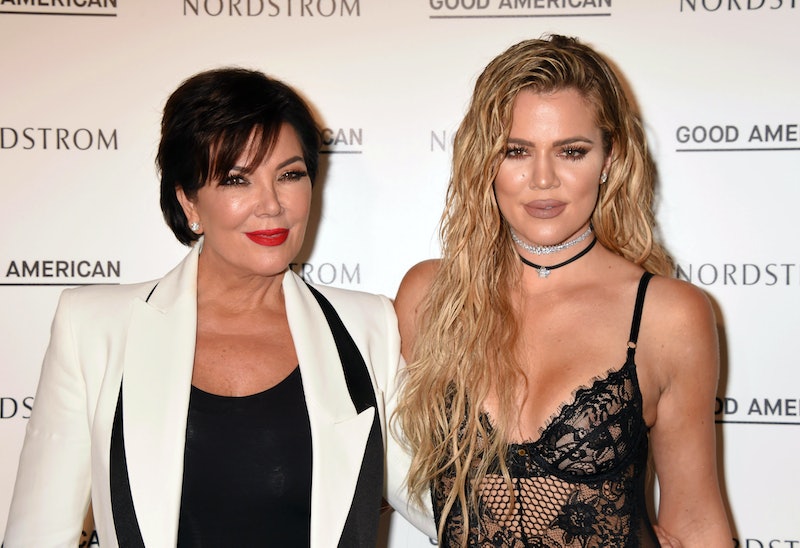 After 20 seasons of Keeping Up With the Kardashians, Khloé Kardashian has a bone to pick with momager Kris Jenner. During a recent appearance on Side by Side with Malika & Khadijah, the Good American founder told her two best friends, Malika and Khadijah Haqq, that Jenner “misled” her and Kourtney Kardashian at the start of the show. According to Khloé, the sisters were under the impression that filming would only take place at their stores. But soon enough, the cameras were following them everywhere.

“My mom sort of misled us a little bit [and] was like, ‘Yeah, we’re just going to film at the stores. That’s all you have to do,’” Khloé recalled. “And we did it but we didn’t really know what we were getting into.” Once they started filming, things quickly changed and the sisters decided to go along with it. “We were just like, ‘Okay, we’re already here. We’ll just do it,’” she said. But of course, they had no way of knowing that KUWTK would become the cultural phenomenon that it ultimately became.

“It all snowballed into something else, but in the beginning, I don’t think any of us knew what we were doing,” the reality star continued. Khloé and Kourtney weren’t the only ones who weren’t fully aware of how involved they would become in the series, either. “I remember one time I was in Dash, this is when I was working there, and your mom was like, ‘We’re doing a show, everybody look alive, sign that right there, let’s go,’” Malika said. “That sounds like her!” Khloé responded.

The 37-year-old went on to say that there was never even a discussion about whether or not Malika and Khadijah wanted to be on the show. “We never really had a conversation about you guys being on Keeping Up,” Khloe told her friends. “It was just sort of like all or nothing.” Fortunately, the twins have no regrets about their involvement in the series. “We knew whatever [Khloe] was doing, we were riding with her,” Malika said.

This isn’t the first time Khloé opened up about the humble beginnings of Keeping Up With the Kardashians. In January, she revealed that, at one point, she didn’t think the show was going to air. “I think we shot a pilot or something for Ryan [Seacrest] and it didn't go anywhere,” she said during an appearance on The Kelly Clarkson Show. “And then a show on E! fell through, so they needed something to fill this dead air time. And they were like, ‘You’re getting on the show, start filming, you’re getting on the air, like, in two weeks.’”

Khloé remembered that the famous family was “so excited” about the show, but that they were told not to get “too comfortable” because the show was only meant to be “filler.” In some ways, though, hearing that from the network took a lot of pressure off. “I actually really appreciate that because we were just thinking, ‘Oh, we’re not gonna have a season two, let’s just film, it’s fun, let’s just be ourselves. This isn’t gonna go anywhere,” she said.

“We didn’t even have time to think about it; to really, like, have any pre-conceived, fake anything,” Khloé told Kelly at the time. “It was just who we are on the fly and I think that’s what made the show so good... we just weren’t thinking.” As die-hard KUWTK fans know, the hit reality show went on for 14 years and a whopping 20 seasons. Not to mention, it changed the Kardashian-Jenner’s lives forever. “It turned out that was probably the best thing to happen to us,” Khloé said. “It was so, I think, relatable and realistic to some people.”