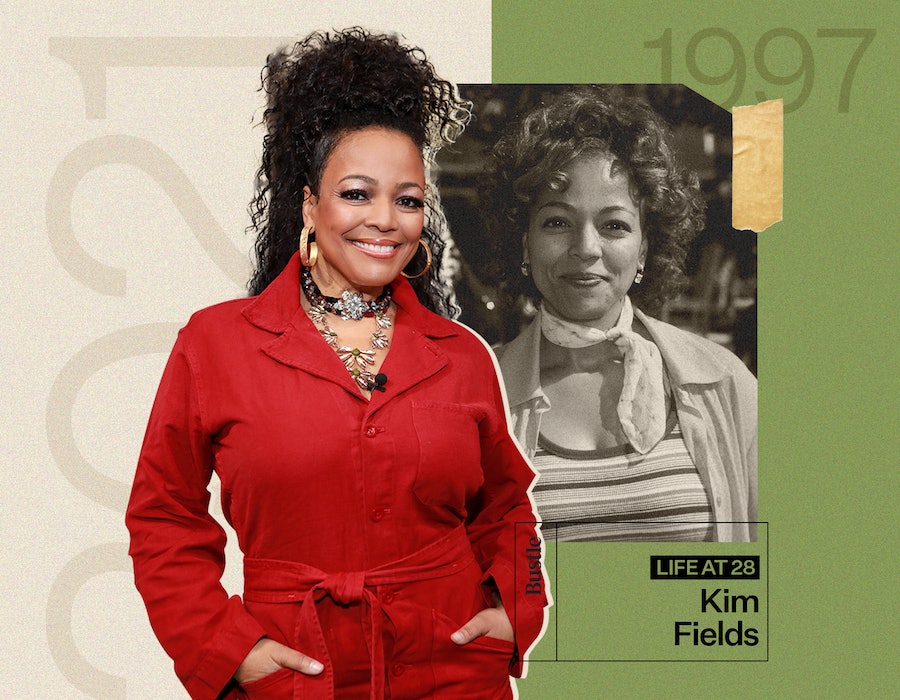 In Bustle’s Q&A series 28, successful women describe exactly what their lives looked like when they were 28 — what they wore, where they worked, what stressed them out most, and what, if anything, they would do differently. This time, Kim Fields talks her latest show The Upshaws, her years on Living Single, and embracing her inner badass.

From Tootie on Facts of Life and Régine Hunter on Living Single to stints on Dancing with the Stars and The Real Housewives of Atlanta, Kim Fields knows a thing or two about reinventing herself. But while her latest role as working mom Regina Upshaw in Netflix’s The Upshaws could be viewed as a return to her sitcom roots, Fields is still discovering new parts of herself within familiar territory.

“Honestly, I wasn’t checking to do another sitcom, and I certainly wasn’t checking to be in a house with a bunch of people again since that’s been much of my career [with Facts of Life and Living Single], but the tone of the show and the character felt like uncharted waters for me,” Fields tells Bustle. “At this stage of my career, it’s all about how I can stretch out as a director, or a producer, or an actor and overall artist.”

Back when she was 28, Fields was far less optimistic about her personal and professional future. Let down by the entertainment industry and in a marriage on its last legs, she didn’t know where to turn. “I wasn’t angry at God, but I was severely disappointed. I remember thinking, ‘What are y’all doing up there with me?’” she says. “I felt like I planted tomatoes and I got telephone poles in my vineyard. It felt so foreign.”

In the decades since, Fields went on to do theater, direct several sitcoms (including Tyler Perry’s House of Payne), write a memoir, and launch her own collection of gourmet coffee and teas. It’s a testament to the Harlem native’s decades-long acting career as a Hollywood rarity who overcame the child star curse and refused to fade into obscurity.

Below, Fields, now 52, reflects on how 28 was both a tumultuous and transformative year.

My life at that moment was not what you would expect. I left Living Single a few episodes shy of completing the final season because the work, the process, and everything else didn’t feel the same for me. I was at that point either divorced, or about to be divorced. I started a production company, and we had all these great projects but no deals.

I went through a stage where I completely shut down. I had these blackout drapes in my house, and I closed the drapes and stayed in the bed for about two weeks, maybe longer. I kept running down my resume to God: I’m a tither, I’m a worshiper, I’m faithful, I’m a good person, I was a good kid — all the things that should not equal me being here. I didn’t claim depression, but if I’m being real with myself, I’m sure there was a little bit of that there.

How did you get through that difficult period?

I saw an interview with Liza Minnelli, who talked about how she got herself together after a tough time. She said, “I looked at my father’s work, and I realized I come from that stock.” That shifted my atmosphere. I went outside and looked at the mountains and the sky, and that was me looking at God’s work. I said, “I come from this stock.” It’s not like I’ve never been severely disappointed since then, but now I can recognize it and to a certain extent, I know how to deal with that disappointment.

Did you ever feel like you “made it” once you stepped out of child stardom with Living Single?

With [the role of] Régine, I never really had that sense of “I’ve arrived” because I don’t know what it is I’m trying to arrive to. If anything, I used to thank my sanity like, “Oh, I still have that, I must’ve made it,” especially considering that I’m a former child star. With Living Single, I saw it as a great opportunity to be a character I’ve never done before. I look at my work as a craftsman — you do all the work that goes into creating something that’s beautiful, iconic, strong, or whatever it may be. That’s how I looked at Régine, because she was so different from me.

It’s been widely reported that Friends was inspired by Living Single. Did you have any inclination of how groundbreaking the show was back then?

No. When you’re in it, you just think, “I’m going to work.” After a while, you realize it’s successful, but you certainly don’t realize the impact. Even with Facts of Life, we knew that we were successful because we were on nine years, but the thing about it is you really don’t feel impact until the impact has happened. When we were doing Living Single, I had no idea of the impact or the imprint that it was going to make.

You’ve directed over a dozen shows, including Kenan & Kel and Meet the Browns. At 28, did you have bigger aspirations for directing?

When I started directing [in the late ’90s], it was during a time when Malcolm Jamal Warner, Blair Underwood, the Hughes brothers, and others such as myself weren’t being offered the types of roles we wanted to do in front of the camera. They weren’t checking for us, so we started directing, writing, and trying to do our own projects. I wasn’t going to sit around and wait for my agent or my manager to call and say, “Somebody wants you to be in this.” At that point, I knew that I wanted to be a storyteller, because that puts you more in the driver’s seat.

What were your goals at 28, and did you feel confident you’d achieve them back then?

I wasn’t in that Mary Tyler Moore mode of throwing my hat in the air and feeling like the world was before me. My goal was, “You can’t trip to the point of losing your sanity. Your village has put too much into you to do that to them.” I didn’t want to become a statistic or a has-been.

At 52, do you feel like you’re beginning to figure things out?

I’ve not really made that my goal. Not letting life kick my ass on a consistent basis — that part, I think I have figured some of it out. The lens that I look through now comes from a mindful place, and a place of leaning into whatever the moment is for me at this stage. You know how in The Avengers when Hulk grabs Loki and flips him around? I’m not going to be Loki and life is not going to be Hulk. Life is not going to ever beat the sh*t out of Kim Fields.

Get comfortable sooner in your pursuit of being a badass and owning the concept of being a badass and all that it takes. Every part of me that is intelligent, that is strong, that is sensual or sexual, everything about being grown and not giving a good f*cking goddamn sometimes — all of that is really OK. That to me is being a badass on top of being the dopest craftsman that you can be in whatever your craft is. That’s the sweet spot, and that’s where I am now.

More like this
At 28, Debra Jo Rupp Was Living A Much Different '70s Show
By Grace Wehniainen
At 28, Rosie Perez Risked Her Career To Stop Playing Stereotypes
By Gabrielle Bondi
'That '90s Show' Star Callie Haverda Got Advice From Mila Kunis & Ashton Kutcher
By Brad Witter
'Bling Empire: New York’ Star Dorothy Wang Wants To Try 'The Simple Life'
By Alyssa Lapid
Get Even More From Bustle — Sign Up For The Newsletter
From hair trends to relationship advice, our daily newsletter has everything you need to sound like a person who’s on TikTok, even if you aren’t.