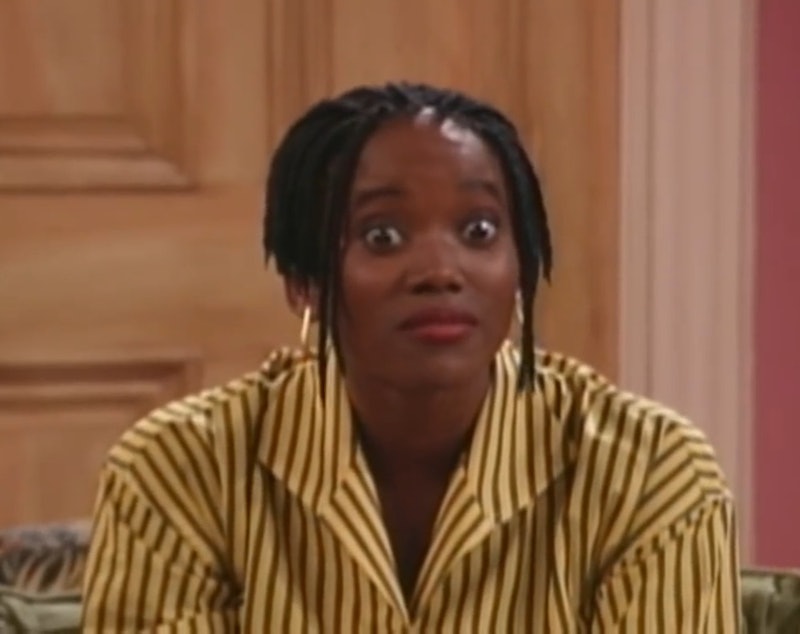 In a '90s kind of world, fans were glad they got their girls — all four of them. But, in a piece of news that's quite literally unfathomable now, Living Single almost didn't include Maxine Shaw (played by Erika Alexander), according to showrunner Yvette Lee Bowser. The reason? Production execs feared the presence of the beloved attorney character — who Bowser described, during a recent Netflix "Making a Scene" panel, as "unapologetically Black and female and fierce" — would prevent the series from being picked up.

Bowser, now the showrunner for Dear White People, didn't back down — and proved them all wrong for the process. As it turns out, Alexander was just as in the dark as you were about the behind the scenes drama. She told Bustle in a statement:

“I was always aware that Max was just supposed to be an ancillary character, but up until just a few weeks ago I did not know that Yvette had a previous battle, before I was even cast, to keep the character in the show. This is proof positive that we need to create more authentic characters of color, and more importantly, be ready to defend their very existence. Change is a blood sport.”

Living Single, which Fox aired from 1993 to 1998 centered on a "tight like glue" crew of Brooklyn-based friends that also included: Khadijah (Queen Latifah), Synclaire (Kim Coles), Regine (Kim Fields), Overton (John Henton), and Kyle (T.C. Carson). When Fox picked up the now-iconic series, Bowser officially became the first African American woman to develop a primetime series. As she described during the Netflix panel, however, although it was a "pivotal and career-defining moment," receiving the instructions to cut Max was the moment she "felt unseen in this business."

Still, Bowser, who also wrote and produced Half & Half and A Different World, didn't give up because Max's strong-willed (and hilarious) character represented all of the things, if she wasn't at the time, she "wanted to be ultimately." As she further elaborated: “I knew that that would be a powerful force in the world because I know that our art is ... our activism, and I knew that that voice had been missing.”

She continued, "Even though I had everything to lose, I stood my ground and said to take Maxine Shaw out of the show is to take a big part of me out of the show and I’d rather not do the show.”

Even more than two decades later, Max's legacy remains undeniable. During a March 2018 interview on The Breakfast Club, Alexander shared that many people — including Baltimore State's Attorney Marilyn Mosby — have told her that Max inspired them to pursue law careers.

"You meet people and they say hello and then they tell you something special like that and then you realize that representation matters," said Alexander, who co-founder Color Farm Media to promote diversity in film, TV, and other digital channels. "And there I was and I hadn't gone to college — and I still haven't — and I was being a lawyer. But I just graduated high school and kept working because my father passed, I helped my mother, and here I was helping people go to college and become lawyers."

Both Bowser and Alexander are living proof that, as Queen Latifah raps in the Living Single theme song, whenever this life gets tough, you gotta fight. And, because of that, a whole generation of women got a role model to inspire them — and keep them laughing — all through the '90s and beyond.