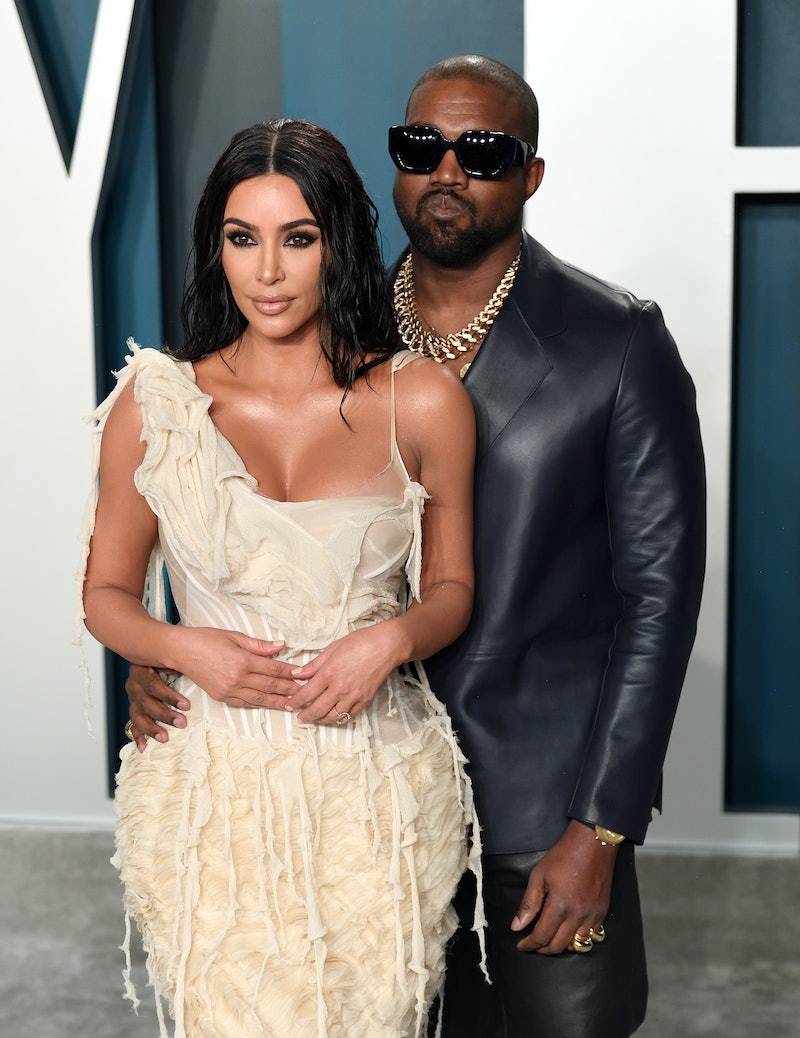 Despite early reports that Kim Kardashian and Kanye West’s split was an amicable one, it seems the two are no longer on speaking terms. According to a new Page Six report, the rapper has reportedly changed all of his phone numbers, making it impossible for the Skims founder to reach him directly.

“Even before Kim filed for divorce, Kanye changed his numbers and said, ‘You can contact me through my security,’” a source told the outlet. However, despite this reported arrangement, the insider revealed that the two are still co-parenting successfully. “She trusts him around the kids. He loves them and is seeing a lot of them,” the source added. Bustle has reached out to their reps for comment and will update this story if we hear back.

Though not ideal, the system Kardashian and West currently have in place is reportedly working, and it allows both of them to spend time with their four children — North, 7, Saint, 5, Chicago, 3, and Psalm, 1. “She leaves the house, and he arrives and hangs out with the kids,” the source continued. “They have an army of nannies so the transition is easy.”

This new KimYe update comes less than a month after TMZ reported that Kardashian officially filed for divorce after almost seven years of marriage. Per the outlet, the reality star requested joint legal and physical custody of their four kids, which West agreed to. TMZ also reported that the two are committed to co-parenting. This is in line with what Page Six reported in January, when the outlet first broke the news of their split.

“They are keeping it low-key but they are done,” a Page Six insider said at the time. “Kim has hired Laura Wasser and they are in settlement talks.” Wasser has represented many celebrities in the past, including Ryan Reynolds, Angelina Jolie, Britney Spears, Gwen Stefani, and more. The attorney was also hired to handle Kardashian’s 2013 divorce from basketball star Kris Humphries.

Reaching a settlement wasn’t all that complicated, according to Page Six, especially since Kardashian and West signed a prenuptial agreement when they got married in 2014. “It was an easy case of ‘You keep your money and I’ll keep mine,’” a source revealed. The issue of who would get their house, however, was a different story.

In January, an insider told Page Six that the KKW Beauty founder was “trying to get Kanye to turn over the Calabasas house to her because that’s where the kids are based and growing up.” Fortunately, it seems things worked out in her favor. “Kim owns all the land around the house, but Kanye had bought the house himself, then they split the cost of the renovations,” the source said in February. “Kim fought to keep the place because it is their children’s home, and she won.”

More like this
Everything You Need To Know About Kanye's Post-Kardashian Dating Life
By Bustle Editors
Kim Kardashian Gives “Bucket List Dream” Lecture At Harvard
By Alyssa Lapid
How Khloé Kardashian & Family Supported Tristan Thompson At His Mom's Funeral
By Brad Witter
North West Will Make Her Acting Debut Alongside Mom Kim Kardashian
By Radhika Menon
Get Even More From Bustle — Sign Up For The Newsletter
From hair trends to relationship advice, our daily newsletter has everything you need to sound like a person who’s on TikTok, even if you aren’t.