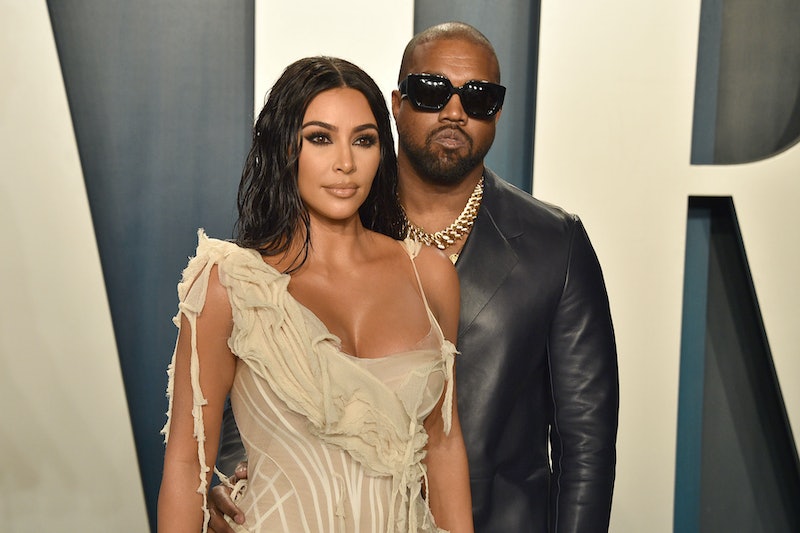 Almost a month after the news first broke that she and Kanye West were planning to go their separate ways after six years of marriage, Kim Kardashian is reportedly hammering out divorce details before filing. Though the couple still hasn't officially confirmed the split, Entertainment Tonight reports that Kardashian has been working to iron out a potential financial settlement and custody agreement in advance and is considering all the angles. "Kim definitely has all of her ducks in a row with regards to the kids and financials in case she decides to officially file [for divorce]," a source told the outlet.

While multiple outlets have reported that she and West are living "separate lives," the source explained that Kardashian still cares about her husband, and wants to make the entire process as easy as possible on him and their four children. "Kim still loves and supports Kanye and wants the best for him and their entire family," the source added. "They are obviously still evaluating what that looks like exactly, but Kim is prepared across the board for anything that might come her way. Kim is worried and concerned that Kanye is not mentally stable enough to be the dad that their family needs."

Kardashian's primary concern right now is reportedly her kids — 7-year-old North, 5-year-old Saint, 3-year-old Chicago, and 1-year-old Psalm — and finding a way to co-parent them with West going forward. "Kim and Kanye's hope for the future is that they can healthily co-parent their children and raise them together without any problems or difficulty and keep their personal lives and any issues out of the public eye for the sake of their little ones and the entire family," the source told ET. "The kids have an idea as to what’s going on, but Kim tries to keep it light and position the situation as a good thing — that their dad is taking some time to reflect and get healthy and that they will see him soon when he’s doing better."

On Jan. 4, Page Six reported that "divorce is imminent" for Kardashian and West but that the SKIMS founder was waiting for the right time to officially file the paperwork. "They are keeping it low-key but they are done," a source told the outlet at the time. "Kim has hired [celebrity divorce attorney] Laura Wasser and they are in settlement talks." According to the outlet, West has primarily been living at their home in Wyoming, while Kardashian has been staying in California with their children; the couple also reportedly celebrated the holidays in different states. "Kim got Kanye to go up there [Wyoming] so they could live separate lives and quietly get things sorted out to separate and divorce," the source said. "She's done."

Despite all of the issues, E! News reported on Jan. 5 that Kim is hesitant to officially begin divorce proceedings until everything has been settled. "She wants to make sure she's making the right decision for the kids," a source close to the couple explained. "It's not about the marriage anymore, she'll always care for Kanye but it's over between them. Kim is only focused on what's best for the kids. It's a tough decision for her and she's figuring it out."

There could also be another factor preventing Kardashian and West from moving forward with their divorce: The couple's split will reportedly be addressed on the final season of Keeping Up With the Kardashians, which premieres March 18. "The Kardashians intend to go out with a bang," Page Six reported on Jan. 20. "They've filmed Kim discussing her marriage problems. But everybody involved is on a nondisclosure agreement, because the finale won't screen until later in 2021." If and when the couple does decide to finally split, it seems like Kardashian will have done her best to make sure that their family can handle it.

More like this
Everything You Need To Know About Kanye's Post-Kardashian Dating Life
By Bustle Editors
Khloé Kardashian Writes Touching Instagram Tribute To Tristan Thompson’s Mother
By Alyssa Lapid
North West Will Make Her Acting Debut Alongside Mom Kim Kardashian
By Radhika Menon
Did Pete Davidson Remove His Kim Kardashian Tattoos? Photos Point To Yes
By Alyssa Lapid
Get Even More From Bustle — Sign Up For The Newsletter
From hair trends to relationship advice, our daily newsletter has everything you need to sound like a person who’s on TikTok, even if you aren’t.