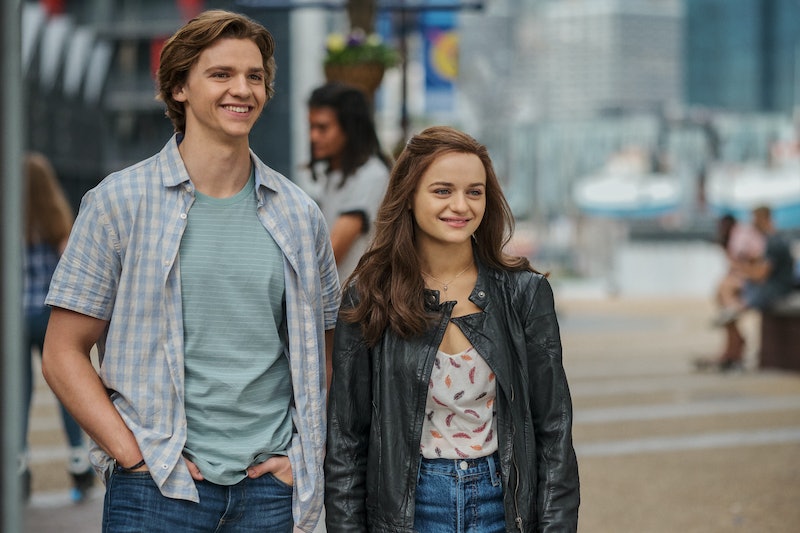 Spoilers for The Kissing Booth 2 ahead. Anyone concerned that Elle's college cliffhanger from the end of The Kissing Booth 2 wouldn't be resolved can rest easy, because on Sunday, July 26, Joey King announced that The Kissing Booth 3 is coming to Netflix in 2021. And that's not even the best part. The third movie in the franchise has already been filmed, which means there's no way its premiere can be delayed due to the ongoing coronavirus pandemic.

It seems that Netflix managed to secretly film the second and third movies at the same time during their South Africa shoot, as reported by Variety. The streamer previously pulled off a similar rom-com coup when it was announced that the third To All the Boys... film had been filmed alongside the second. (The final movie in that teen favorite franchise is expected to premiere on Netflix in 2021, too.)

The Kissing Booth 2 premiered Friday, and instantly left fans on social media clamoring for more. In the second movie, Elle finds herself torn between her boyfriend Noah, who is now away at college, and new student Marco. While Elle ultimately realizes she's still in love with Noah, the movie ends on a cliffhanger as she must decide between attending college at Berkeley with her best friend, Lee, or heading to Harvard to be with her boyfriend. Elle will mull over her choice during the summer after high school graduation, as previewed in Netflix's first look at the third movie, which sees the recent college grad getting a call from the Harvard admissions office while she hangs at the pool with her best friend and Noah.

Rather than answer the call, Elle heads off for some private time with Noah. When Lee asks where they're going she teases, "Noah wants to read me poetry and tell me all about his feelings."

King and her castmates spilled the Kissing Booth 3 news during a livestream fan event, which was quickly followed by official confirmation from Netflix. The streamer shared an adorable video featuring King and Joel Courtney accidentally texting the news to everyone they know. "Well, I guess we can celebrate now," Courtney says before King tackle-hugs him.

The Kissing Booth 2 is currently the number one movie on Netflix in the United States, as of Sunday, and enthusiasm for the franchise is showing no signs of winding down. Thankfully, Netflix's sneaky filming tactics mean viewers won't have to say goodbye to Elle, Noah, and Lee anytime soon.

More like this
Here’s Everything Coming To & Leaving Netflix In February
By Jake Viswanath
Ozzie’s Coming Out Scene With Kitty On 'That ’90s Show' Has Twitter Sobbing
By Brad Witter
The Mysterious Gunther Corporation From 'Gunther’s Millions' Has Dissolved
By Brad Witter
The 'Freeridge' Cast Shared Their Hopes For A Potential Season 2
By Grace Wehniainen
Get Even More From Bustle — Sign Up For The Newsletter
From hair trends to relationship advice, our daily newsletter has everything you need to sound like a person who’s on TikTok, even if you aren’t.