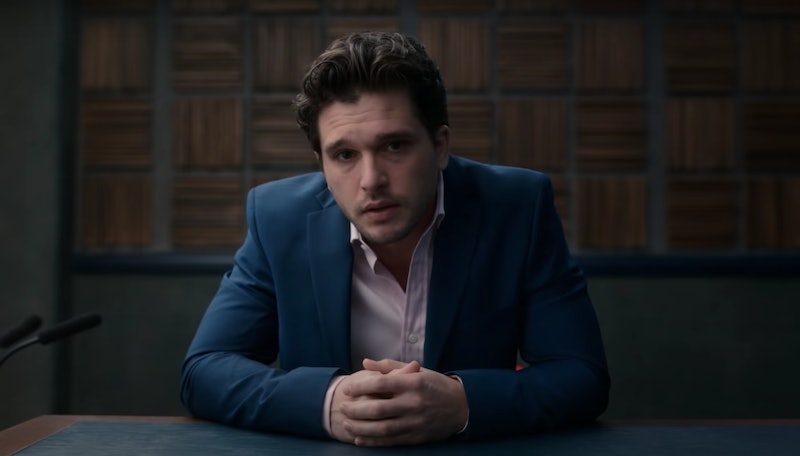 Crime drama fanatics are in luck this autumn. Netflix announced that series two of Criminal would be coming later in 2020, a series that places viewers right at the heart of the action in a police interrogation room. And while the cast of cops will be returning from series one, there are some all-star new suspects. Kit Harrington will appear in series two of Criminal as a very nervous suspect in a very fancy suit – a big step away from Jon Snow in Game of Thrones.

In the trailer for season two of Criminal, a suited up Harrington can be seen tapping the table, shaking his leg, and looking seriously under pressure. I’d be scared too if I was facing questions from Tony Myerscough (played by Lee Ingleby). While it’s yet to be revealed what exactly Harrington is being questioned for, the trailer makes it clear this series is going to be super tense. And Harrington is joined by some other acting heavyweights: The Big Bang Theory's Kunal Nayyar, creator and star of Catastrophe Sharon Horgan, and acting legend Sophie Okonedo.

Viewers will be pleased to hear that, while the crimes and suspects are new this season, Katherine Kelly, Rochenda Sandall, Nicholas Pinnock, Shubham Saraf, and Lee Ingleby will all be returning as the police officers ready to pick at the suspects' story. Season one of Criminal was praised for being shot like no other crime drama and showrunner George Kay told Cosmopolitan, "Normally what we've done in a crime drama would be one scene in a crime drama, but we've spun it into the whole show. The twists have to come from something other than finding a piece of evidence, it has to come from human behaviour. The rise of an eyebrow, the change in breathing. These things that seem so small, suddenly become vast in the show."

If you can’t wait to see Harrington in action then you can catch season two of Criminal on Netflix from Sept. 16.