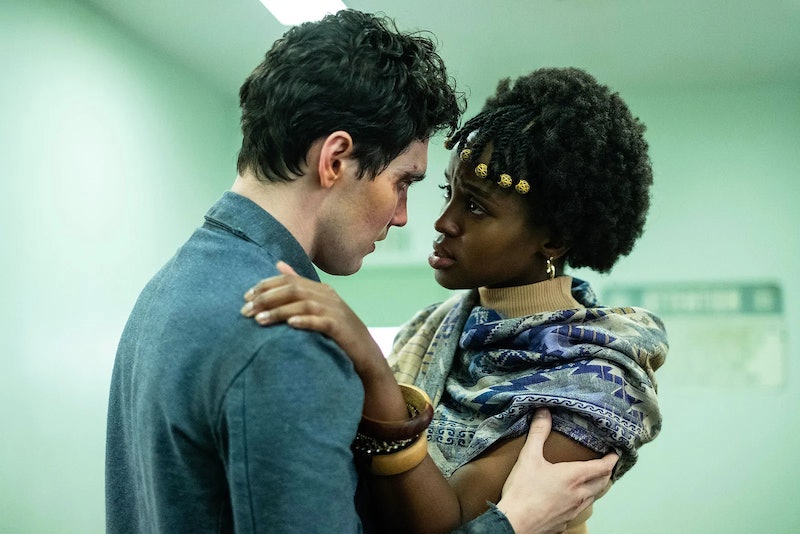 Spoilers ahead for the ending of Knife Edge & Noughts & Crosses season two.

A classic franchise of the YA world by British author Malorie Blackman, the Noughts & Crosses series of books tells the story of an alternative world where Black "Cross" people colonised and rule over white "Noughts". The series is made up of six books and three novellas and in 2020, the first book Noughts & Crosses was adapted and produced into a BBC series starring Jack Rowan and Masali Baduza as Callum and Sephy. And now we’ll be getting a second instalment of BBC’s Noughts & Crosses, but will season two follow the second book, Knife Edge. But how does the Noughts & Crosses sequel end?

First things first: the BBC adaptation ends in a very different place to the book, which left a lot of viewers rather puzzled. In the show Callum is still alive and on the run with Sephy, rather than executed as he is in the end of the book. Herein lies the first major deviation between book and screen. Callum’s death really forms the basis of the second book.

Author Blackman clarified things in March 2020 via Twitter, saying the first season “only tells three-quarters of the story,” meaning that season two of the BBC adaptation will likely pick up at the end of the first book and then continue into the events seen from Knife Edge.

The sequel follows Sephy as she attempts to navigate motherhood with her daughter, Callie Rose, living with Callum’s mother, Meggie. The book also focuses a lot more on Callum’s brother, Jude, as he blames Sephy for the suffering his family has endured and sets out to exact revenge on Sephy by any means necessary, which is how he meets Cara, a “Cross” who he gets involved with in order to access her money.

Jude and Cara end up falling in love with each other, but frustrated with the affection he holds for a “Cross”, Jude severely beats Cara and runs off with her finances in tow. Cara tragically dies from her injuries and Jude is eventually arrested and charged with her murder.

Watching Meggie in pain once again after losing yet another son, Sephy decides to give Jude a false alibi for Cara’s murder, which works as Jude only spends a few months in prison for unrelated charges. This doesn’t improve relations between Sephy and Jude though, as he still blames her for Callum’s death and is dead set on revenge.

Sephy’s life becomes increasingly difficult: the Crosses hate her for helping Jude evade the death sentence for Cara’s murder, and the Noughts hate her because she didn’t intervene on Jude’s behalf sooner. Sephy sings ‘Rainbow Child’ to Callie Rose whilst hugging her too tightly and when she stops breathing, Meggie shouts at Sephy “What have you done?” ending Knife Edge on quite the cliffhanger: is Callie Rose dead or alive?

We’ll have to wait and see if the second series of Noughts & Crosses follows Knife Edge or deviates into a new storyline, but in the meantime, here’s the trailer to get you excited.

The second series of Noughts & Crosses will air on BBC One and BBC iPlayer on April 26 at 10:40 p.m., with all episodes also being available to watch on BBC iPlayer.