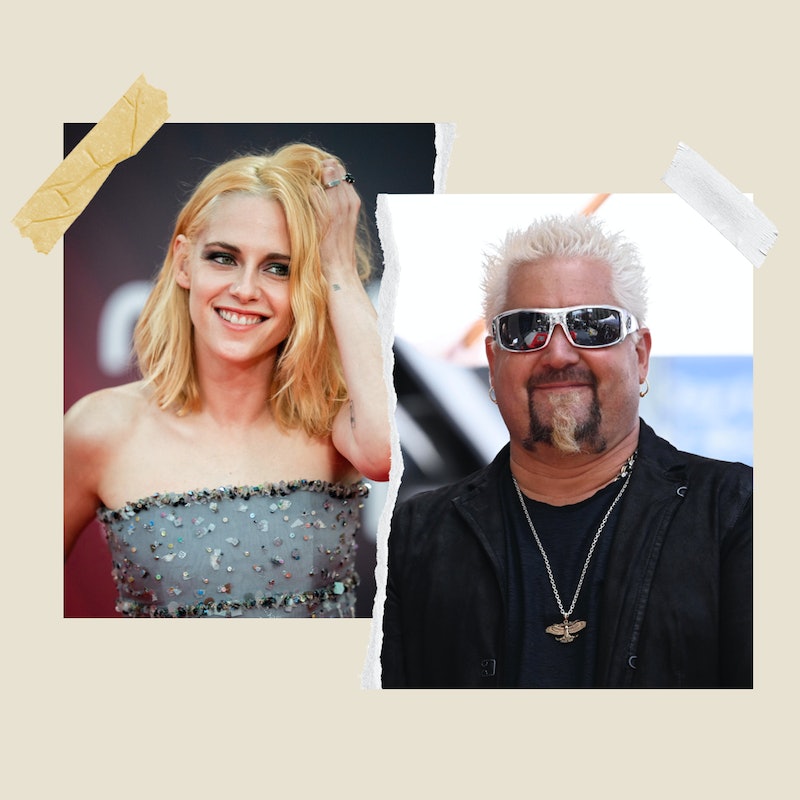 Kristen Stewart already knows exactly where she wants to get married: Flavortown. During an appearance on SiriusXM’s The Howard Stern Show earlier this week, the Spencer star announced her engagement to fiancée Dylan Meyer and admitted that the couple will likely officiate their wedding themselves. But that doesn’t mean that the couple would turn down an offer from the one and only Guy Fieri.

“We did hear that Guy Fieri from the Food Network officiates a lot of gay weddings,” Stewart told the radio host, hinting that the famous chef may be available. “The idea of that man — that sweet, sweet spikey headed man — coming to our wedding and officiating it, it just makes me laugh so much.” According to People, the Diners, Drive-Ins and Dives star made headlines in 2015 when he married over 100 LGBTQ+ couples in Miami in honor of his late sister, who was gay.

Although Stewart made her comment about Fieri in jest, it seems he might actually be down to stand alongside the couple as they exchange their vows. On Thursday, Nov. 4, Stewart appeared on the Today show, where hosts Hoda Kotb and Savannah Guthrie played a video of the chef accepting the offer. “I’ve heard from the Flavortown grapevine that you’re looking for a sweet, spikey-haired officiant for your wedding,” he said in the clip. “I’m all in.”

“Oh my God,” Stewart, 31, said after watching the video. The Twilight star also revealed that she “absolutely” wants to take the chef up on his offer. “Do you know where he lives? What’s his address?” she asked the co-hosts. “I’m like, ‘Does he live in L.A.? We should talk about this.’” If Fieri does, in fact, officiate Stewart’s wedding, this would be just one of many things she’s looking forward to on her big day.

“The food is the biggest deal,” Stewart told Stern earlier this week. “I don’t care about flowers and sh*t like that. The food needs to be on point.” She also said that she wants to wear “the best pair of Levi’s ever” paired with a T-shirt that has a tuxedo printed on it. “I want to get married in, like, Topanga,” she added. “I want to be chilling. I want it to be very homey. I want to see her laugh hysterically when she sees me in, like, a faux tuxedo T-shirt.”

The actor added that she wants the wedding to be in L.A. so that all of her nearby friends and family could attend. She also mentioned that she wants the event to be super relaxed. “I don’t want anyone walking down any aisles,” she continued. “We’re just going to, like, stand and do vows and f*cking party after. It’s kind of just a great excuse to get together and say ‘I love you’ in front of all your friends.”

One day after announcing her engagement on The Howard Stern Show, Stewart made an appearance on The Tonight Show Starring Jimmy Fallon, where she gushed over her soon-to-be wife. “[I] knocked it out of the park,” she told the late-night host. “I scored.”