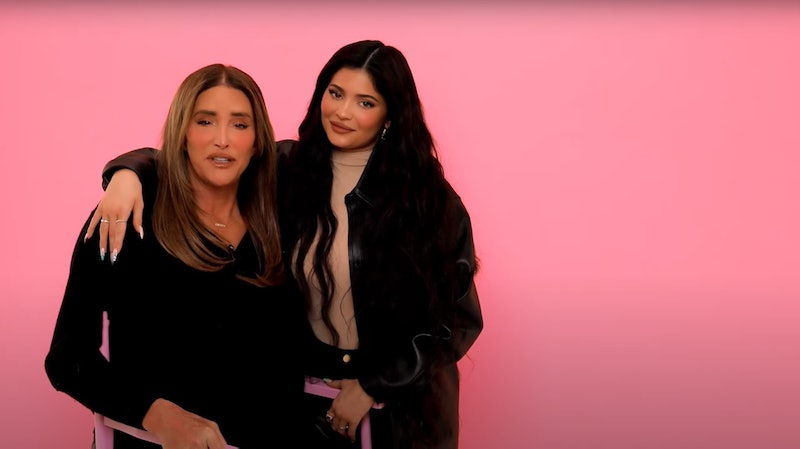 Caitlyn Jenner is finally in her famous daughter's makeup chair — and she couldn't be more excited. For a new YouTube video posted on the former Olympian's channel, Kylie Jenner did Caitlyn's makeup for the very first time, which both of them described as being a "highlight of my life." In the clip, which was posted on Feb. 6, Caitlyn explains that she was struggling to find someone to do her makeup for a lunch date, before realizing that she already knew the perfect candidate.

"My little Kylie! She's going to do my makeup. I'm so excited; she's never done it before," Caitlyn says in the video, before taking viewers on a tour of the 23-year-old's Los Angeles headquarters on the way into the filming studio. "This is the highlight of my life," Kylie said, to which Caitlyn responded, "It's the highlight of mine!"

The Kylie Cosmetics founder continued to share her delight at getting to give Caitlyn the signature "glam," explaining that the video is a collaboration that has been in the works for some time. "We've been talking about this for forever," Kylie said. "We saved this special moment for you guys because this is going to be the first time that I ever do my dad's makeup."

As Kylie went to work, the pair talked about a variety of topics, including Caitlyn's YouTube channel and motivational videos, and finding their passions in life, and why she and Kendall refer to Caitlyn as their "dad" despite her transition. "Sometimes people get really confused when Kendall and I still call you dad," Kylie said. "I know we had a talk a few years ago, and you were OK with us still calling you dad. How do you feel about that now?"

"It was one of the best decisions I made," Caitlyn responded. "And sometimes this community can be pretty tough, especially when it comes to pronouns and everybody's got an opinion, and on and on and on. But I really felt from the beginning that I got to do it my way that works for me, and everybody out there has to do it their way, which works for them."

The former decathlete then explained that though she's a woman, she still sees herself as Kendall and Kylie's father. "Some people say, 'Oh, you're the mother.' No, I'm not — I'm the dad, and I've been the dad the whole way. I will be their father until the day they die, or I die," Caitlyn said. "You and Kendall always say, 'My dad, she,' and it's tough to change the pronouns in the middle ... and every time I hear it I go, 'Yeah. My girls, they're just on it.'"

Caitlyn also touched on the ways her relationships with her children have grown stronger since she decided to come out as transgender in 2015. "I was 65 years old before I finally came through this. It's like I had to raise everybody else and I had such a life, and finally, it was my time to be me and live my life," she revealed. "I didn't think I could do it. And then I did it and you guys have been my best friends. My kids have been absolutely wonderful in all of this." Kylie responded by explaining that she loved Caitlyn unconditionally: "I want you to be able to be free and be yourself. There's just no other way anyone should live."

More like this
Everything You Need To Know About Kanye's Post-Kardashian Dating Life
By Bustle Editors
Kylie Jenner Wore Platform UGG Boots, Kendall's Favorite Cheugy Trend
By Alyssa Lapid
North West Will Make Her Acting Debut Alongside Mom Kim Kardashian
By Radhika Menon
'Love Island's Will Got A Farm Animal Manicure & It's *Adorable*
By Sam Ramsden
Get Even More From Bustle — Sign Up For The Newsletter
From hair trends to relationship advice, our daily newsletter has everything you need to sound like a person who’s on TikTok, even if you aren’t.