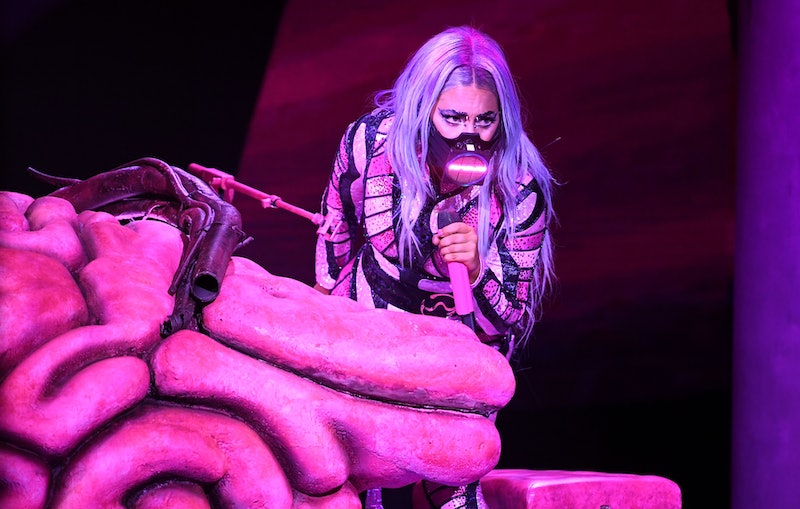 Faced with the challenges of producing an awards show in the age of COVID, many of the 2020 MTV VMAs performances looked more like music videos than live entertainment. As such, viewers were quick to point out on Twitter which artists were lip syncing at the VMAs — and Lady Gaga wasn't one of them. In addition to Gaga, whose set featured a "Rain on Me" duet with Ariana Grande, other performers included BTS, Miley Cyrus, The Weeknd, Doja Cat, Black Eyed Peas, DaBaby, Maluma, and CNCO. Other acts, such as Chloe x Halle, Machine Gun Kelly, and Lewis Capaldi also hit the stage as part of the pre-show programming — and no act was immune from fans speculating on whether they were singing or lip syncing.

Although some viewers spotted some particularly cringeworthy lip syncing, Gaga's Little Monsters believed that she stood out from the pack — even playing a brain-shaped piano during a medley of "Enigma", "Chromatica II", "911," "Rain on Me" (featuring Grande) and "Stupid Love". While one fan pointed out the musician was actually singing live and dancing in heels, thus solidifying her place as "one of the greatest performers of all time," another added that she and Grande did all of this while wearing masks, too.

The Little Monsters weren't the only fans defending their fave against lip sync accusations: BTS' Army went to battle in the name of K-Pop greatness on Twitter, insisting that the band was singing live. "Locals thinking bts didn’t sing live. Oh honey you just ain’t used to good live vocals," tweeted one viewer.

Lady Gaga's live performance was a breath of fresh air for viewers, who were less than impressed with other performers who seemed to lip sync (though, one can never be sure). Fans on Twitter called out everyone, from Cyrus to Doja Cat, and even the awards themselves.

It looks like fans might have to wait until award shows are *actually* live again for, well, live performances. Unless you just want to watch Gaga on a loop, that is.