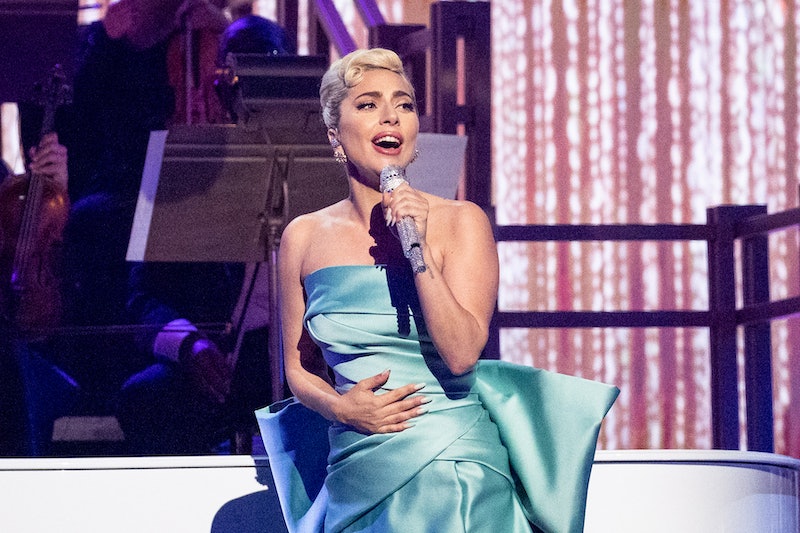 A new cinematic love theme is about to take flight: Lady Gaga released the first snippet of “Hold My Hand,” her new song from the Top Gun: Maverick soundtrack on Friday, April 29. “I won’t let go ’til the end,” the 13-time Grammy winner sings amid violins and swelling drum kicks, stopping just short of what is sure to be a soaring chorus to follow when the full song drops on May 3. A black-and-white video of Gaga seated beneath the wing of a prop plane also accompanied the 10-second clip, which previews a power ballad poised to give Berlin’s “Take My Breath Away” a run for its money.

Days earlier, the singer revealed that she’d been working on “perfecting” the song from the Top Gun sequel (out May 27) for years. “I wanted to make music into a song where we share our deep need to both be understood and try to understand each other—a longing to be close when we feel so far away and an ability to celebrate life’s heroes,” she captioned her April 27 Instagram post, in part. “This song is a love letter to the world during and after a very hard time. I’ve wanted you to hear it for so long.”

Tom Cruise reprises his 1986 role of Captain Pete “Maverick” Mitchell in Top Gun: Maverick, and, in addition to Val Kilmer also returning as Iceman, he’ll be joined by franchise newcomers Jennifer Connelly, Jon Hamm, Glen Powell, Miles Teller, and Jay Ellis. After thanking Cruise, director Joseph Kosinski, Oscar-winning composer Hans Zimmer, as well as her collaborating music producers BloodPop and Benjamin Rice, Gaga also dropped a couple additional “Hold My Hand” lyrics on Instagram: “But if you decide to / I’ll ride in this life with you / I won’t let go till the end.”

Though fans didn’t know their meaning at the time, the House of Gucci star had actually teased more song lyrics on Twitter earlier in the week. “Hold my hand everything will be ok I heard from the heavens that clouds have been grey,” read one April 25 tweet, absent of any additional explanation from the singer. In another, she wrote, “Pull me close wrap me in your aching arms I see that you’re hurtin’.”

Gaga also hinted in a December 2021 Entertainment Weekly interview that she was working on new music, igniting hopes that an LG7 album could be around the corner. “There’s always music in my heart, in the works. It’s just about [asking], ‘What will it be?’” she explained at the time. “I’m not ready to answer that yet. But what I will say is that... I’m always thinking about music. It just comes out in different forms.”

Worth noting: Berlin’s original 1986 Top Gun love theme took home the Oscar for Best Original Song after its release. Already twice-nominated in the same Academy Awards category (winning for “Shallow” from A Star Is Born in 2019), Gaga’s “Hold My Hand” could now follow a very similar flight plan.